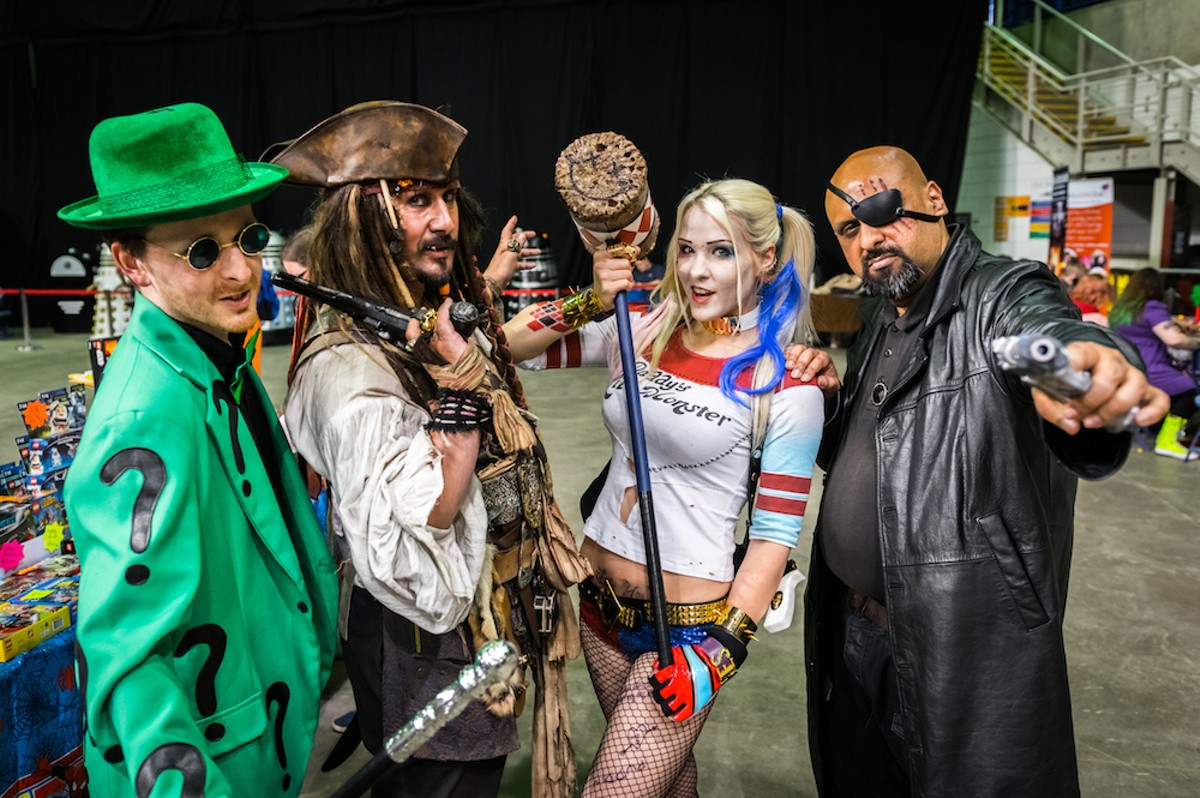 Halloween week is upon us. Desk jockeys, suds slingers, not-just-on-Halloween nurses and actual sexy janitors are excited to cast off their daily-grind duds, slip into something a little more festive (or gruesome) and venture into All Hallow's Eve.

So, too, then, descend the seasonal Halloween costume stores, cropping up like so many Children of the Corn in strip malls across Central Florida. Rainbow wigs, pixie wings and nylon leotards hang in plastic bags, ripe to suit every Orlandoan's create-a-disguise druthers. But veteran cosplayers Amanda Brooks and Kitty Christian want you to know those pre-bagged Halloween duds aren't all they're cracked up to be.

"It's really exciting to watch people grow from buying a costume off the rack to making their own," Brooks says. Brooks and Christian have 40-plus years of costuming experience between the two of them, with both women starting their cosplay careers as kids diving into their parents' cartons of old clothes and eventually building bigger and better costumes.

"I've pretty much been cosplaying since I was a kid, maybe 8 years old, just cobbling together costumes from my parents' clothes," Christian says. "One of my first cosplays was of a cat – a cat woman, if you will. I had some tights, a leotard – the tail was made from this long black pipe cleaner, and my mom helped me make the cat ears."

The term "cosplay," a portmanteau of "costume play," was first coined in Japan during anime's meteoric rise in popular culture throughout the 1980s, but fandom's favorite pastime of dressing up as beloved fictional characters might go back further — 100 years further. Back in April 1876, science-fiction pioneer and badass emeritus Jules Verne threw a masked ball attended by more than 300 guests, all dressed as characters from Verne's prodigious bibliography. Now tens of thousands of comic, gaming, film and anime fanatics like Brooks and Christian cosplay at massive fan conventions like Comic-Con, MegaCon and Spooky Empire (in Orlando this weekend!).

"It's the opportunity to be something else, to take some of the aspects of who I am and blow them completely out of proportion and become something else," Brooks says. "I'm a fairly shy person. At work, when I put my scrubs on, it's like putting a cosplay on. This is an aspect of my personality that I'm blowing out of proportion – the caregiver, the assertive professional."

Cosplaying at a convention might have a different vibe from the legions of sexy cats and racially insensitive hombres packing downtown Orlando every Halloween, but cosplayers' craft and expertise translates across the geek-nerd divide. Luckily, Brooks and Christian are happy to share their top tips and advice for the amateur reveler.

WEAR YOUR OWN CLOTHES

The best pieces of your soon-to-be flawless Halloween costume are probably already hanging in your closet, Christian says.

"If you want to be a cowboy, wear your own jeans and maybe buy some cowboy boots," Christian says. "If you actually use real clothing, it gives authenticity to the costume that you won't get out of a bag."

THRIFT STORES ARE YOUR BEST FRIENDS

Where there's a Goodwill thrift "boutique," there's a way to buy those last costume pieces on the cheap to make your last-minute costume something truly unique.

"You can find so many pieces at secondhand places," Brooks says. "You don't have to go expensive. You just need it to look right."

SO IS A SEWING MACHINE

Say you've been wanting to learn a new craft and at the same time, your sad, bagged Stranger Things "Eleven" costume could use some extra detail. Snagging a simple sewing machine and mastering its use can give old clothes and store-bought costumes alike another layer of depth.

Even if your Tobias Bluth "blue-face" body paint costume absolutely slayed on Orange Avenue Tuesday night, you probably don't want to wear it to your buttoned-up day job for a whole week after the fact.

"Apply whatever makeup or dye to a small area and make sure it washes quickly and cleanly before going all in," Christian says. "It would be important to know [ahead of time] if you need to buy any special removers for the day after."

Dressing up for Halloween often means stepping out of your comfort zone and putting on a fantastical persona. Just don't let that persona be "Furiously Itchy-Face Person."

"There are lots of people who've worn masks not knowing they were allergic to latex," Brooks says. "Having an allergic reaction on your face is just no fun."

The only thing spookier than vampire-red peepers on Halloween is an excruciating eye infection caused by dirty vanity lenses. If you're going to be brave and pop in some special-effect contact lenses this Halloween, make sure they're sanitary.

"They often aren't sterile when you get them, and you don't want to put lord-only-knows-what in your eyes," Brooks says. "I've seen some people have really bad reactions from that. Make sure you buy your contacts from a reputable dealer."

You're not winning the Witching Hour if your walking shoes go all Walking Dead and fall apart during the night, and bruised, bloody feet do not a night of trick-or-drinking make, Brooks says.