Universal CityWalk Hollywood is selling Butterbeer, no park admission required. Is it a sign of things to come? 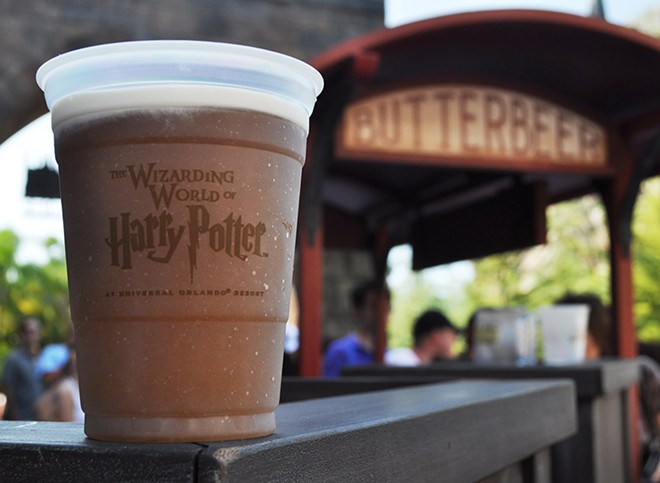 Photo by Jennifer Huber
Universal Studios Hollywood has faced closures since March as California embraces a science-backed response to the pandemic. While that may result in saved lives for Southern California’s theme parks, it’s meant months of no income. Knott’s, SeaWorld and, more recently, Disney have gotten creative by opening retail and food offerings in sections of the still-closed parks. Universal Studios Hollywood, which suffers from a multi-level layout that makes physical distancing difficult, has taken a different approach. 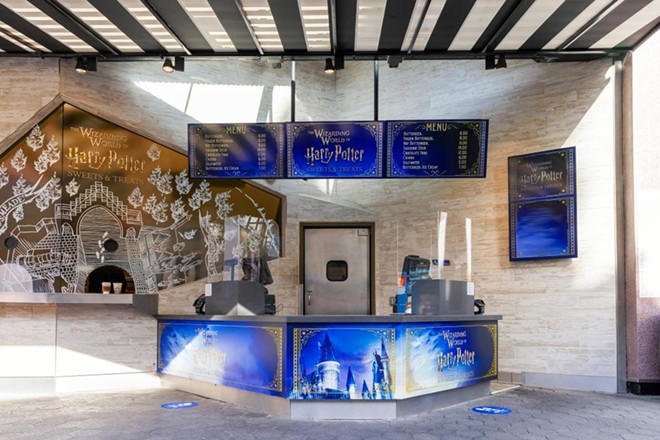 As per Los Angeles county requirements, all restaurants in CityWalk Hollywood, including the Butterbeer kiosk, are currently serving takeout only. Universal has not specified how long the kiosk will remain, and there are currently no public plans for a similar stand at the CityWalk in Orlando.

But the stand is a surprise, considering how strict both Universal and Warner Bros. have been regarding the Potter franchise. For Universal, butterbeer has proven to be a major attraction and a must-try for nearly every tourist visiting the Wizarding World. The move to sell Butterbeer where a theme park admission isn’t required sets an interesting precedent for Universal.

Now found in four of Universal’s five theme parks, including in both of their Orlando theme parks, the Wizarding World is credited with saving the company when it first opened at Orlando’s Islands of Adventure a decade ago. While temporary, the move could open the door for Universal to add more of a Potter presence outside of the parks.

The ability to harness the Potter brand in new ways, including ones outside of costly custom-built fully immersive lands, may allow Universal to compete against an increasingly concerning rival, Warner Bros. itself.

It’s no secret that Warner Bros. has been looking at ways to capitalize on the high-grossing themed entertainment industry. Their studio tour attraction, not far off from Universal Studios Hollywood, has seen major new investments in recent years, including the addition of its own Halloween Horror Nights knockoff event. In New York, Warner Bros. is planning to open its own Harry Potter store. The three-story, 20,000-square-foot retail experience will offer exclusive merchandise including wands, and numerous food and beverage offerings. 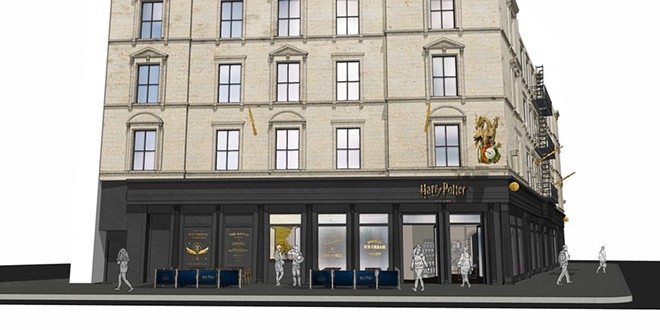 Image via Harry Potter New York
Concept art for the Harry Potter flagship store opening in 2021 at 935 Broadway in New York.
Last year, the Warner Bros. Studio Tour "London – The Making of Harry Potter" rolled out a new expansion and an updated gift shop where guests can now purchase bottled Butterbeer. A second Potter Studio Tour attraction is currently under construction in Japan. The company also purchased the chain of Platform 9¾ stores, now with stores at Gatwick and Heathrow along with the expanded original location inside the Kings Cross Station. Last year, the studio also purchased another attraction, the London Film Museum.

About an hour away from Universal’s failed attempt at a Middle East park sits the Warner Bros. World Abu Dhabi theme park. As one of the largest indoor theme parks globally, Warner Bros. World has fully fleshed out lands based on many of Warner Bros.' biggest intellectual properties, including DC Comics and Looney Tunes. The Abu Dhabi park isn’t owned by Warner Bros., but that hasn’t stopped rumors that the company is now interested in opening similar parks in Europe and North America.

An agreement by Six Flags for the rights to select Looney Tunes characters and the comic book versions of the DC Comics characters, such as Batman and Superman, is up for renewal toward the end of the decade. Some insiders, including industry analyst Robert Niles and reliable insider Josh Young, surmise that Warner Bros. plans to try to regain those rights as they ramp up their plans for new theme parks.

Ultimately, like Six Flags, Universal could lose the Potter rights. This, according to noted theme park writer Alicia Stella, is one reason that, even as the franchise ages and more fans turn away from it due to problematic comments made by its creator, Universal is still investing in new Potter attractions and lands. Each major new investment means ongoing negotiations with Warner Bros., which Universal must keep happy. Universal is now facing a similar relationship with Disney, thanks to the Mouse’s purchase of Marvel. However, that contract provides Universal with far more ability to keep the Marvel characters they currently use into perpetuity.

Image via NBCUniversal
The hotel for Epic Universe can be seen on the left side of the image and the entrance area for the Wizarding World themed land on the right side.
According to Stella, this desire to keep Warner Bros. onboard is part of the reasoning behind the addition of a Ministry of Magic-themed Wizarding World land in Universal’s now delayed Epic Universe theme park.

For Universal, the prospect of angering the group that holds the keys to the gold mine that is the Wizarding World means new investments will continue. Still, as friend slips toward foe, we may see even more attempts to quickly cash in on Butterbeer and Potter while they still have it.