Universal announces new massive 600 room hotel tower (and it has a rooftop bar!) 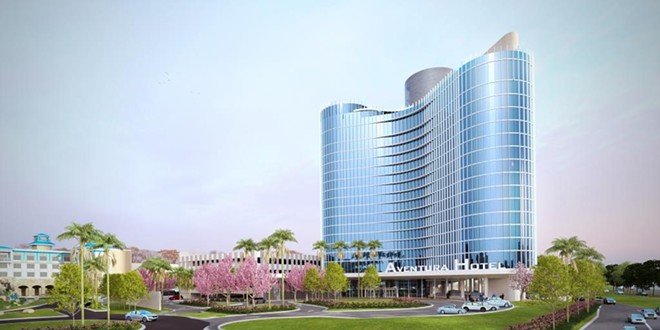 Announced roughly six months after its most recent hotel, Sapphire Falls, the new Aventura will be quite different than the five other resort hotels at Universal Orlando. Taking a much smaller footprint, the new resort makes up for it with a glass-clad sixteen-story hotel tower that would look more at home in Tomorrowland than across the street from the South Pacific-themed Volcano Bay water park.

While the hotel will have a sleek modern feel, Universal plans to have it closer to Cabana Bay's price point, on the value end, versus Disney's Contemporary, which falls on the higher end. While no prices have been confirmed yet, it's believed the new resort will fall between Sapphire Falls, which Universal classifies as a 'Moderate' resort, and Cabana Bay, which is (mostly) classified as a 'Value' resort.

Aventura does seem to be inspired, at least a small bit, from Disney World's Contemporary Resort. Just like at the Contemporary, Aventura will feature a rooftop grill and bar (16th floor at Aventura vs. 15th at the Contemporary) overlooking Sapphire Falls and the rest of the Universal Orlando Resort. Along with the rooftop bar and grill Aventura will also feature a food court with a mix of different food options, similar to the food court found at Cabana Bay.

Unlike the higher-end Universal guests staying at Aventura won't be offered complementary front-of-the-line Express passes but they will able to enter the parks two hours early. They will also have access to Universal's complimentary onsite transportation but to access the water taxis Aventura guests must walk next door to Sapphire Falls. It's not a long walk as Aventura is essentially connected to Sapphire Falls, it's located in the former retention pond that was filled in as part of Sapphire's construction.

Other amenities at the new tower hotel include a small pool area with a splash pad, fire pits and a large hot tub. An on-site fitness center will also be available for guests.

With 600 rooms, including 16 kid-friendly suites, the Aventura resort will be the smallest hotel on Universal's property. The Hard Rock Hotel, with 650 rooms, is the next smallest. Cabana Bay, the largest resort hotel at Universal Orlando, is getting even larger as two new towers with a combined 400 new suites. Altogether once Aventura opens in 2018 Univeral Orlando will have 6,200 hotel rooms on property.

Reservations for the Aventura Hotel should open in early 2017.