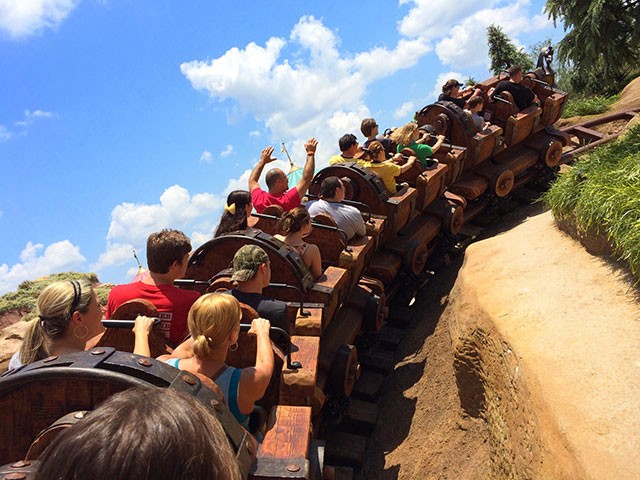 In covering Orlando’s theme park industry, I’ve occasionally been accused of being biased toward Universal and against Disney; with this month’s upcoming Wizarding World of Harry Potter/Diagon Alley coverage, I assume those complaints will only increase. So this week I come not to bury Mickey, but to praise him. Last week, two new attractions opened at Walt Disney World – one entertaining, if overhyped; the other exquisite, but under the radar – that proved the Mouse can still produce magic when it puts its mind (and money) to it.

The mega-news at the Magic Kingdom over Memorial Day weekend was the surprise soft opening of Seven Dwarfs Mine Train during the May 23 Rock Your Disney Side 24-hour party. I joined the sleep-deprived hordes aboard the long-awaited family-friendly roller coaster after 2 a.m., and returned May 28 for the official grand opening.

The elaborately landscaped mini-mountain that the new attraction wraps around and through has been under construction for four years, and it’s hard to imagine anything game-changing enough to live up to that buildup. The fact that its arrival came with the loss of Snow White’s Scary Adventures (my favorite Fantasyland dark ride after the late lamented Mr. Toad’s Wild Ride) and was accompanied by a hilariously awful music video featuring the Dwarfs in sunglasses did nothing to endear it to me.

But viewed objectively, the end product is a really enjoyable experience, especially for the kids and tweens toward whom the entire New Fantasyland expansion was aimed. In terms of thrills, the new mine train is a step up from the Barnstormer kiddie coaster, but less aggressive than Big Thunder Mountain or Space Mountain, and much smoother than either. The terrain-hugging track has no heart-stopping drops or elevating airtime to speak of, but the novel swaying seats slightly accentuate the curves (more so in the back car, especially if you and your seatmates shift your weight to get them swinging).

On the ride, between the two brief exterior coasting sections, trains pass through the Dwarfs’ magic gem mine, which is populated by perfectly animated animatronic characters, each with eerily articulate rear-projection facial features. As a bonus, there’s a post-ride drive-by of the cartoon cottage, inside which Snow White does a remarkably realistic dance while the witch cackles outside. At night, the oddly unlit track makes it feel faster than its modest 34 mph, but adrenaline junkies over the age of 12 will still be left jonesing for more. Be warned that only the last 40 minutes of the line is shaded, and you’ll be rushed past the interactive doodads toward the end. Your best bet is to book a FastPass+ in advance and whisk past the hour-plus line for the two-and-a-half-minute ride.

On the opposite end of the spectrum, the new Downtown Disney Starbucks opened May 30 and instantly became my favorite installation of the ubiquitous coffee chain. Like the meticulously designed Starbucks recently added to Universal’s CityWalk and Cabana Bay, the West Side store was designed by architect David Daniels, who works for Starbucks, but is based in Miami, not Seattle. The result redefines the strip-mall java joint you thought you knew, with reclaimed hardwood, a living lemongrass roof and a moss mural, and a fireplace with a view of the water.

Inside, the service area is staffed by double the typical number of baristas (with an accompanying increase in equipment) for optimal brewing expedience. The seating section features a wall-sized “virtual blackboard” that turns your image into a moving chalk sketch (like an inverse A-Ha video) or lets you wave mutely at patrons of the sister store in Anaheim. The only thing missing? More electrical outlets – perhaps to deter laptop loiterers.

What really sets this cafe apart are its Starbucks Reserve selections, which it shares locally with only the new Winter Park Village outlet. Limited quantities of upscale beans (with sources listed) are treated here like rare microbrews or small-batch bourbons. They are brewed in high-end Clover machines (think robotic French press) and served simply; this java is far too fine to mask in a macchiato. Those who feel Starbucks prices are already outrageous will surely balk at the extra buck or so per cup, but the Zambian peaberry brew from the Terranova Estate that I sampled was the rare cup I could really enjoy without sugar or cream.