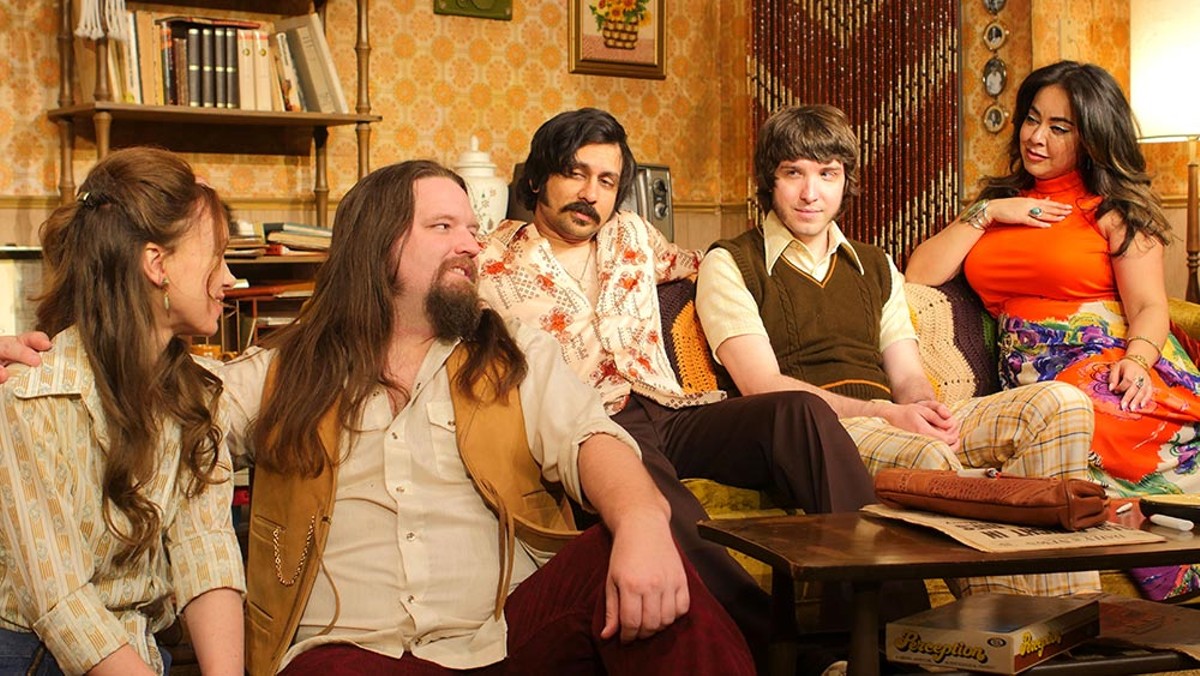 Audra Torres as Ginny, Christopher Ivers as Steve, Faheem Bacchus as Bobby, Joshua Fulmer as Jerry, and Natalie Bulajic as Catherine in "Say Goodnight, Gracie" photo by Marco DiGeorge, courtesy of Theater on the Edge

COVID-19 continues to flood across Central Florida, but even a recent tsunami of virus-related event cancellations hasn't halted this month's rebound of area arts and attractions. Amid an ever-growing wave of theme parks and theaters resuming full operations, two of my favorite local venues both reopened last week, and while they occupy opposite ends of the economic shoreline, they both returned sharing the same advice: Go with the flow.

After its months-long closure in 2020, Walt Disney World was quick to reopen its rides. But live entertainment took a lot longer to recover, with many major stages remaining dark for a year or more. On June 13, Disney's Animal Kingdom finally ushered guests back inside its spacious Theater in the Wild for the first time since the pandemic for the debut of Finding Nemo: The Big Blue ... and Beyond!, the newly reimagined version of the Pixar-inspired musical by Avenue Q's Kristen Anderson-Lopez & Robert Lopez, which originally debuted in 2007 as part of Disney's effort to bring Broadway-quality shows into its theme parks. Other shows from that era — such as the hour-long multiracial Frozen musical that ran at the Disneyland Resort — are mostly extinct, and when it was announced that the nearly 40-minute-long Finding Nemo show would return in a greatly shortened form, I feared the worst.

Fortunately, my opening-day viewing of the new production quickly allayed my fears, as the show's new Finding Dory-derived framing story allows the fan-favorite "tank gang" characters — led by the gravel-voiced Gil — to shine as they narrate the familiar fish tale. This new structure significantly tightens the show's pacing, and while some memorable gags were left by the wayside (I'll miss the dueling swordfish and flight-challenged penguins) all of the major musical numbers returned mostly intact, including "In the Big Blue World," "Fish Are Friends, Not Food" and Crush's signature Beach Boys-esque anthem, "Go With the Flow." Also returning, with some tweaks and updates, are the colorful costumes and Michael Curry-designed puppets. The giant Nigel animatronic is sadly absent, but new papercraft-style sets and vibrant video backdrops provide plenty of visual interest.

What was sacrificed in the new version of Finding Nemo (aside from four members of its cast) were any moments of darkness, danger or emotional depth, which previously elevated the musical above the typical theme-park production. The traumatic opening death of Nemo's mom, which informs his father Marlin's over-protectiveness, is excised entirely, as is Dory's near-fatal jellyfish encounter. The biggest loss is the climactic reprise of "We Swim Together," when the leads handed off their puppets and sung to the audience in a stunningly simple example of magical stagecraft. But although I'll miss those moments as an adult fan, I can't dismiss the countless families I witnessed bailing out of Finding Nemo mid-performance over the years. By packing all of the kid-friendly highlights — and none of the tear-provoking low points — into 25 minutes, Mickey may have finally found the secret to keeping Nemo's audience on board until the final bow.

A few days after my fishing expedition, Theater on the Edge — my favorite new independent company to come along in the last few years — opened its first post-pandemic-production, Ralph Pape's 1970s stoner comedy Say Goodnight, Gracie. Jerry (Joshua Fulmer), a high-strung struggling actor, is supposed to be attending his 10-year high-school reunion with his poet pal, Steve (Christopher Ivers) and secretary girlfriend, Ginny (Audra Torres), but an existential crisis has him stuck inside their seedy East Village apartment. Enter Bobby (Faheem Bacchus), their ever-baked best bud, and his polyamorous stewardess girlfriend, Catherine (Natalie Bulajic), bearing a bottomless bag of doobies. As the quintet gets sky-high, their circular conversation spirals from Norman Lear-nodding sitcom slapstick to a surprisingly touching and still relevant reflection on what happens when a generation raised by video screens is forced to abandon their Hollywood-fueled fantasies about their futures in the face of massive social upheaval.

Pape's play, which was developed during a Playwrights Horizon workshop in 1978, is a plotless period piece with zero dramatic stakes that depends on the charisma of its cast to carry audience interest through almost two intermission-less hours. Director-producer Marco DiGeorge populates his ensemble with several actors new to his company, starting with Fulmer, whose frustrated fulminating as the desperate thespian seems tailor-made for a three-camera shoot and live studio audience; however, Jerry might be a bit too intensely abrasive for a full-season pickup. I likewise had mixed feelings about his cohorts; although the characters repeatedly remark on how "silly" Steve is, Ivers' dry delivery is so deadpan that his jokes seem joyless; and Torres' emotional intensity and Southern accent are so powerful that Ginny seems to have stepped out a Tennessee Williams melodrama. Thankfully, Bacchus and Bulajic soon arrive to steal the show — he with Bobby's sleepy-eyed philosophizing (which exactly echoes Crush's mantra), and her with Catherine's overly intimate ebullience, which climaxes in a hilariously orgasmic monologue that's worth the ticket price alone.

As always at Theater on the Edge, the real star of the play is Samantha DiGeorge's production design, which immersively transports the audience back to 1976 in exacting detail, from the authentic aged wallpaper and pale-pink bathtub down to the era's undersized cereal boxes and oversized glass soda bottles. The only prop I'm not sold on is whatever the cast is smoking, which seems to be laced with something way heavier than any medical-grade indica I've ever inhaled. Based on the increasingly glacial pacing of the production's second half — which achieved an almost painful pause-to-dialogue ratio prior to complete couch-lock setting in — I'm fearful someone may have dosed the cast with fentanyl. Perhaps switching to an energetic sativa (I suggest a nice Durban Poison or Jack Herer) would help improve the cue pickup in what's otherwise a ripped-roaring good time.