This year, Play in a Day’s real significance centered on an emotional farewell 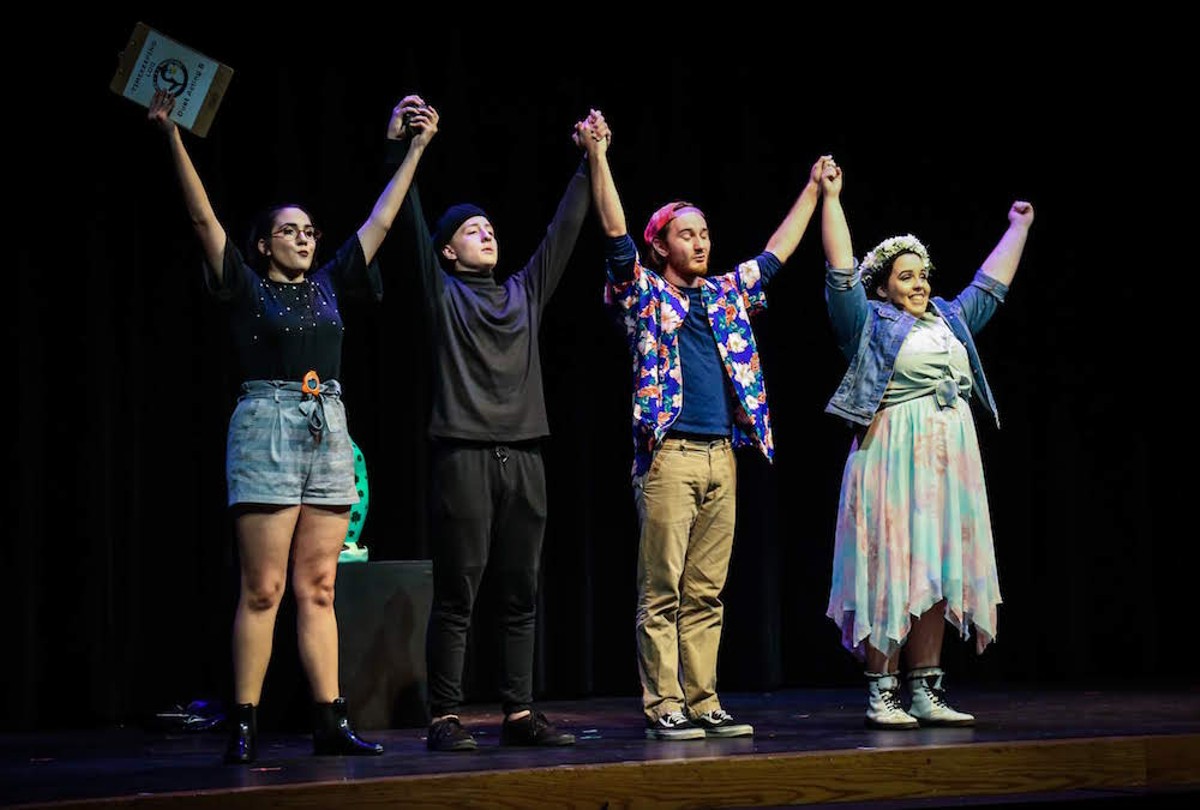 Play in a Day 2018 Photo by Robert Cunha

We all know that Rome wasn't built in a day, but it is possible to put together a show in under 24 hours, as the artists who participate in Orlando's annual Play in a Day event have been proving for nearly two decades. Last weekend, four dozen writers, directors and actors once again assembled at Lake Howell High School to accept the near-impossible mission of creating a 10-minute play – from blank page to public premiere – during a single night and day. While these one-night-only productions evaporated with the rising sun, this year's Play in a Day (which was rescheduled from last fall due to Hurricane Irma) included an emotional farewell that will resonate for far longer.

I've been attending and writing about Play in a Day since 2007, back when it was part of Orlando Shakes' Playfest. My mere decade in the audience pales compared to producer Beth Marshall, who has been organizing the event for 16 years. Over that time, PIAD has become a multigenerational affair that pairs professional performers with promising students, with proceeds funding the Beth Marshall Presents scholarships for teen thespians.

"All the artists in this event donate their time and talent and skills for nothing," Marshall explained between scenes. "It's a community-based event that gives people the opportunity they otherwise wouldn't have to work with each other." As a result, as the sequin-studded MC Pepe (Rob Ward) observed, "We've gotten to work with younger actors we may not have known, who have now become older actors who we can pay to do productions."

This year's PIAD theme was Decades, with seven participating playwrights assigned a different 10-year time span in which to set their script. I was proud to serve again as a judge, alongside Fringe super-patron David Horgan and recent Rollins graduate (and past BMP scholarship recipient) Kaitlyn Harrington. We awarded Best in Show to "1970s" by Rob Ward, which starred our Best Male Actor pick, BeeJay Aubertin-Clinton, as a fabulous big brother on a double date with his awkward sibling. Brenna Arden was named Best Female Actor for playing a Stepford housewife with an invisible son in Irene Pynn's "1950s," and author Andy Haynes' "1980s" picked up Best Writing and Best Tech for his tale set in an abandoned theater. Tara Kromer took Best Director for Samuel Butcher's absurdist "1960s."

While this year's participants – who also included Michael Wanzie, Kenny Howard, Christine Robison, Chris Yakubchik and dozens of other artists – once again impressed with their exhausting accomplishments, the evening's real significance revolved around someone who wasn't even onstage, though his presence was felt in every skit, both by name and in the form of an omnipresent prop penguin. After six years at Lake Howell, 2018 was the last PIAD that Beth Marshall will present there in partnership with James Brendlinger, who recently resigned after 21 years teaching theater at the high school.

"We're so grateful for the opportunity to have been here for the past six years," said Marshall. "I'm not certain that we will be in this space next year, but we will be having Play in a Day."

Brendlinger, who was arrested on April 6 for failure to report a sexual relationship he was told about between an adult volunteer and underage student, couldn't comment on his case while litigation is pending. But he received several standing ovations from the PIAD attendees, many of whom passed through his classroom, as he presented the speech he would have given at the school's annual awards night.

Obliquely acknowledging that he'd had a "rough spring," which also included the closure of Lake Howell's costume rental shop over school security concerns, Brendlinger focused on "hope, joy and love." He emphasized that he has "no regrets about the 21 years I spent here," adding, "Even though this portion is over, there's a continued joy in seeing the fruits of that. I think probably for the rest of my life I'll see students who are doing amazing things, and helping others do amazing things as well."

"Looking at a career change after 21 years for anybody, no matter what the reason, is scary," says Brendlinger. He doesn't have a drama degree, but took the post after coming here from Pennsylvania for a Disney job that he "hated after one day." While he says he didn't find Orlando to be "particularly welcoming" at that time, he's since forged deep connections in our arts community.

"I didn't realize until this happened [that] I have people that love me," Brendlinger said, concluding by quoting Clarence the Angel from It's a Wonderful Life: "'No man is a failure who has friends.' I feel like a failure, I can't help that and I'll get over it. ... I'll find another job, other art to create, find other ways to offer what I have to my community [and] move on to some positive stuff."

Wherever Brendlinger lands, his impact will linger on local stages, which are stocked with his alumni. And his and Marshall's mission of mixing students with seasoned artists will continue this month with BMP's New Works Playreading Series on June 23, featuring scripts by Lisa Villamil and Paris Crayton III, followed by the Top Teens Showcase and the launch of the Billy Manes Art Activism scholarship on June 30. Both events are at Class Act Studios; visit bethmarshallpresents.com for details.