There’s something extra special between the romantic leads of 'Aladdin,' currently at the Dr. Phillips Center

Since its animated debut in 1992, Aladdin has become one of Disney's most prolific properties, spawning theme-park attractions, cruise-ship shows and just last year a live-action remake. But although the songs and storyline should be familiar to most audience members attending the touring Broadway production playing the Dr. Phillips Center (now through Feb. 9), they may detect a unique chemistry between the show's romantic leads. That's because this Aladdin and Jasmine actually met long before they climbed aboard a flying carpet in Agrabah, back when they were both children in an equally enchanted oasis called Hawaii.

Kaena Kekoa, who plays Princess Jasmine on the national tour of Disney's Aladdin, and Jonah Ho'okano, who plays the title character, both grew up on Oahu and attended the same church-based community theater program, performing together as tweens in Aida and Fiddler on the Roof. But as I learned interviewing the duo ahead of their arrival in Orlando, while they both began and ended up in the same place, they took very different paths to get there.

The daughter of a pastor and school principal, Kekoa grew up in a big family that was "always singing and dancing," and began performing in middle school.

"I'm really, really shy, but doing theater back there really got me out of my comfort zone," she says.

Despite her early love of the stage, she went to college to be a teacher. "I wanted to pursue musical theater, but I never thought I was good enough," she says. Kekoa had no intention to pursue a stage career until friends and family encouraged her to attend an open audition for Aladdin, which would become her first-ever professional acting role. "I didn't decide to go until the day before the audition, and it was really just them pushing me to do it, because I would never have on my own." 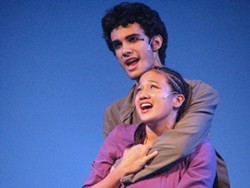 Kekoa's co-star, on the other hand, knew he wanted to be an actor at age 10, when his mother enrolled him in theater camp during school break "that I fought her tooth and nail about, and then immediately fell in love with," Ho'okano recalls. "She didn't realize what a theater monster she was creating, because I never stopped after that." At age 18, he was cast in the Aladdin show at Disney California Adventure and moved from Hawaii to Los Angeles for five years. He then took up the role on the Disney Fantasy cruise ship, before finally joining the Broadway tour. While he's reticent to compare the different interpretations, he calls his role at the Disneyland Resort "the best gig that a performer can snag in L.A. for a theatrical day job." Ho'okano also says that life on tour is similar to working on a cruise ship, except now he has his own Airbnb to stay in, whereas on the boat, "there wasn't an escape ... you go back to your cabin where you are living next door to all of your other cast members, and there's no real downtime or alone time."

One thing both performers agree on is that their shared history contributes to the ease of their characters' onstage relationship. "Aladdin and Jasmine are in a romantic relationship, but they're very playful," says Kekoa. "Being on there with Jonah makes it a lot more comfortable, because we've known each other and done shows together." Ho'okano, who had to stretch his natural talents in order to sing in a higher key and master Casey Nicholaw's choreography, calls performing alongside Kekoa "the easiest part of the puzzle," adding that "the minute me and Kaena had a scene together, it was the most natural thing in the world."

"People come for the Genie and the carpet, and when they actually get there, they get so much more," says Kekoa, who portrays Jasmine as a strong, independent woman for "the young girls who I see at the stage door and in the audience in their cute little Jasmine dresses."

As for that famous carpet, Ho'okano claims this production's flying floor covering contains "a little extra magic" compared to the two he'd previously flown on. Just don't ask him how it works: "I couldn't honestly tell you. I kind of get on it, I trust it." And no matter how many times he and Kekoa climb aboard to sing "A Whole New World," Jonah insists he "will never get tired of taking that flight ... I will never not be excited to start that number, I will never get sick of performing that song. It holds a very special place in my heart."