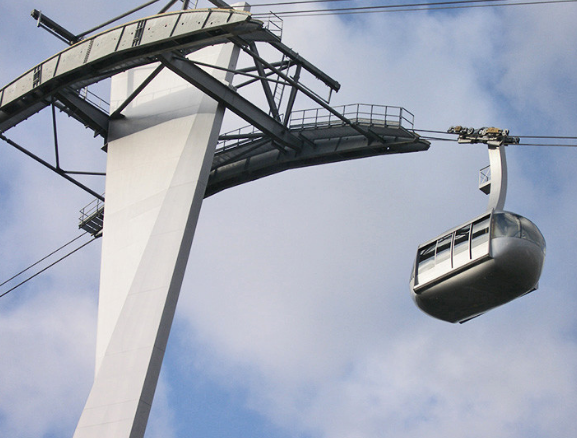 Portland Aerial Tram | Image via Doppelmayr
With Star Wars Land expecting to draw huge crowds back to Disney’s Hollywood Studios, the already strained mass transit system at Walt Disney World will need some upgrades. Now it looks like Disney is about to break ground on the biggest expansion of its mass transit system since the early '80s when the monorail expanded with the Epcot route.

On a forum thread on the Disney fan  WDWMagic, user danlb_2000 posted images from recent permits from the South Florida Water Management district that show what looks like an urban-style elevated gondola system. Based on the location of buildings in the permits, the system seems to be a point-to-point five-stage system. The system begins at Epcot’s International Gateway, and will then stretch past the Boardwalk Resort before linking to Caribbean Beach Resort near where the rumored DVC tower will go, then reach toward the Pop Century Resort before heading to Hollywood Studios.

Disney has yet to confirm anything regarding the possible gondola system, but since the rumor broke late last week, numerous Disney insiders have given details on what we can likely expect. A possible manufacturer for the system is Doppelmayr, the same group behind the Hogwarts Express funicular railway at Universal Orlando. They’re also the manufacturer of the long-rumored transit system that would link Universal’s numerous properties in the tourist district.

The Disney gondola system would possibly be Doppelmayr’s 3S system using enclosed gondolas that can hold up to 30 guests at a time with an hourly capacity between 4,000 and 5,000. Some industry experts believe the WDW system could hold up 200 cabins. A larger building in a Caribbean Beach expansion plot near Pop Century looks to be a maintenance and storage building with a gravel access road coming in off the Pop Century entrance. There’s still plenty of discussion on how many stations there will be and what height the system will be, but it’s clear that the system will be high enough not to affect the current road network.

This isn’t the first time gondolas have been proposed as a transit system in Central Florida. Back in 2010, a similar system was suggested as an east-west transit option for Orlando. That system had routes above Highway 50 and numerous area toll roads. After the initial proposal, that plan has gone quiet.

While Disney hasn’t confirmed the gondola transit system or any DVC expansion at the Caribbean Beach Resort they have confirmed a new waterfront dining and retail area in the Centertown marketplace at the resort. This, along with the improved dining and retail at Disney’s Boardwalk, should help entice guests to use the gondola system after a day at Epcot or Hollywood Studios.

Based on timelines in the water management district permits, if they mean what rumors suggest they mean, Disney should break ground this year and open the new gondola system in 2019, just in time for the new Star Wars land at Hollywood Studios.