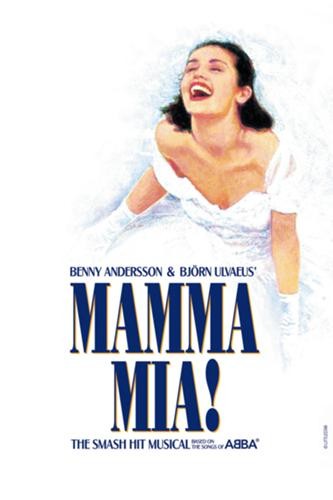 I've seen more than my share of jukebox musicals, both overrated (Movin' Out) and underrated (Good Vibrations), but until this week I'd never experienced the show that popularized today's trend of marrying a vintage musical act's greatest hits to a loose storyline. Mamma Mia!, the "smash hit musical based on the songs of ABBA" (as the posters proclaim) is approaching 5,000 Broadway performances, and has spawned a half-dozen companies currently criss-crossing the world from Helsinki to Seoul. As a child of the 80's, my familiarity with Benny Andersson and Bjorn Ulvaeus' disco discography is limited to Muzak-induced AM radio flashbacks. But even though I'm outside Mamma Mia!'s target demographic, surely I wouldn't dare to imply that the 54 million theatergoers who have spent over $2 billion on tickets to see it have misspent their "Money, Money, Money"?

There are a handful of clever quips, usually from Donna's AbFab-esque BFFs Tanya (Gabrielle Mirabella) and Rosie (Carly Sakolove), but the plot's key crises could all be solved with six lines of honest dialogue instead of another barely-relevant song. At the end, you'll be left with plenty of unanswered questions: Who is Sophie's real dad? Why does this take place on a Greek island? And where are all the Greeks?

But, if you're like me, you won't care much, because Phyllida Lloyd's direction seems more concerned with cartoonishly broad gestures and grimaces aimed at the back balcony than anything anything involving actual human emotions. Staging is either stultifyingly static, with non-singing characters frequently freezing in place for multiple stanzas, or involves endless entry-level choreography. Colavolpe and Sakolove at least seem conscious of what a mess they are mired in and make the most of it, but much of the production isn't creatively self-aware enough to even qualify as camp.

Sound on opening night was unusually awful even for the acoustically impaired Bob Carr, with a muddy wall of "Main Street Electrical Parade" synthesizers smothering the tinny vocals and making the actors sound a millions miles away from the fifth row. And while production designer Mark Thompson's efficient two-unit set suffices, his mishmash of multi-period street clothes and garish ABBA-inspired get-ups don't make any sense in the context of the story, and are consistently unflattering to boot.

From the eardrum-puncturing overture to the interminable post-bow "megamix" reprises (another trend you can blame this show for), that same disconnect is evident throughout the exhaustingly enthusiastic production. If the characters actually were the headbanging rebels they claim, they would never have been caught dead listening to ABBA. And neither will I, as soon as I can get that earworm title track excised from my skull. Until then, at least I have an enhanced appreciation for Priscilla Queen of the Desert, and a brand-new badness benchmank below Chitty Chitty Bang Bang and Kathleen Marshall's Grease revival.