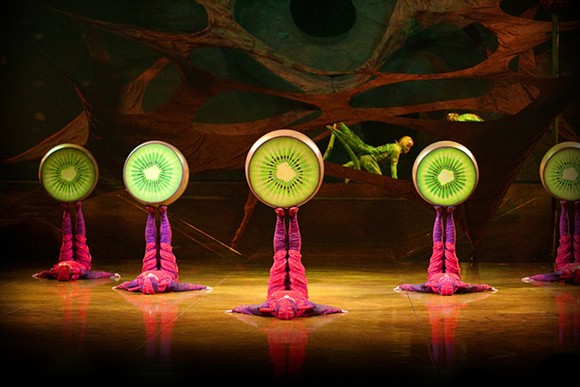 Photo by Cirque du Soleil
Cirque du Soleil is justly celebrated around the world for its imaginative animal-free entertainments, but once you’ve seen nearly all of their sit-down shows – including the long-running La Nouba at Disney Springs – it may seem hard to justify attending one of their touring productions, especially after the disappointing Dralion played UCF’s arena in 2011. But despite being on the road since 2009, I found Cirque’s road company of OVO (performing at the Amway Center through Sunday) as fresh and fun as many of their permanent productions.

While most Cirque storylines (aside from the overcomplicated KA) are abstract in the extreme, OVO provides more of a plot thread than many by setting the action in the insect kingdom, where different species of bug have bonded into a community. Several of the circus acts are similar to ones you’ve seen in other shows, but the buggy theme lends them a uniquely adorable aesthetic. There are Chinese waifs juggling objects with their feet, as always, but this time they are tossing kiwi slices and corn cobs. A tissue-silk acrobat becomes a butterfly emerging from its cocoon; Russian Cradle aerialists (think trapeze without the trapeze) soar as shiny scarab beetles; a stunning slack-line routine is reinvented as a spider swinging in his web. Even the finale, which features trampolines and wall-running not unlike La Nouba’s climax, is enhanced by the capering crickets' insectile movement quality.

OVO includes more humor than some Cirque shows (even some slapstick violence and sexual suggestiveness) by integrating the clown characters into the narrative instead of simply using them as a transitional sideshow. The music, performed as always by an exceptional live band and vocalist, starts with a samba style and layers in elements of French accordion, country-western, and even Beethoven. Even the set, which uses a large-scale projected backdrop, is simultaneously more monumental than most touring setups, and also surprisingly intimate considering the arena’s size.

I have a few quibbles with OVO, beginning with the obtrusive intermission that Cirque’s touring shows insist on retaining, despite their sit-down productions being performed straight through. More frustrating, the promising plot thread established in Act 1, when a foreign fly (Francois-Guillaume Leblanc) arrives with a precious egg and begins to woo a Rubenesque ladybug (Michelle Matlock) ends up going nowhere. Good storytelling dictates that the show should end as the egg hatches, perhaps with the insect couple becoming parents to its occupant. Instead, the egg stays intact, violating Chekhov’s maxim about loaded guns onstage, and the show concludes with the actors removing their costumes to take a bow, destroying the theatrical illusion to a degree I’ve never experienced at Cirque.

Caveats aside, I enjoyed OVO more than almost any touring Cirque show I’ve seen, and recommend it to both loyal fans of the troupe and newbies who want to sample Soleil’s style without spending quite as much on seats. Alternatively, La Nouba is offering fall discounts for kids, hospitality workers and Florida residents, so either way you can’t go far wrong.