Someone misplaced the UCF-UConn 'rivalry' trophy and now it's missing 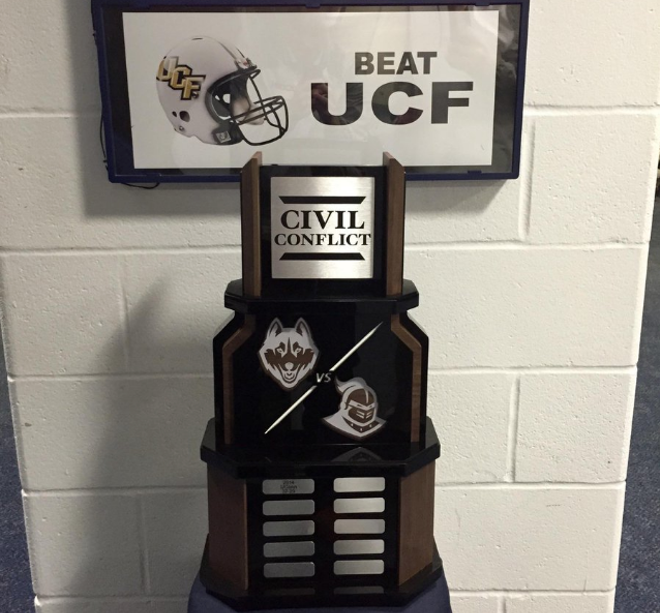 Photo via UConnFootball/Twitter
TheCivil ConFLiCT trophy, made to juice up the mostly-imaginary rivalry between the UCF Knights and the University of Connecticut Huskies, is nowhere to be found.

Jeff Jacobs of the Hartford Courant dialed phones far and wide to find the infamous award, but alas, not a single person seems to know where the thing went.

"My understanding is the trophy was designed and paid for by Bob [Diaco]," said UConn athletic director David Benedict, in Jacobs' interview. "I haven't seen it since he left."

How about Randy Edsall, current coach for the Huskies? Nope. Or the University of Nebraska, Diaco's most recent stomping grounds? "I don't have any information for you on this," said Keith Mann, Nebraska communication director.

UCF's very own coach Scott Frost, when asked about the trophy at a recent ACC conference call, was also unaware of its location. "We have no idea. In fact, we've wondered where it is."

The ConFLiCT's unenthusiastic reception isn't going to help its chances of being found. Called the worst rivalry in sports history by The New York Post, most folks seem to just not see the point, including coach Frost.

"We told them before the game last year we weren't going to take the trophy if we won," said Frost. "It found its way to the sideline for some reason. The pictures on social media of it on the sideline were the last I'd seen of it."

As for Diaco himself, he'd rather not know. "I've eliminated it from my mind. I put the experience in a chest, locked it, dumped it into the ocean and I threw away the key. That's the important thing. I've thrown the key away. I don't even know 'it" or what you're talking about. Because I've eliminated that whole painful part from my mind."