Photo via Disney
As numerous announcements for the future of Disney’s American parks were being made across multiple events over the past week, the most extensive report yet on the various Disney Parks projects in the works worldwide was published in a New York Times article.

Estimating that Disney will be spending $24 billion, the article goes into details on Disney’s big play for its successful theme park division.

Pointing to Disney’s goal of adding significant capacity to multiple parks, the article gives new details on numerous projects stretching across all six of Disney’s global resorts. It also confirms various details for attractions including the roughly four dozen animatronics that will be found on the new Star Wars: Rise of the Resistance coming to Disneyland in Anaheim and Hollywood Studios in Orlando. Hong Kong, Shanghai, and even the “inevitable” seventh resort are all discussed in the piece, but the detail is making the most news happens to one that Disney has since confirmed to be false.

Accompanying the article was a set of five maps showing the parks with the largest projects in the works. Disney Studios Park in Paris shows the multiple lands themed to Frozen, Star Wars, and Marvel that were previously announced. Hong Kong Disneyland’s map shows recent additions, like the Moana stage show, and upcoming ones, like the Frozen . California Adventure includes the recently opened Pixar Pier and gives new details on the forthcoming Marvel land. 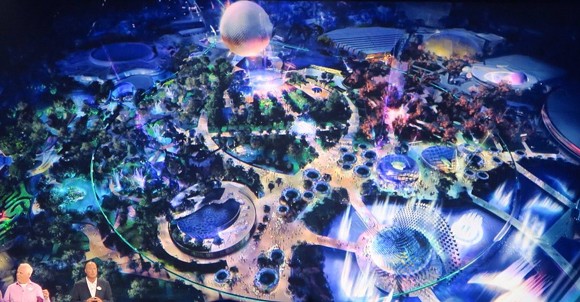 Image via Scott Gustin | Twitter
An artist rendering of Disney's plans for Epcot's Future World shared at D23
Unlike the other maps, the one for Epcot includes previously announced projects like the Disney Skyliner, the space restaurant, and the two new rides but it also contains a large circle over the area where Innoventions, MouseGears, and the Starbucks are currently located noting that its slated for a “Future Showcase (overhauled).” These buildings in this area were completely missing from early concept art for the reimagined Epcot that was shown at last year’s D23 Expo. Disney hasn’t shared any details on what they plan to do with Future World, but rumors point to a top to bottom overhaul that will see updates to nearly every pavilion.

Even more surprising than the confirmed updates to Future World was the map for Hollywood Studios. Alongside mentions of the recently opened Toy Story Land, the soon to open Mickey Mouse ride, and the upcoming Star Wars land was Rock ‘n’ Roller Coaster highlighted with the caption “Re-themed roller coaster (overhauled).”

The indoor roller coaster, currently featuring Aerosmith, has been rumored to be getting a major overhaul for years. Early speculation included Guardians of the Galaxy and RadioDisney. More recently both Monsters, Inc. and The Incredibles have been strong contenders. It’s thought this area will be the next to receive a substantial overhaul after Star Wars land opens on the other side of the park. Current rumors point to this new update as also fixing the cul-de-sac bottleneck that regularly Sunset Boulevard, where the attraction is located.

Not long after the article went , the New York Times issued a correction and an updated map. The correction reads, “An earlier version of a map with this article misstated the Walt Disney Company’s plans for the Rock ‘n’ Roller Coaster at its Hollywood Studios park. The company has no current plans to upgrade the ride.” Disney also confirmed to various other media outlets that it was not currently planning an update to the attraction.

One possibility for the confusion is that the reporter may have mixed up the Rock ‘n’ Roller Coaster attractions in Paris, where a replacement has been announced, and the one in Orlando. Another easy-to-accept scenario is Disney was planning on the updates, going so far as sharing them with the reporter, but has since canceled those plans. Even with these two believable scenarios, some think there's another possibility.

Despite the correction and Disney stating multiple no such plans are in the works, a replacement for the aging attraction may still be in the pipeline. It is possible that since most of the article is only focused on the next five years and the current rumored timeline for the Rock ‘n’ Roller Coaster update falls just outside of that time span Disney is choosing to hold off on any announcements regarding the attraction.

Last year industry insider Jim Hill mentioned Monsters, Inc. as the possible theme for the update then this year, after the runaway success of The Incredibles rumors began popping up reporting the theme had instead shifted to that property. There are also small rumblings linking the ride’s redo to two upcoming reboots of long forgotten film franchise The Rocketeer, which would place the attraction into the same rough time period as other nearby attractions including the Tower of Terror.

With so much riding on the next five years, some of the projects outside of that timeline have been rumored to be put on the backburner for the time being, including projects at both Hollywood Studios and Epcot, but with Hollywood Studios, with its five current rides, in such dire shape the park will be in need of major updates beyond the three new attractions already announced for the park. It’s no secret that Aerosmith’s draw is fading and with the ride seeing some of the shortest lines in the park, an update to Rock ‘n’ Roller Coaster would be an obvious one for Disney, even if their official statements say otherwise.