The Magic Kingdom may finally update its nighttime shows 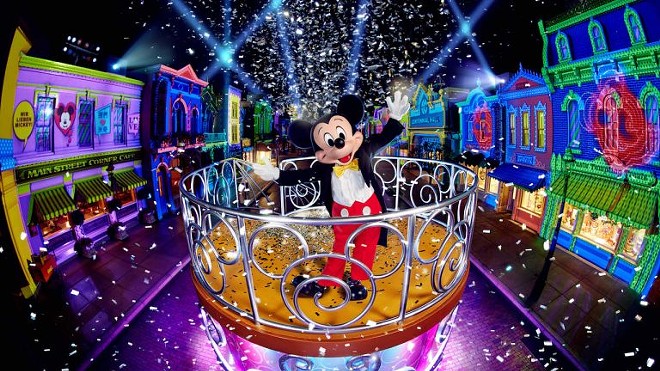 Image via Disney
The “We Love Mickey!” Projection Show at Hong Kong Disneyland
As area theme parks recover from the ongoing pandemic, things are slowly returning to normal. Walt Disney World, for their part, is hoping to come back with even more on offer.  The park's nighttime entertainment is returning at the beginning of July, but Magic Kingdom may see some brand-new nighttime offerings this fall.

Disney has already shared many details regarding the special entertainment that will occur as part of the resort’s 50th anniversary later this year. At each of the four parks, buildings will be transformed into what Disney is calling "beacons of light." Epcot’s Spaceship Earth is already receiving a brand-new lighting package, while the other three parks will see new projection mapping on their park icons.

Image via Instagram/ Zach Riddley
Imagineers installing and testing the first of Spaceship Earth's new light beacons.
While we know what to expect on Cinderella Castle thanks to concept art released by Disney, rumors point to big changes along the street leading to the castle. According to numerous fan sites that track rumors, the projection mapping show on the castle will be augmented by similar projection mapping along Main Street USA. In the concept art for Cinderella Castle, the viewpoint is from the hub area, meaning Main Street is not visible.

The projection mapping along Main Street is thought to be a part of a whole new nighttime spectacular and not just the Beacons of Light mini-shows that are expected to run at various times throughout the evening, similar to how the Nighttime Awakenings projection shows took place at Animal Kingdom.

Image via Disney
Concept art for Animal Kingdom's Beacons of Light nighttime show
The new show has been rumored since at least 2019, but more recently, as the resort prepares to roll out its anniversary celebration offerings, details regarding the new show have been shared by numerous insiders and fan sites known for their reliable reporting on such matters. Earlier this month, projectors for the still unannounced show began being installed in windows along the street.

Similar projection mapping along Main Street debuted at Disneyland in California six years ago and Hong Kong Disneyland in 2018. A year later there were rumors of both a Florida and Paris version of the show. The existing projection mapping shows along Main Streets include both regular and holiday versions that are frequently updated. Meanwhile, nighttime shows at WDW can last decades with few changes.

Image via Disney
Disneyland Forever nighttime spectacular at Disneyland in California.
The shows in Hong Kong and Anaheim feature themed projections along the buildings, enveloping the street in the show. This is in contrast to Orlando, where nighttime shows rely nearly exclusively on the castle and fireworks around it. The newer shows switch the primary focus from the hub areas in front of the castles to the full length of Main Street.

In the past two decades, Disney has perfected projection mapping. It can now be found in numerous attractions and as part of nearly every nighttime show at its parks. Some parks, such as Anaheim and Shanghai, have seen success with projection mapping when fireworks may not be able to be used. That doesn’t seem to the reasoning behind their use at Disney World.  Recent after-hours testing of Epcot’s new "Harmonious" nighttime lagoon show confirms that show will include heavy amounts of fireworks.

In Disneyland, other buildings around the park are also included in the shows allowing for even more crowd dispersal. With its beacons of light on Spaceship Earth and new entrance plaza lighting along with the lagoon show, Epcot will see nighttime offerings at least two locations.

In a post-pandemic era, crowd dispersal may become even more important. That may explain why these items were greenlit while other plans, such as ride enhancements on numerous Magic Kingdom attractions, have been supposedly postponed indefinitely.