KING KONG She made 94 movies in all, but Fay Wray will always be remembered as the terrified plaything of the most dangerous primate the world has ever known (with the possible exception of that guy who used to sing lead for the Spin Doctors). Mark the recent passing of seminal scream queen Wray with a free outdoor screening of her 1933 classic, King Kong, thrilling once again to the sight of her eternally youthful form ascending the Empire State Building as the sole passenger of the Monkey's Paw Express. An introduction by locally based, nationally published film critic (and blogger par excellence) Charles Martin will reveal more tidbits concerning this timeless tale of cross-species attraction. (8 p.m. in Central Park, Winter Park; www.enzian.org; free)

THE LATE BP HELIUM We must say that we're a touch, um, weary when it comes to Of Montreal, Elf Power and the entire now-fragmented Elephant 6 scene. What was once an inspired storm of psychedelic creativity has bumbled its way into being a navel-gazing coven of semi-fey dorkiness. Bassist Bryan Poole – who played with both Of Montreal and Elf Power – is but one of many cross-band collectivists to emerge from E6's Athens nucleus, but when it comes to his own project, The Late BP Helium – we must say that we're almost ready to take back all the horrible things we said about our ruined expectations. Reverting to the wide-eyed pop mysticism that made early E6 endeavors so interesting, Poole/BP Helium is willing to try anything on his records. Though drenched in sugary pop, Poole summons up a multitude of sonic ideas and, most importantly, is unafraid to rock when necessary. (with Of Montreal, Sugar Oaks; 9 p.m. at Will's Pub, 407-898-5070; $8) 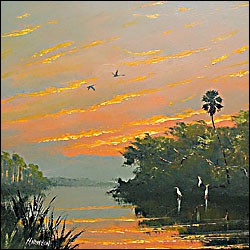 THE HIGHWAYMEN "The book is a phenom, like the Highwaymen themselves," reports Gary Monroe. Even though the DeLand-based documentary photographer/author did research and write The Highwaymen: Florida's African-American Landscape Painters, published in 2001, he's not overhyping the continuing interest. Monroe's book is heading into its fifth printing, and "people are discovering the Highwaymen every day still, and loving what they are learning," he says. What they learn is that back in the 1950s, an enterprising group of young black artists from the Fort Pierce area painted and peddled some 100,000 of their idyllic Florida landscapes – distinguished by waving palm trees and splendorous sunsets, rivers and lakes – from the trunks of their cars along the highways. While there was a time when the paintings could be found at garage sales and flea markets for peanuts, they are now high-dollar collectibles. No wonder Secretary of State Glenda Hood made sure the Highwaymen were recently inducted into the Florida Artists Hall of Fame. And no wonder Monroe, a professor of visual art at Daytona Beach Community College, made sure there was a party to celebrate. The best part of this story is that many of the Highwaymen are still living and will be in attendance for the commemoration, which will include lectures and plenty of opportunities to have a copy of the book signed – by the artists and the writer – for your own memorabilia collection. (1 p.m.-5 p.m. at Daytona Beach Community College, Building 110, 386-506-3195; free)

ORLANDO PHILHARMONIC ORCHESTRA Opening their 2004-2005 "Focus Series" (each program zeroes in on a particular composer) with a performance of Felix Mendelssohn's Fourth Symphony and a handful of his sinfonias, it looks like the Orlando Phil has found yet another way to repackage standard works. The OPO claims that this series will be "a new approach to beloved classics" that "highlights the best of the chamber orchestra repertoire." The "new approach?" An in-the-round presentation. That's it. A new seating arrangement. We've said it before and we'll say it again: We love the OPO and we think they're all marvelous musicians with an excellent understanding of the material. But somebody in the main office needs to be slapped, because the OPO doesn't need to sugarcoat every single performance as a "new approach" or "opera without words" or some sort of "classical music for dummies" thing. All this does is diminish the power of the music and further alienate those who might be intimidated. Sure, have a performance at Leu Gardens; sure, have a cute little pops program every now and then; but jeez, don't waste the prodigious talents at your disposal on recycling much-recycled works. It bores those of us who care and feels silly to those who don't. (7 p.m. at the Margeson Theater of the Lowndes Shakespeare Center; 407-896-6700; $25, $32)

HOT WATER MUSIC Gainesville's Hot Water Music has been through 10 years of near-anonymity, a breakup and a handful of musical changes, but they're still torchbearers for today's pop-punk scene. Having transitioned from its hardcore roots toward more accessible sounds, HWM has (for the most part) managed to retain the following it built as a DIY, under-the-radar act. The hype of their debut, Fuel for the Hate Game, was not indicative of the fact that the band had only pressed a couple thousand units. In 1997, HWM fell on hard times and decided to call it quits, only to regroup shortly after. Its recent offering, The New What Next, presents earfuls of melody without painting itself into the emo corner, and catchy hooks without catering to the teenybopper punk crowd. Gone is the throaty grit of the Chuck Ragan/Chris Wollard vocal combo, but as the band continues to prove, screams don't capture attention – good songwriting does. (acoustic in-store performance, midnight at Park Avenue CDs, Winter Park, 407-629-5293; free; also Wednesday, Sept. 22, with Don't Look Down, Strikeforce Diablo; 8 p.m at The Social, 407-246-1419; $12) 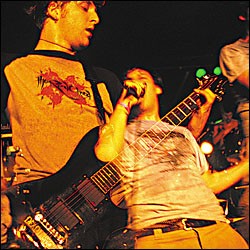 LICKGOLDENSKY/COLISEUM/ BREATHER RESIST Holy crap! This is a shit-hot day for record-store gigs (see Hot Water Music, above) and this is a shit-hot triple bill. We all know that Altamonte Springs is a hotbed of noisy spazz-punk (it is, right?) and this show – which features the ultra-awesome Lickgoldensky (from Philadelphia) and the fraternal Louisville bands Breather Resist and Coliseum (BR's guitarist Evan Patterson is the brother of Coliseum's Ryan Patterson) – is gonna bring out all six of the kids to whom these bands are rightfully gods. That means that all the rest of us are just gonna have to trudge up I-4 and represent. (7 p.m. at O-Zone CDs, 407-862-1002; $7)

THE BILLY NAYER SHOW Last April, New York's The Billy Nayer Show was booked into Will's Pub for what was sure to be a memory-making evening of alterna-rock brilliance – and was heralded as such in a 700-word article in this very newspaper. But the day that story hit the stands, word came down that the band's entire Southern tour was off. With a make-up date finally announced some five months later, the lessons to be learned are twofold: (1) Always save your back issues of Orlando Weekly; and (2) delayed gratification can sometimes be a good thing. What would have been a simple concert in April is now a multimedia blowout that includes a screening of the group's amazing feature film, The American Astronaut (unseen in Orlando since its 2001 screening at the Florida Film Festival). Of course, the focus of the evening will still be the unique reinterpretations of American musical forms that BNS frontman/songwriter Cory McAbee emits as easily as breathing. And with a new CD, Rabbit, released Sept 15, his band has even more material to draw from as this anticipated gig finally becomes a reality. (9 p.m. at Will's Pub, 407-898-5070; $6, $8)