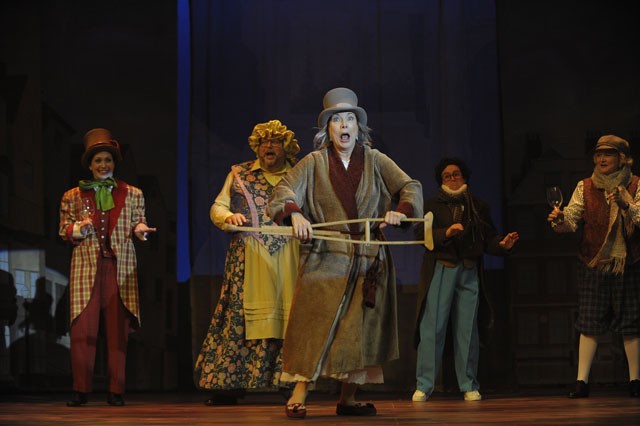 Boil me in figgy pudding, drive a stake of holly through my heart, make me watch Jim Carrey's Grinch; devise any torture you like for me, but please don't make me see another heartwarming staging of A Christmas Carol. I've seen every one-man, three-man and 27-man tribute to this perennial chestnut between Broadway and Orlando, and if I have one more tear jerked by Tiny Tim, I'm suing the crippled brat for whiplash.

Apparently I'm not the only one exhausted by the unending earnestness. In fact, authors David McGillivray and Walter Zerlin Jr. appear to despise Dickens even more than I do, since they've placed poor Charlie's classic in the clutches of the Farndale Avenue Housing Estate Townswomen's Guild Dramatic Society, a community theater group composed of well-intentioned (but not, well, talented) English housewives who've been massacring dramatic classics from Macbeth to The Mikado since 1976. This holiday, the FTHETGDS is screwing up Scrooge.

Farndale's cast is headlined by Thelma (Anne Hering), the reigning diva who stars as a soft-shoeing Scrooge in this semi-musical bastardization of the familiar story. Felicity (Kelly Kilgore) is overeager (if not overly intelligent) as both nephew Fred and his mother Fan, among others. Mercedes (Suzanne O'Donnell) wears a neck brace, but does her hobbling best as Bob Cratchit, and put-upon stage manager Gordon (Paul Romero) is pressed into service as her wife. Finally, Mrs. Reece (Karen K. Wright) hosts and handles narrations, though she could use a class in microphone etiquette. With this crew in command, you can be assured every opportunity to forget a line or fumble a cue will be embraced to irreverent effect.

I'm a lifelong fan of British comedies about middle-class twits, from Fawlty Towers to Are You Being Served?, and I can think of nothing funnier than an old-fashioned panto butchering Dickens' most sacred of Christmas cows. But something must have been lost when this longtime European hit crossed the pond, because it gave me more grins than guffaws. After a slow intro, the gonzo opening song (featuring Santa, a flailing snowman and zero Dickens) made me hopeful that the whole show would be that absurd. Sadly, the remainder sticks to a straightforward, if exaggeratedly incompetent, retelling. A snappy riff on Marley's "Ask me who I was" speech approaches "Who's on first?" genius, but more often the pacing feels sluggish and clunky (and not in a funny way). The characters' quirks and conflicts, which should be more interesting than the Dickens rehash, never come to the fore, so the setup doesn't achieve its chaotic comic potential.

Maybe these performers are too skillful, their pratfalls too accomplished, to evoke genuinely awful theater. Director Matt Pfeiffer seems to have rehearsed the spontaneity right out of his talented cast, though all look gorgeously garish on Bob Phillips' set in Mel Barger's '80s outfits. Add in an unnecessary intermission and a seemingly endless audience-participation segment, and you can practically hear the energy hissing out of the room. While, in all fairness, most in the audience around me appeared to enjoy themselves, by the bows I was too bored to give half a humbug.