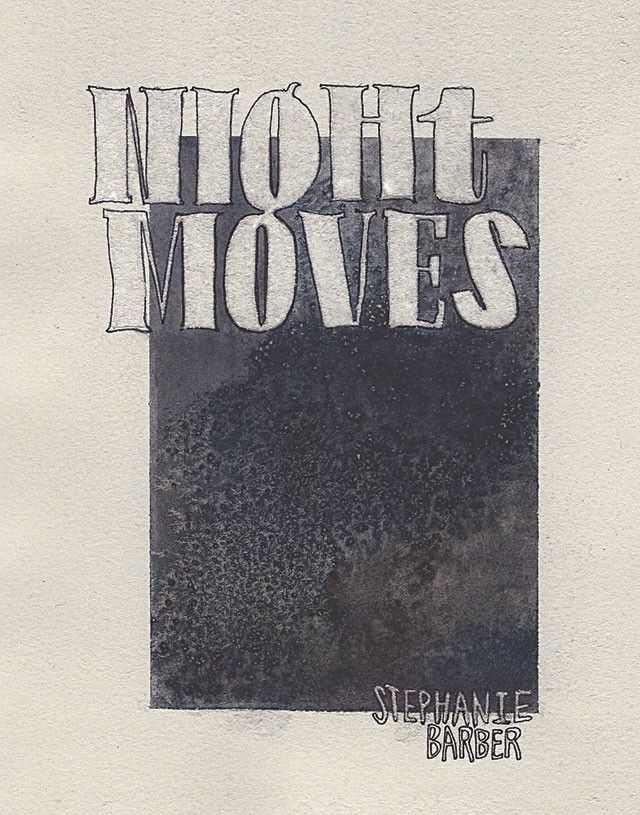 For Night Moves, Barber – a filmmaker and performance artist with a sublime knack for examining the creative process with the sort of wonder and determination that a first-year med student brings to a cadaver – performed a meticulous act of cutting and pasting. The text comes from comments that appear on the YouTube page for "Night Moves," the 1976 single from Bob Seger and the Silver Bullet Band. And, yes, we're talking the "Trying to lose the awkward teenage blues/ Workin' on our night moves" staple of classic-rock radio. Fleetwood Mac's Rumours probably served as the soundtrack to more first times, but "Night Moves" is the song that makes people think about that moment. And Night Moves is entirely sourced from what people wanted to say about this song.

Just don't let the ready-made approach lead you to brush the book off as a gimmick: It's a fascinating plunge into a fractured, melodramatic soup of American memory. Such bittersweet reminiscences get stomped on by the sort of immature spleen that populates comments pages. One-word to sentence-long fragments run into short paragraphs invested with embarrassingly candid feelings. Notions of accurate spelling are specious at best. The phrase "Comment removed, author withheld" recurs at arrhythmic intervals, becoming a metafictional jab at the book itself. And somehow it works better than it has any right to. So, while we're still waiting for an infinite number of monkeys to type Hamlet, millions of wired simians type "Briggflatts" every day.

That isn't meant to cheapen the writing of Basil Bunting or literary modernism one bit. Language is communication, and order complements meaning. Writing swims against entropy's current, casting one author's efforts to mimic disjointed polyphony as a mammoth crawl. With Night Moves, Barber recognizes that online commenting has become a kind of abstruse naturalism, acts of solitary typing that accrue a scarily familiar humanity en masse.