Thanks to a newly designed cruise ship, Florida may soon be a major player in river cruises

Image via American Cruise Lines
The hybrid catamaran cruise ships soon to be used by American Cruise Lines
Last year while many cruise lines were still months from any hope of reopening, U.S.-based cruises were able to restart. And new developments in the the cruise industry show that river boats' pandemic popularity might not be a fluke.

Viking, known for their European river cruises, will enter the U.S. market this summer when it begins sailing the Mississippi. Their entry into the market corresponds with an impressive reimagining by one of the industry's lesser-known lines, which only cruises in the U.S.

American Cruise Lines has been cruising U.S. waterways for more than thirty years and has added eight new cruise ships and riverboats within the past five years. The fleet, now the largest in the country, now includes five small cruise ships, six modern riverboats, and four paddle wheelers, which are being updated to better meet the demands of today’s increasingly discerning cruisers.

The Connecticut-based cruise line has announced the next major step in the evolution in river cruising with the unveiling of Project Blue. Using a hybrid catamaran design, the new fleet allows for easier access to shallow American waterways.

“Project Blue started as a design challenge to create a boat small enough for New England harbors and stable enough for the Alaska Inside Passage, with a draft shallow enough for the Atlantic Intracoastal Waterway,” explained American Cruise Lines President & CEO Charles B. Robertson in a prepared statement. “These boats can run almost anywhere, and because there will be 12 of them, they will be deployed all over the United States.”

With a dozen new vessels and a total of 672 staterooms, American will nearly double its fleet (which currently features five small cruise ships and ten riverboats) while increasing the capacity for domestic coastal cruises more than two-fold. The new fleet have modern interiors designed by Miami-based design firm Studio DADO, the same firm behind some of the most popular spaces on Carnival and Norwegian ships. Highlights of the design include a forward lounge that offers 270-degree views, two onboard dining venues, multiple sitting areas, and 56 spacious staterooms across a range of sizes. 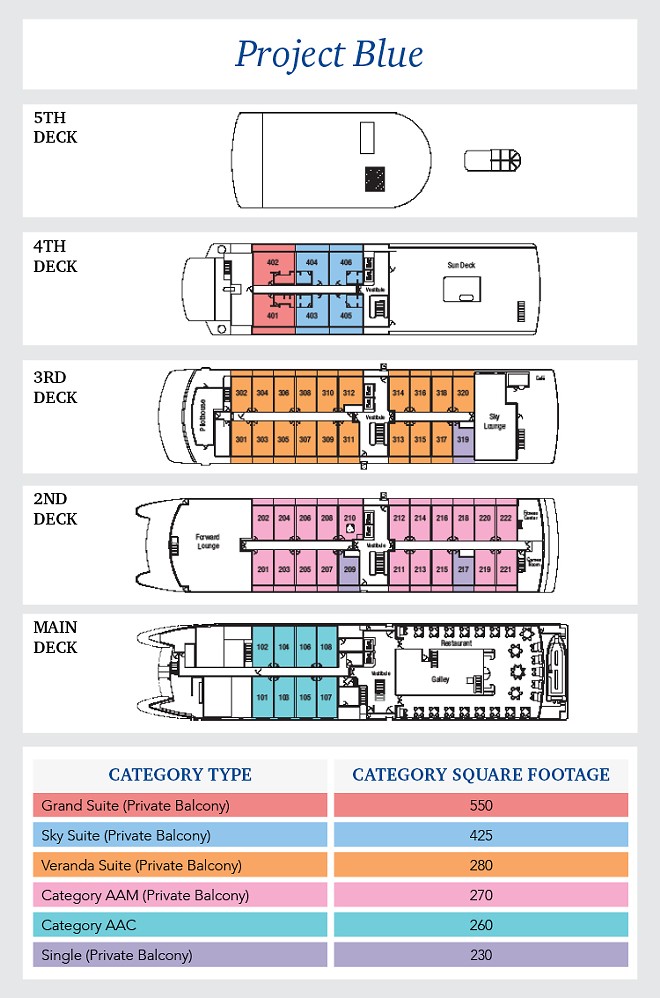 Image via American Cruise Lines
The first two ships, the American Eagle and the American Glory (named after the company’s first two small U.S.-built ships) are scheduled for delivery in 2023. In speaking with Travel Weekly, Robertson pointed to Florida as one of the possible areas where the new ships will be utilized, noting they can “get further south down the waterway in Florida.” American already has some cruises that feature Florida’s intercostal and northern segments of the north-flowing St. Johns River. American could use the new vessels for cruising further up the St. Johns River, allowing cruisers to explore local communities, including Downtown Sanford and Hontoon Island State Park. Sailings along the intercoastal could also bring more attention to some of the smaller communities found on Central Florida's Atlantic coast. Image via American Cruise Lines
A dining area on one of the American Cruise Lines upcoming catamaran ships
The higher cost of having to follow U.S. labor regulations has meant many people still view river cruises as an unattainable luxury. Still, new competition and interest in the market may soon change that. In early 2021, while many cruise lines were still months away from new sailings, American restarted with a cruise along the southern coastline with ports of call in Florida, Georgia, and South Carolina. The cruise brought additional attention to the cruise line, which was able to reopen faster thanks to the all-U.S.-based cast and crew. After strong interest in its cruises, American rolled its longest river cruise yet. A 22-day sailing that gives passengers a full tour of the Mississippi.

At the time, Robertson again mentioned Florida, with him stating the company was looking for ways to allow guests to “connect seamlessly between our existing cruises.”

After two years of little international travel, American is betting many people have realized the beauty within their own backyards and will want a cruise experience exploring that beauty with none of the guilt associated with the low-pay, internationally flagged mega-ships that currently define the cruise industry.