Tamp out the old, inhale the new

If 2003 will be remembered for anything, short of the requisite intellectual apocalypse inspired by beefcake leadership, it will be its flippant celebrity scandals played out incessantly to the dull hum of the crowd. Seemingly on hyperbolic overdrive, the American consciousness -- now veritably ruined by "reality" television and the surreality that implies -- has gone above and beyond its creative distaste and is now aimed directly at the superstar jugular. In short, nobody is safe.

While scandal is nothing new the world over, it does bear some notice this Yuletide, if only for its mythic evolution. From the point of O.J.'s white-truck race, it's been a bad case of toxic shock and public trial for those choosing to be in the public thigh -- which all makes for good fun, if not simply good drinking games. (Two shots if you saw the Paris tape!) But when it gets to the point that The Smoking Gun website now has its own television show, and Matt Lauer is interviewing Hollywood image consultants about just how to confront the hisses of the masses (as if that's to matter to your standard "Today" show demographic of housewives with Manilow leanings), we ought to take stock in what's going on, laugh a little bit, then take more stock.

Scandal is not a word that should be thrown around too lightly. Sure, the deafening retch of the news media as it squeezes, red-faced, the last drops out of every slow news day is slightly scandalous in and of itself, but these sorts of indicators are far too general. Most valid scandals involve one or more of the following things: a person of phenomenal riches who the world would like to pummel; a substantial amount of those riches mired in illegality; extreme sex, or to a lesser extent, awkward relationship drama. The good stuff.

So we make things up. The clearest example, Paris Hilton, is both a wet dream and bad dream, and exhibits absolutely no side effects of guilt or blame. No ramifications to speak of with that one. Capitalism should be this fun. Just keep our minds occupied, will you?

In the spirit of those morbid holiday polls nobody talks about openly -- the ones predicting the untimely and/or mathematically linked deaths of celebrities in the coming year -- it only seems fair to attempt a prediction at the careers that will take a mortal fall in 2004. Well, not fair, really. But fun. Here, then, a parade of predictions for next year's celebrity scandal sheet; a wish list, if you will, for resolutions turning into revolutions and pretty people falling from the sky.

Oprah, hot on the heels of the odd African toy disbursal, as magnified by Diane Sawyer's prime-time sap-and-lean, is discovered to be, well, too rich. In fact, the little rag dolls she's gifted the poverty-stricken area are a sick kind of regift, having been manufactured in hidden sweat shops throughout the poverty-stricken continent and given to the Oprah show in hopes of, well, some cash. Oprah is thrown into a public bout with depression, gains 200 pounds (again) and calls up Rush Limbaugh for a quick score. Everybody catches on, and E! gets a second channel.

Charmed by the success of its whorish first season and scared by the Dana Plato-like death of second fiddle Nicole Richie, FOX goes deep into the country to find a corn-fed girl to take the place of Richie on the New York and L.A. "celebutante" scenes. Hilarity ensues when the aforementioned hillbilly comes to blows with Paris Hilton over one of Shannen Doherty's other ex-boyfriends, films a sex tape on Beta and becomes the next spokesperson for Wesson oil.

FOX media rat Bill O'Reilly is revealed to have never had an idea of his own. Worse yet, the people find out that all of his shouted recriminations are the product of a nervous disorder, a vertigo affliction of sorts. The camera pans back to reveal that this whole time the set has been spinning. O'Reilly is immediately discredited and sentenced to embedded service as John to Geraldo's Ponch, and has torturous trouble maintaining his sense of balance. 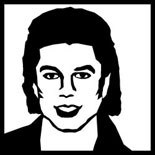 Jermaine Jackson has an affinity for young people, too! Tootie!

Howard Dean loses the presidency by one percentage point but is surprisingly put in office anyway, after some guys named Chad in California decide that their votes didn't count. Arnie shoots himself, Bush is mortified to the point of homosexuality and Dean makes life seem worthwhile again.

Turns out that all of your 1985 predictions were true. Duran Duran is indeed God, and soooo much better than Wham! and a-ha. Kicking off the year with a new song featured on the "Queer Eye for the Straight Guy" soundtrack (true), the band reclaim their "fab five" title from the titular queens, and go on to crush the entire music industry into a tellingly narcotic dust -- not unlike that which decorates Simon Cowell's idle shoulders or Britney Spears' pinched nose. Simon LeBon replaces Bono as global goodwill ambassador, succeeds Prince Charles on the merit that Diana liked him better and goes on to father an entire generation of cryptically poetic gadabouts. Life becomes entirely more interesting.

7. The Flu Shot Is a Joke Scandal

Upon further investigation, the Department of Health concludes that maybe injecting people with the disease they're fighting -- even in the face of the "building tolerance" medical debate -- is actually a bad thing. A national ban produces an underground recreational abundance of the vaccine, and sneezing becomes this year's delirium tremors. Dude, can I get a hit? Bless you.

Heavyweight Vandross Ruben Studdard finally reveals the lowest of common denominators by releasing a single called "Sorry 2004." Nobody realizes the prophecy, until -- following his sales-pushed admission of homosexuality -- Clay Aiken begins to fear for his own physical being. The top of the charts and the tabloids begin to read the same (in fact, Billboard and Star Magazine desperately merge under the tainted duress of Bonnie Fuller), and Aiken is eventually digested by Studdard with a side of cheese fries. A nation mourns, sort of. Debbie Boone, however, is happy when her pivotal anthem, "You Light Up My Life," bounds back into public consciousness. We always loved that song.

Jen and Ben finally settle their carat differences and are happy to announce that they will marry only under the multimillion-dollar interests of a reality show. Only, on the final episode, FOX brings in Matt Damon, the real hunk, and Average Ben is forced to feud with his one and only friend (in addition to nursing his habit of converting lesbians to his Afflec-tion). Arm wrestling ensues, and Jen hops a limo into a tunnel where the paparazzi "accidentally" slam into her. Ben finally admits his Afflection for Matt, and the two marry in Rhode Island.

Realizing the linchpin provided by disgruntled, oversexed teens in its West Coast county of Orange, FOX commissions an East Coast version for this very town. It only lasts three episodes, though, as nobody goes out or beats each other up anymore. Lou Pearlman guests and swallows Orange Avenue whole for a final ratings blitz. The blitz fails. Orlando, scandalously, dies.