Sunday in the Park With George 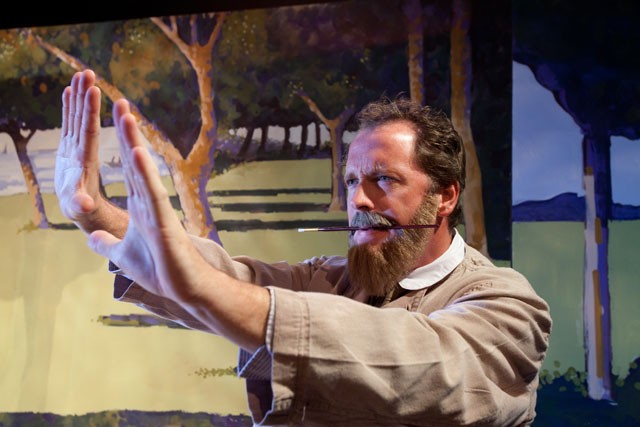 In "Putting It Together," the signature song from Stephen Sondheim's Sunday in the Park With George, an artist elaborates on the agonizing politicking that must be endured to afford creative expression. This deliciously dense patter piece makes a perfect theme song for the premiere of Mad Cow Theatre's long-gestating new venue, which debuted last Saturday. Orlando's Cows have come home, and they finally have a pasture worthy of their work.

A decade ago, I sat around a small wooden stage on the second floor of the historic Rogers Building (above what later became the Gallery at Avalon Island), watching plays produced by a scrappy young theater company with a strange name. Soon after, the troupe founded by Rus Blackwell, Trudy Bruner, Alan Bruun and Dennis Neal moved across Pine Street to an awkwardly arranged complex adjoining a sports bar. Despite the sightline-impaired seating and occasional fryer-oil overflows from the neighbors, I experienced (and participated in) some exceptional theater in those rooms.

For much of that time, Mad Cow executive director Mitzi Maxwell was quietly working toward a bigger, better barn for the "herd." After seemingly endless negotiations with city agencies and developers, Mad Cow secured a heavily subsidized 20-year lease in the 54 W. Church St. development. Nearly two years ago, Maxwell first showed me around the skeletal remains of a shuttered Hooters restaurant, pointing out on blueprints where the state-the-art amenities would eventually be installed. Today, thanks in large part to a gift from Harriett Lake (who also lends her name to the larger of the two new stages), those architectural plans have come to vivid life in a visually striking space that feels both cutting-edge and comfortably intimate.

If finding the new theater is somewhat sticky, the city's strict signage ordinances are partially responsible for your confusion; Maxwell says it took a year to get approval for their old location's minimalist marquee. Assuming you overcome that challenge, you'll quickly notice how the Cows have moved on up to the west side (of Orange Avenue): Instead of a sunken lobby looking out on a darkened side street, the new entryway boasts a wide-screen view above 55 West's pedestrian plaza. With an upgraded wine-and-beer bar and a beautiful multimedia display of Tom Hurst's show photography, you may find the lobby so inviting you miss your curtain. Most important, the new bathrooms (named the "Levittloo" after patrons Mara and Harvey Levitt) are modern, spacious and not hidden down a backstage hallway. The only flaw I found is a substantial support pillar smack in the middle of the Harriett's fourth row; don't sit center in the rear rows unless you have X-ray vision.

It's fitting that Mad Cow inaugurated their new home ambitiously, by taking on Sondheim's intricate ode to the artistic impulse. Sunday in the Park With George opens in 1884, when French post-Impressionist Georges Seurat (Matt Horohoe) was painting his pointillist masterpiece, "A Sunday Afternoon on the Island of La Grande Jatte." James Lapine, who wrote the nonmusical parts of the play, imagined a historical fantasy inspired by the canvas, inventing relationships between the artist and his enigmatic subjects. Obsessed by his efforts to capture light in flecks of pigment, Seurat ignores his childlike model-mistress Dot (Hannah Laird), is estranged from his elderly mother (Meghan Moroney) and seeks succor from his frenemy Jules (David Almeida). Seurat's mantra of "order, balance and harmony" doesn't help him connect with other people; he'd rather crawl on all fours with a dog than make eye contact, even when Dot announces she's leaving for America with their illegitimate infant.

After intermission we spring forward a century, where Georges' great-grandson George (Horohoe again) is an '80s avant-garde electronic artist stuck in a laser-light rut. George suffers the same gossiping groupies as his ancestor, only now they have teased hair and shoulder pads instead of parasols and bustles. No matter what century it is, the artist's quandary remains the same: how to embrace change while staying true to his vision, without becoming lost in nostalgia for a past that never was.

Those are abstract issues for a musical to address, and though adored by Sondheim cultists, Sunday isn't among his most easily accessible works. Its minimalist plot lacks Sweeney Todd's narrative propulsion, and though the score is rhythmically dazzling and lyrically dizzying, it's also maddening; almost none of it is hummable, save for the snatches that evolved into the song "Children Will Listen" in Lapine and Sondheim's next collaboration, Into the Woods.

Thankfully, any difficulties in the material are overcome by Mad Cow's polished cast – particularly Horohoe and Laird – whom director Tim Williams masterfully manipulates like puzzle pieces in front of Cindy White's sliding panel set (gorgeously painted by Lisa Buck). As order coalesced from chaos in the first-act finale and a living facsimile of the famous painting formed before me, I knew Mad Cow had found the ideal image befitting their hopeful new beginning.

Sunday in the Park With George