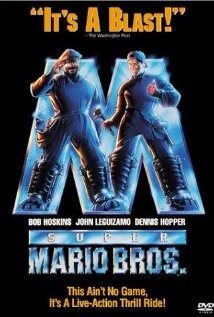 Between a lack of interesting non-Cloud Atlas yellow face stories and the giant megastorm lumbering its way slowly over the entire Eastern United states, the roundup is somewhat slight this week. Because of that, I'll take this time to really encourage you guys to watch the three short films I've posted below. If you only watch one, watch The Distance of the Moon, which is a really wonderful, introspective short love story, and was a heavy inspiration for Enrico Casarosa's incredible short La Luna which Pixar ran before Brave earlier this year. News, links, etc: -Behind the scenes of the harrowing production that was Super Mario Bros. the Movie. (Cinema Blend)
click to enlarge

-A look at the disparity between journalism in the movies and journalism in real life. (NY Times) -The history of PDI, which we know better now as Dreamworks Animation. (FX Guide) -William Faulkner's estate is suing Sony for copyright infringement for a quote ("the past isn't dead, it's not even the past") using in Midnight in Paris. To quote Walter Sobchak, what are you, a bunch of fucking crybabies? (THR) -It's great that John Hawks is really starting to catch on. I hope he keeps the momentum up and doesn't turn to a career of shit like most other high profile Oscar nominees (he will be). (NY Times) -So you want a job at Pixar, huh? (CreativeBloq) -The New Yorker's Richard Brody reports on Bachelorette's German title: "Our Fattest Friend's Wedding". My new title for Germany is "Place of Small Dicks". (@tnyfrontrow) -How smartphones are killing traditional photography. I hate to agree with anything Ashton Kutcher does, but his new Nikon S800c commercial (gotta scroll down and click) is actually great. (C|Net)
click to enlarge

-On Wreck-It-Ralph's design. (NY Times) Short Films: -Naran Ja, an experimental dance short directed by Alejandro Gonzalez Iñárritu and choreographed by Natalie Portman's baby daddy, Benjamin Millepied. (12:31) (Playlist) -Sub! by Jesse Schmal. (8:40) (Cartoon Brew) -The Distance of the Moon, an Israeli short film based on the short of the same name by Italo Calvino, directed by Shulamit Serafy. (8:37) (io9) Trailers, posters, etc: -The Loneliest Planet, which I've posted before but which is out now on VOD. (Apple)
click to enlarge

-Catch my Disease, about Ben Lee's strange trip through life as a rock star, dating Claire Danes and being a precocious little c-word. Man, did I love Noise Addict's first EP and album, not so much the solo stuff. The Bens were all right. (Apple) -The Bones Brigade, a doc about farming subsidies. No, wait, a doc about the Bones Brigade skate team, featuring a very young Tony Hawk. (Apple)