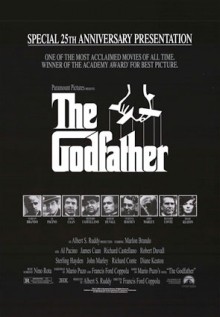 I've been thinking a lot about film traditions lately. Maybe because of all of this talk about film being dead, maybe not. Maybe because I'd misheard and thought AMC would be showing Gone with the Wind all day on Thanksgiving instead of The Godfather and The Godfather II. I had a momentary spot of seething rage at the thought, because, honestly (frankly?), I can't stand Gone with the Wind. Yes, it's a great film. No, I don't begrudge anyone their enjoyment of it. But for me, it's associated with reading John Steinbeck's The Pearl in fifth grade. I might have liked it if I'd read it at another time, but I've never had such a long slog through reading something as I did that section of the English text book. Except being forced to watch Gone with the Wind at an age before I had any cinematic appreciation. It's just not my movie.

But The Godfather certainly is, and the I and II marathon has been part of my Thanksgiving tradition for years, since even before I remember AMC playing it, back on the old full screen double VHS sets. I own the DVD set, but for whatever reason, my tradition is about leaving the TV on AMC all day long while I cook instead of just popping the discs in. Its the reason I haven't upgraded to the Bluray set. They're films that I've seen so many times that I can only watch them once a year now, so it's odd that I choose to watch them edited for content and time, with commercial breaks.

There really are no great thanksgiving films, which is something I'll talk more about in Underrated later in the week. It's such a boring, stuffy holiday, one that can only truly be appreciated as a kid because you get days off of school. True, we get days off of work (or at least time and half) as adults, but graduating from the kid's table turned out to not exactly be worth it. Now the only thing on my mind is juggling a time schedule of when the turkey goes in and for how long, and when should I start peeling the potatoes, and how many, and why the hell don't I make cornbread and sausage stuffing more than once a year? And I will watch the rise and fall of the Corleone family while doing all of this for the same reason I'm peeling the potatoes: a slavish adherence to tradition.

My God. You must all feel like you just read The Pearl now. I apologize. It was a boring week.

-Orlando Sentinel film critic Roger Moore was part of the layoffs from the paper on Friday, leaving him both shaken and stirred. I kid, I kid. (Poynter)

-Something tells me that Justin wouldn't let me get away with this, but a critic can dream, can't he? (Criterion Corner/Film Comment)

-Asa Butterfield, the young star of Scorsese's Hugo, may end up playing Ender Wiggin in the adaptation of Orson Scott Card's Ender's Game. I haven't seen Hugo yet, so I don't have an opinion on the casting, but the idea that Ender's Game is finally gathering some momentum is a bit of a scary thing. More than Ender, though, I think Bean will be the key casting choice. Anyway, Gavin Hood better lean it more towards Tsotsi than Wolverine for this one. (Deadline)

-The LA County Sherrif's office is re-opening the case of the death of actress Natalie Wood, who was found floating in the Pacific Ocean in 1981 after a fight with her husband, Robert Wagner. (CNN)

-According to the ship's captain, it was Robert Wagner's fault. Thanks for the timely reporting, Cappy. (NY Times)

-The Hollywood Reporter's annual director's roundtable, with Michael Hazanavicius (The Artist), Steve McQueen (Shame), Bennett Miller (Moneyball), Mike Mills (Beginners), Alexander Payne (The Descendants) and Jason Reitman (Young Adult). Read at your own peril. You won't magically end up liking any of these guys through this format. (THR)

-Here is a fun interview with Jason Segel about the Muppets, the reality of felt and Superman capes. (Vulture)

-You do kind of forget how very young Chloe Moretz is until you see her say "OHMYGOSH" in an interview. (Vulture)

-So, at least we know there will be some quality lip biting in the live action adaptation of Akira now. Seriously, I dare WB to make this a less appealing film. How about casting Andy Dick as Akira? Dana Carvey as Church Lady to be the religious nut on the loud speaker? Louie Anderson as #27 (the kid who looks like Louie Anderson)? Do it! I dare you. (Deadline)

-In case you have a little bit of empty space somewhere in the back of your head, here are 100 things that you didn't know about The Lord of the Rings trilogy. (Empire Online)

-Here's a Q&A with Roger Ebert. (My DVD Insider)

-What's LucasFilm up to anyway? (/Film)

Trailers and what have you:

-Pixar's next film, a fairy tale, Brave. It might just be the Scottish accents, but it smacks a little bit of How to Train Your Dragon. I'm positive it's better though. Positive. (Apple)

-The second trailer for Steve McQueen's Shame is dynamite, but openly comparing it to The Last Tango in Paris is maybe not so wise no matter how good it is. (Apple)

-Tarsem Singh's Mirror Mirror trailer, which you've probably seen since everyone has felt the need to compare it to last week's Snow White and the Huntsman trailer. (YouTube)

-The Vow. Rachel McAdams gets hit by a car. Again. (IMDb)

-Avengers posters/banners. Not a fan of the design personally. The rather shit quality of these pre-Avenger movies isn't filling me with a lot of faith for the movie itself either. Sorry, Joss. (Comics Alliance)

-Apropos of nothing, here's Norton showing Ralph the Hucklebuck. (YouTube)