I woke up this morning all excited that tonight was the night that Lindsay Lohan made her big comeback in Liz and Dick, but it turns out I'm a week early. It's not the movie itself I'm excited about, of course. It's that once the thing has aired all of the awful ads will finally go away, especially the ones in the movie theater that I can't avoid.

It's gotten awful reviews and that's not unsurprising (the thing is on Lifetime after all), but she does look somewhat startlingly like Liz Taylor in the promos, and it's somewhat uncomfortable to be forced to equate the two in my head. It was a problem that didn't exist when Jennifer Love Hewitt played Audrey Hepburn because there is barely a passing resemblance there. Maybe Liz was just easier to dress up as.

It's all almost over.

-From his own mouth (or fingertips, as it were): Brad Bird is not directing the new Star Wars. (@BradBirdA113)

-Amazon posted their Black Friday deal schedule. There is an awful lot of shit in there, but there are a few gems too. (Amazon) 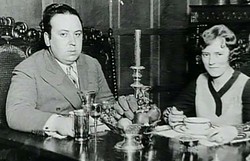 -With all of these films about Hitchcock bubbling to the top, it's his wife, the very shy Alma Reville, finally getting her day. I just finished reading It's Only a Movie by Charlotte Chandler a few weeks ago and the movies don't seem to show the half of it. (NY Times)

-Anthony Bourdain explains his anger at The Travel Channel for making it look like he endorses Caddies. (Tumblr)

-"Robert De Niro on the Art of the Long Career"? You mean being in denial that your career is still worth anything? (NY Times)

-How real was the hacking in Skyfall? Not that real, but also not that fake. Surely more real than in Hackers, where they were hacking with Mac laptops. (i09)

-Cinemark is unveiling a smartphone app that can tell if you've checked your phone during a movie and if you've been a good little boy or girl and kept that shit on vibrate in your pocket, will reward you with coupons. I can't tell if this is a bad idea that I'm blind to because of my stabby rage for in-theater texters or if this is actually a good idea. (Deadline)

-A feature on Marion Cotilliard before Rust and Bone comes out. (NY Times)

-There is a "famous actor" going around adding spurious facts to his famous friends' IMDb pages. (THR)

-Janusz Kaminski on how he achieved 11 of his most striking shots. (Vulture)

-Regina Spektor was in Orlando recently and has a wand to prove it. (AV Club)

-The illusionist heist movie Now You See Me, with Jessie Eisenberg, Isla Fisher, Mark Ruffalo, Woody Harrelson and Morgan Freeman. This is on the edge of either awfulness or awesomeness. (First Showing) 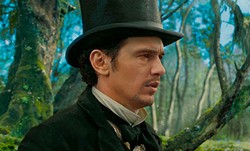 -Not to nitpick, but is James Franco giving a Braveheart speech as Oz here? What the hell do you people see in Sam Raimi's movies anyway? (Apple)

-Poster and banner for Wong Kar Wai's The Grandmaster, with Little Tony Leung, which will probably never actually come out. (First Showing)