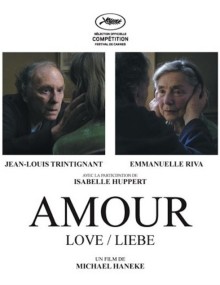 Cristina Flutur & Cosmina Stratan in "Beyond the Hills"

A little bit of a late start this morning, as I wait for the Palme d'Or to be announced. Cannes has become a weird entity lately, as Twitter and blogging have become so prevalent. You feel like you were there, experiencing it, hearing the gossip and the stories about the rain and the green grocers.

The gossip this morning seems to be about Nanni Moretti's suspect taste in film and about how his strong personality could sway the Jury towards something unpopular. There are plenty of rumors about which actors and directors have been called back to Cannes for tonight's ceremony -- Haneke, Mungiu, Cotillard have been called back supposedly, and rumors are now saying that Carlos Reygadas, who is personally in the top 10 of filmmakers I can't stand, has won the Palme d'Or for Post Tenebras Lux, which was roundly and loudly booed after its screening, though rumors that Haneke's Love has won also abound.

I've never followed the festival this deeply before. Last year's festival sort of came to you because of all of the controversy and the stacked line up that everyone was clamoring to talk about. This year there really was none of that. The biggest talking point seemed to be the use of Katy Perry's Firework in Rust and Bone, Nicole Kidman peeing on Zac Efron in The Paperboy and Kristin Stewart's nude double hand job in On the Road.

You become exhausted following the news hourly and and glad to see the end of it, but also know you'll miss it. Through other people, their opinions, complaining, and sleep deprived tweeting, you come to feel like those experiences are yours. Sasha Stone's Cannes diary at Awards Daily was a particularly great read (as no doubt you know because you all clicked on the link last week).

It's all so very strange these days.

Best Actor to Mads Mikkelsen for The Hunt.  Best Actress is a tie for Cristina Flutur & Cosmina Stratan in Beyond the Hills.  Best Director to Carlos Reygados for Post Tenebras Lux.

And finally, Michael Haneke takes home the much coveted Palme d'Or for Amour.

-It's time to wave goodbye to Cannes for 2012. Remember it in picture form since that's as close as most of us got to being there. (CNN)

-In addition to the main competition, here were the other winners at Cannes: Beasts of the Southern Wild (FIPRESCI), After Lucia (Un Certain Regard), The Road To (Cinefondation) and The Hunt (Ecumenical). (Cannes Official)

-Sundance Selects picked up Abbas Kiarostami's Like Someone in Love, which I can't wait to see. (Deadline)

-And Indomina picked up the US rights to Leos Carax's apparently crazy Holy Motors. Another one I can't wait to see. (Deadline)

-Absolutely stunning shot of a fisheye digicam mounted to the top of the Alexa SteadiCam as they did a pass on the last shot of Hugo. (Photobucket)

-It seems moviegoing is in this season, as 2012 looks to be one of the highest grossing box office years ever. Much of that is padded by  IMAX and 3D prices though, and not as much by actual asses in seats. It's still bothersome that it's mostly because of tentpole films though. It's the mid-level film, the ones that cost $30m-$50m, that need a real comeback though.  (HuffPo)

-"The Sexual Remaking of Kristin Stewart at Cannes." Now that's how you write a headline. Yeah, yeah, she shows her boobs and has a lot of sex in the movie, but the best bit of info in the piece is this: "Stewart makes eye contact instead of dropping it, and the lip-biting tics that the actress brought to Bella are all banished." (Vulture)

-The good Stewart related headlines keep rolling in: "Kristin Stewart Unfairly Chastised for Jerking Off Two Guys at Once". (Jezebel)

-Wingnut "watchdogs" Judicial Watch are kind of pissed off that Kathryn Bigelow and Marc Boal are making the movie of the Bin Laden raid. (LA Times)

-Has anyone else heart positive rumblings about the new M. Night Shyamalan film? Darren Aronofsky has apparently. (@darrenaronofsky)

-The Perks of Being a Wallflower has a release date: September 14th, limited. (Rope of Silicone)

-The first picture of Hailee Steinfeld and Douglass Booth as Romeo and Juliet. (LA Times) 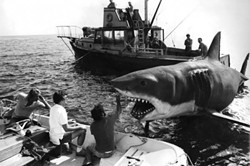 -The trailer for Inside Jaws, the feature length making of compilation from Jamie Benning, who did the filmumentaries Raiding the Lost Ark, Star Wars Begins, Building Empire and Returning to Jedi. Unfortunately, it doesn't come out in full until the end of the year. (Vimeo)

-The Intouchables, the crowd-pleaser than swept France that I imagine will eventually get a small run in Orlando. (Apple)