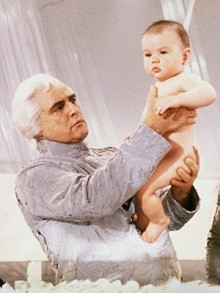 Another week, another comic book movie. This time it was Green Lantern's turn, and things did not go as for old GL as they did for Thor, which is probably why you don't want to put all of your summer dollar eggs into one basket, which you then give to Ryan Reynolds for safe keeping. But it's too late to do anything about that now, and soon we'll be on to talking about Captain America, the next movie in the series of lead ups to The Avengers.

The Tree of Life also opened in Orlando this weekend, at the Enzian, and you guys packed it in. Nice going.

I'm off to sunny, scenic Colorado for a few weeks tomorrow, and as luck would have it, the state is apparently about to burst into flames like Arizona.

Lastly, happy father's day to all you goons out there who fumbled with the condom like Seth Rogan in Knocked Up. Don't worry that you'll never be as cool as Jor-El. Pretty soon Jor-El won't even be as cool as Jor-El either, as you'll read in a moment.

-I missed this last week, but here is a teaser shot of Emma Watson as Sam in The Perks of Being a Wallflower. Well, holding the book anyway. I remain cautiously optimistic, but still very unconvinced by any of the casting choices aside from Mae Whitman, who is probably about as perfect as you could get for Mary Elizabeth.

-We shouldn't expect movie news to come out of San Diego Comic Con this year, as fewer studios will be making big presentations. Probably for the best, since it's usually just news saturation instead of a flow of news.

-The NYT has a profile on Ryan Reynolds, who stars in Green Lantern. You know, if you're into that sort of thing. (You guys owe me one free article for this sacrifice.)

-Matt Singer is on point again at IFC News about nostalgia in all of its forms and Woody Allen's Midnight in Paris. (Spoilers)

-Criterion has a nice gallery of iconic shots lensed by Gunnar Fischer, who was Ingmar Bergman's cinematographer before Sven Nyqvist for films such as The Magician, Persona and Wild Strawberries, and, of course, The Seventh Seal.

-First picture (that I've seen anyway) of Sascha Baron Cohen in his new get up, The Dictator. Heil Hinkle! Oh, wait, that's the other one...

-If you're an Indiana Jones fan you probably know a lot of the "30 things You Might Not Know about Indiana Jones, but there are still some surprising things, especially from the Raiders novelization, which, sad to say, is the only one of the three novelizations that I don't own. Yes, I read novelizations when I was younger. Shut up.

-Can Russell Crowe fill Marlon Brando's Jor-El boots? Brando's speech (used heavily in the Returns trailer) is still one of the most iconic speeches in film history. I like Crowe as an actor, but he doesn't have that great voice like Brando. No one really has a great voice anymore. I miss you, Jason Robards.

-Solaris fans, get ready to finally read the real book by Polish author Stanislaw Lem (who, I believe, actually hated the film quite a bit). The first direct-to-english translation has hit the shelves now, translated by Bill Johnston. Well, you can listen to it for now anyway, as there are legal entanglements with the print edition.

-The Coen Brothers and Noah Baumbach talk about story and film openings and how much they cinematically repeat themselves at New York's Lincoln Center.

-"The Academy Award for Best Stunt in a Motion Picture goes to..." (Seriously, they should probably get one, but that category and six or seven others should all be announced before the award show begins.)

-David Mamet's new book, The Secret Knowledge (which is essentially "fuck everything liberal"), apparently puts his play Edmund into a new perspective.

-Here is a shot that the paparazzi got of David Mamet coming out of Mr. Chow last night. Oh wait, that's a still of Red Skull from Captain America.

-Based on the teaser image from their latest newsletter, look for a box set of Krystof Kieslowski's The Three Colors from Criterion in the coming months. When they teased this teaser (damn youse), I was really hoping for In the Mood for Love. It's a cinematic crime that it isn't out on bluray anywhere in the world. A CRIME. No, seriously, get on that shit already, Criterion.

-You can watch Spike Jonze-Arcade Fire short film, Scenes from the Suburbs, online on MUBI starting Monday, June 27th if you don't want to wait for the deluxe edition of The Suburbs. I'll remind you next sunday too.

-Starz has ordered Netflix to stop streaming Sony films because of some legal issues with subscriber numbers, blah, blah, blah. This might mean something if Starzplay offered anything in HD, but they don't, so it all looks like shit anyway.

-Yahoo has the trailer for the Aaron Sorkin-scripted, Bennet Miller-directed Moneyball, about Oakland A's GM and co-owner Billy Beane (and his psuedonym staff), who brought in a new system of scouting players by deep analysis of numbers...that ended up working for pretty much everyone in baseball but the A's.

-Apple has a new Tree of Life feature where David Fincher and Chris Nolan hawk the film so Malick doesn't have to. It's good to be the king.

-While you're at it you might as well watch the trailer for Harry Potter and Deathly Hallows: Part II.

-The red band trailer for 30 Minutes or Less looks like they gave away pretty much everything funny about the movie.

-In case you've been bad this week, here is your punishment: The Chipmonks: Chip-wrecked trailer.

-This week's vintage film article delves into the most frustrating Goddamn aspect of dating. I guess sex and money are a little bit frustrating too, but movie taste more so, dammit.

-Countdown with Keith Olbermann is back tomorrow on Current TV, don't forget.