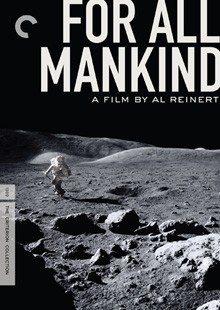 It was a hell of a rough seven days, days that saw the end of Tony Scott, Phyllis Diller, Jerry Nelson and Neil Armstrong. For our purposes here, Tony Scott was the biggest loss, but personally, while I liked the other three, I admired the hell out of Neil Armstrong as much for his stoicism as his bravery and feats. He didn't go around punching naysayers, he just let himself be. Really, what's not to admire? If you haven't already, you should watch For All Mankind today. Just because. (Be aware, though, that if you're looking at a picture of an astronaut on the moon, it was probably not Neil Armstrong, it was probably Buzz Aldrin, or from a different mission. Armstrong was the photographer, Aldrin the subject in almost all of the shots, though here is a particularly great one Buzz took of Neil from The Big Picture.)

But Tony Scott. Tony Scott. I've seen some Tweets complaining about critical revisionism when it comes to Tony Scott, which I find a little unfair. It was mostly older critics who didn't like Tony Scott movies. Those critics were raised on a different type of Hollywood, New Hollywood and earlier. We're now in a time of criticism where the critics writing today grew up on 80s movies and hold them fondly in heart, even if only for sentimental reasons. 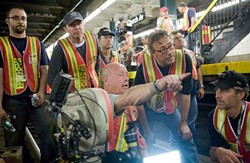 People my age, born in the late-late 70s or early-early 80s) love movies Top Gun and Crimson Tide. I could take them or leave them personally, but it's not wrong that people like them. There is acceptance, one I go along with, that you're getting pure popcorn, you're not getting a psychological drama. Basically, that you're getting a movie not a film. If I had drawn the review for Taking of the Pelham 1-2-3 or Unstoppable, I would have given them good reviews despite the shallow pond of human emotion. They're just gripping, fun movies. They'd almost be better without the 10 seconds of character development spackled into them. Tony Scott was an ace at that type of movie, and he never lost his way the way Ridley did. The two brothers were also behind one of my favorite films, despite the fact it was made for TV, RKO281, about the battle for Citizen Kane.

-Jerry Nelson, the puppeteer behind Sesame Street's the Count, among others, died this week. I was terrified of the Count as a child. I used to cry whenever he came on, like he was going to come out of the tv and suck my blood -- 1 quart, 2 quarts, 3 quarts. How silly. (AV Club)

-Thinking about drawing one of those turtles and enrolling in Art Institutes? Maybe read this and think again? (Tumblr)

-What's it like to be a film critic in Iran? It's tough. (Critic Wire)

-A bit about the new short that will be on the Brave DVD. (Pixar Planet)

-A really great interview with Whit Stillman about what works and doesn't work in Metropolitan. There is some great advice in there. Damsels in Distress comes out on bluray in a few weeks also. (The Awl)

-Newsweek's profile of Paul Thomas Anderson in the run up to The Master being released. You may want to bookmark it and read it later, as it contains spoilers. No word on an Orlando release yet. (Newsweek)

-And here's an Amy Adams interview as well. (Vulture)

-Dreamworks Animation jumps to from Paramount to Fox for the next five years. (Cartoon Brew)

-Not the top of my list when it comes to lost films, but it's always nice to hear about something being found. (Kartemquin Films)

-Beasts of the Southern Wild's Quvenzhané Wallis on mud, seafood and burps. (Rookie)

-You might want to pick up the Howard's End bluray from Criterion. Sounds like it's about to go OOP as Merchant Ivory is suing Criterion for copyright infringement, alleging their distribution deal had ended. (THR) 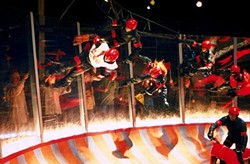 -Kind of shitty, but John McTirnen (Roller Ball) lost his appeal and is going to jail for a year for having Anthony Pellicano bug his Roller Ball producer's phone line. Personally, we think being known forever as "Director of Roller Ball" instead of "Director of Die Hard" is a better sentence. (Twitch)

-Fox is rolling out its Director's Signature Series bluray collection with War of the Roses, Wall Street, Hoffa, The French Connection, The Brothers McMullin and She's the One. Two of these are not like the others. (Criterion Cast)

-Stacy Peralta has another skateboard doc coming, this one about the Bones Brigade who made the best skate tapes ever in the 80s, featuring the likes of Rodney Mullin, Steve Caballero and a (very) young Tony Hawk. (Playlist)

-Some stills from The Perks of Being a Wallflower. Emma Watson is "swaddled in tulle" because she's doing Rocky Horror, not because it's a couture movie. I don't believe this film will be infinite. (Moviefone)

-The first trailer for The Girl, with Toby Jones as Hitch. (THR)

-Two new trailers for the new Kiyoshi Kurosawa film, Penance. Looks like he's gone back to horror after Tokyo Sonata, which was actually kind of a horror film without the blood. (Twitch)

-The first picture of a blood-soaked Chloe Moretz in the remake of Carrie. (Movieline)