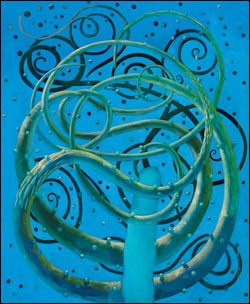 STEVE AND THEO LOTZ This is the closing reception for Crealdé's A Father and Son Painting Exhibition. The family name Lotz carries an earned cachet for artistic talent in this town. If you're not familiar with the name, the timing of this double exhibition catches father Steve after his 1969-2003 career at the University of Central Florida, during which time he served as the head of the art department and was integral in establishing the faculty, which is still distinguished as a creative nexus. And it captures son Theo in his early years at UCF, where he serves as studio art instructor, director of the UCF gallery and the coordinator of the Florida Art in State Buildings Program; this, after he worked for several years as the assistant curator to the Cornell Fine Arts Museum, shortly upon completing his master's of fine arts at Louisiana State University. Though she's not represented in this show, wife/mother Gretchen is a sculptor in her own right and shared a duo exhibition with her husband in 1999 at UCF. So it's easy to understand the popularity of this collaboration and the decision to close the show with a slide lecture by Steve Lotz. When it comes to the art works, it's not exactly a case of like father, like son. Curator Rima Jabbur has observed that the father's paintings have a fragmented fantasy element, while the son's painted portraits are precise and analytical. (7 p.m.-9 p.m. at Crealdé School of Art, Winter Park; free; 407-671-1886)

PETER MAX Dude, remember that time we got all wasted and lost our minds looking at that painting by the guy who did Yellow Submarine? It was great being part of the revolution and all, seeing the world through Owsley-colored glasses and really sticking it to the man and all. And, like, since he's designing phone book covers and doing artwork for, like, the Super Bowl, and, like, showing up in person to sell his own work, I totally don't feel, like, you know, a tool for showing up to a "gallery" that, you know, "specializes in residential, corporate and hospitality artwork" to meet the dude and, like, max out (get it?) my Amex Black to pick up a few pieces for the ninth bathroom I just added on to my house. Dude. (6 p.m.-9 p.m. at Russell Alexander Fine Art; also Saturday 4 p.m.-8 p.m. and Sunday 1 p.m.-3 p.m.; free; RSVP to 888-513-8385)

JIMM ROBERTS Bill Cockrell will be providing tunes, Urban Think will be providing refreshments and noted local photographer Jimm Roberts will be signing his new, tongue-trippingly titled tome, Southernmost Art and Literary Portraits: Fifty Internationally Noted Artists and Writers in the South. For a moment, allow yourself to remember that you live in Florida, a state of crazy people that, believe it or not, is part of a vibrant, kooky and intelligent Southern artistic tradition. (6 p.m.-8 p.m. at Urban Think Bookstore; free; 407-650-8004)

ROLLINS DANCE XX As good as an encore presentation of your favorite TV series, Rollins College is using their spring event to recap productions that you might have missed the first time around. This annual collaboration between the departments of dance at both Rollins and Valencia Community College is made up of three original pieces: "Bolero," staged by Gerard Alexander of the Alvin Ailey American Dance Theater; "Four by Three," choreographed by W. Robert Sherry, Rollins director of dance; and "Heartland," which is the step work of Lesley Brasseaux, who's on the faculty at both of the represented schools. (8 p.m. Friday and Saturday at Annie Russell Theatre, Rollins College, Winter Park; $10; 407-646-2145; also 8 p.m. Friday, March 24, and Saturday, March 25, at Valencia Community College Performing Arts Center; $6; 407-582-2900)

SHONEN JUMP'S YU-GI-OH TCG CHAMPIONSHIP We're not ready to wager that it'll ever match the sex appeal of that other card game, but a trading card game that offers a chance to "prove that you are a champion" and win "unprecedented prestige and prizes," well, that's at least intriguing in our book. Tournament players compete in "40 minute Swiss rounds, cut to Top 8 single elimination finals on Day 2." Who knew trading card games were so technical? Not us. But when you're playing for prizes like a laptop and "Des Volstgalph" (a Yu-Gi-Oh card brand-new to North America), who wouldn't be a tad legalistic? Especially when finishing in the top eight gets you an invitation to Nationals. Take that, Texas Hold 'Em. (8:30 a.m. at Osceola Heritage Park's Exhibition Building, Kissimmee; also 9 a.m. Sunday; $3 per day; $5 weekend pass; tournament entry fees $15-$25; 352-404-9500)

CHILI CHALLENGE "Think outside the bean." Well, at least try to think past the corny slogan. Second Harvest Food Bank of Central Florida is sponsoring this second annual event, where you can sample chili from "mom and pop" businesses as well as well-known restaurants around town. Things might get a little heated (bad pun intended) as teams prepare chili for parents and children and everyone in between to sample. You can't beat an event that offers free admission to children under 12 and unlimited half-price ticket coupons (print as many as you like from the website). But really, why would you want to be cheap when all the profits are going toward Second Harvest, a nonprofit organization that collects, stores and distributes donated food to more than 500 nonprofit partner agencies in six Central Florida counties? After all, you'll just be spending the few bucks you save on antacid, while in Second Harvest's hands, the money will actually feed people. (Noon-5 p.m at Heritage Square, downtown Orlando; $10; 407-295-1066, ext. 24).

AMP'D MOBILE SUPERCROSS Organizers of the Amp'd Mobile Supercross will once again truck 500 pounds of dirt into the Florida Citrus Bowl to form a track for the sport's largest stars. Florida riders Ricky Carmichael, Chad Reed and James "Bubba" Stewart have been dominating the series this season and plan to continue that in their home state. The day will be filled with practice runs and qualifying heats before the real competition starts. "The racers all start at `the` same time and race down to `the` first turn, which separates the guys. … Imagine 20 cycles going around a tight turn," Denny Hartwig, an event organizer, says. "It's a really exciting part of the race, and it usually involves crashes." Admit it, no one can resist crashes … and watching these won't get you yelled at by some jerk in an SUV. (7 p.m. at the Florida Citrus Bowl; $12-$32; 407-849-2500)

THE MARRIAGE OF FIGARO "Oh crap! Mozart's turning 250 this year. We better do something!" We don't know for sure, but we've got a sneaking suspicion that this sentence was uttered somewhere in the halls of Orlando Opera, as the haste with which this last-minute addition to their season was announced was somewhat surprising. (Operas aren't known as the most spontaneous organizations when it comes to planning; if you want to talk about the whiskey-drinking, pill-popping, naked mud-wrestling parties we think they engage in, well, that's a different story.) We dig surprises, we dig Orlando Opera and despite the fact that we first thought Chuck Jones wrote it, we dig The Marriage of Figaro. Do yourself a favor and reward OO's "spontaneity" and show up for what's sure to be a great performance. You never know, they might put on a mud-wrestling contest next. (7:30 p.m. at Dr. Phillips Center for Performing Arts; also 8 p.m. Friday, March 24, and 2 p.m. Sunday, March 26; $13-$24; 407-426-1700)

Got an event you'd like to see considered for Selections? We won't make any promises, but send the info (at least three weeks in advance) to [email protected] and we'll think about it.