SOLE Although Sole is the theoretical headliner on this bill, this show could realistically be called "The Anticon Allstars Revue," as it features the label's cofounders (Sole, Pedestrian) as well as Dosh. Sure, there are other excellent Anticon artists (Odd Nodsam, Alias, Jel) that aren't coming, but this is about as concentrated a dose of the label's defiantly creative hip-hop spirit as you're likely to get. Touring in support of his new, non-live album Live From Rome, Sole is bringing members of Twelve, a band from his new home of Barcelona, and we're hoping their live instrumentation will elevate some of the more disappointing musical/production aspects of Rome. Regardless of what happens, though, count on it being exactly what you didn't expect from a hip-hop show … or any other show, for that matter. (with Pedestrian, Dosh; 8 p.m. at Will's Pub; 407-898-5070; $6) 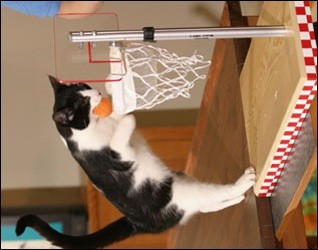 THE CENTRAL FLORIDA HOME & GARDEN SHOW Judging by the looks of the hunky guests (Eric Stromer of Clean Sweep and Bill Duggan of Curb Appeal), this annual prompt for spring cleaning is aiming for feminine appeal. If you're mad about keeping up with the Joneses, then this congregation of 500 trendy exhibitors will inflame those covetous inclinations. New products are pampering (shoes to massage your tootsies while cooking) and lifesaving (window film that withstands 130 mph winds). But one of the most frivolous demonstrations – which means it'll be popular – is the performance by the Friskies Cat Team. Romping around their cat-friendly-designed living room, the supercats will shoot hoops, exercise on a treadmill, play Simon Says, cross a bridge and run an obstacle course. If you've been hankering to build a "feline friend room," where your cat can entertain in private, experts will be on hand with answers. (10 a.m.- 9 p.m. Friday and Saturday, 10 a.m.-6 p.m. Sunday at Orange County Convention Center; 800-645-7798, www.orlandohomeshow.com; $8)

OEDIPUS THE KING Oedipus the King is more than just the story of a guy who got a little too close to Mommy. It's a 2,500-year-old text that set the standard for Greek tragedy – and thus every serious example of stage drama that's come after it. That rich pedigree is one of the reasons that veteran director/performer (and theater-history teacher) John DiDonna chose Sophocles' immortal narrative for the debut of his Empty Spaces Theatre Company – the latter the latest in a seemingly endless string of producing collectives this workaholic has helped to establish. DiDonna says that he and Empty Spaces co-founder Seth Kubersky have treated Oedipus like a new play, breaking it down to its primal essentials and building it back up as a typically experimental evening of outdoor theater that emphasizes "tribal" and "ritual" elements. Even if those words ordinarily fill you with theatergoing dread – the cast of Hair was a "tribe," remember? – DiDonna's spotless rep is impetus enough to look forward to this talked-about foray, which will be enhanced by live drumming, chanting and Asian puppetry. As Freudian icon Oedipus moves ever closer toward his eye-gouging destiny, a highly athletic 12-member chorus will gyrate to rhythmically compelling musical accompaniment that's to be banged out on drums, flutes, gongs, wood blocks, rattles and some instruments created especially for this production. Kick out the jams, motherfuckers. (8 p.m. at Studio Theatre Courtyard; through April 17; 407-328-9005; $12, $15)

THE SWORD OK, we've gotta admit that we never really got on the Trail of Dead bandwagon, but that's okay. We understand we can't love everything, plus we heard their last show here was completely, explosively awesome. But there are two things that do make us very excited about this show. The first, obviously, is that it will be happening at the old Beacham Theater. Anyone who went to the Guided by Voices show there was either saying, "Man, I remember when there used to be great shows here all the time; this is so awesome" or "Man, why aren't there more shows here? This is so awesome." And for good reason: Although the location is a money-making machine in its current incarnation as a dance club, it's one of the most atmosphere-rich spots in town with the added bonus that the atmosphere is historic. There are great sight lines throughout, good sound, easily accessible drinks and an inescapable sense of going to see something special. If there were even just one great rock show a month here, we would be so happy. Like we said, AYWKUBTTOD doesn't quite qualify for us; however, the opening band most certainly does. Formerly known as The Sword of Doom (!), this Austin group completely kicked our ass at South by Southwest. If you couldn't figure it out by their name, they're a metal band, something you would have known as soon as one of the guitarists whipped out his BC Rich and plugged it into his two-headed amp. Definitely in the High on Fire school of rumbling doom-groove, we can't wait to hear how monstrously loud they sound in this fabulous venue. (with … And You Will Know Us by the Trail of Dead, Octopus Project; 6:30 p.m. at Beacham Theater/Tabu; 407-648-8363; $15)

JIMBO MATHUS You might remember James "Jimbo" Mathus as a member of the Squirrel Nut Zippers, kings of the curious mid-'90s alt-swing explosion. That was his voice doing the Cab Calloway impression on their 1997 hit single "Hell." He may not have had any hits since that one, but virtually everything he's done since then has been as authentic as his former band was tongue-in-cheek. Since the Zippers went belly-up sometime around the turn of the century, Mathus has kept busy with both feet in the blues, leading bands for the recently Rock and Roll Hall of Fame-inducted Buddy Guy and helping out up-and-coming acts like North Mississippi Allstars. He and His Knockdown Society have released three albums of music culled from the misspent days of his youth in the Mississippi Delta: National Antiseptic, Stop and Let the Devil Ride, and Play Songs for Rosetta, a collection of string band music to benefit the daughter of Charlie Patton (she was also the Mathus family housekeeper when young Jimbo was growing up). So far this year, Mathus has opened a recording studio, launched a record label and released Knockdown South, an eclectic sampling of heavy blues, ragged country and hip-shaking Southern boogie. We expect a sweaty mix of straight, loud electric blues – for those of us who want a little more depth than the White Stripes can offer – and a veritable Mississippi roadside juke joint of funky backbeats and swampy guitar. Bring your dancing shoes. (11 p.m. at House of Blues-Blues Kitchen; 407-934-2583; free)

ROSEANNE BARR The reason the erstwhile "Domestic Goddess" named her current tour "Let the Healing Begin …" is because SHE HATES IT when people toss off that trite idiom. We'll take it as a good sign the bitchy female icon hasn't mellowed out too much since she yapped her way to the top in the late 1980s. Sure, this grandma has dropped more than a few sloppy pounds, polished up her personal grooming and cleaned up the outright crudeness in her comedy. But that hasn't cured her chronic state of exasperation; she still finds plenty of fodder to get worked up about, from dieting to Dubya. Fans who've followed her from the very beginning of her career as a stand-up comedian report that this tour is a reunion with Barr's brilliantly rebellious spirit. And the lady says it's not about the money, it's about the attention. That's an attitude we can relate to. (7 p.m. at Hard Rock Live; 407-351-5483; $28.50, $32.50) 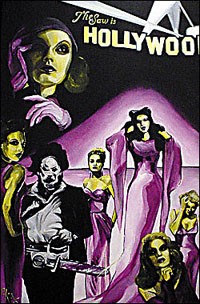 TKO ART SHOW You gotta give this couple of local artists due credit for coming up with a strategy for their duo exhibit, which opens at the 1st Tuesdays event at Taste restaurant in College Park. The glossy flier reads "Heidi C. Kneisl vs. Michael Wagganer" and features the two friends in boxing gear. The show is not about boxing, she explains, it was just a timely theme (Million Dollar Baby) they created to package their new paintings. Still, there is a theme of conflict running throughout the work, she says. As for Wagganer (singer for the Real Love Diplomats), "He definitely has a sense of animation to his paintings – an overexaggeration in a good character way." And Kneisl (a former bartender at Midtown Tavern, where she met the singer) says her own work "tends to be more realistic. I use a lot of colors that aren't necessarily real." The piece "Hollywood Babylon," for instance, is about the ongoing battle in Hollywood as to what's going to make the most money. Curiously, the like-minded artists were both married this past year – and not to each other, though Kneisl says that their spouses are eerily similar. There will be music by Punk Rock Jason at the opening, and the art will stay on the walls through April. (7 p.m.-10 p.m. at Taste; 407-835-0646; free)