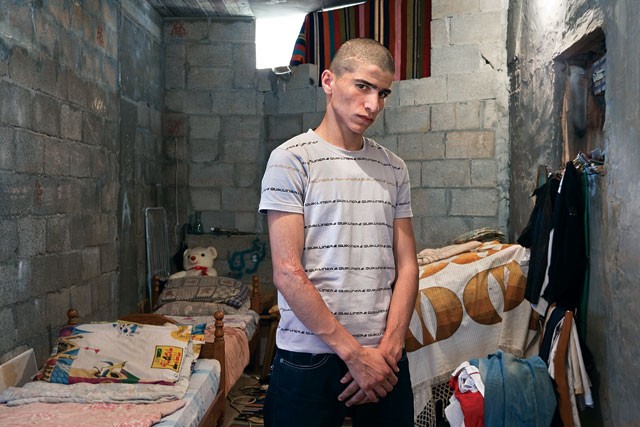 A sojourn to Daytona usually involves the grittiest beach in Florida or guttural worship in the open-pit temple to Americana that the Speedway has become. Neither lends itself easily to the very fine fine-art photography housed at the Southeast Museum of Photography. Intrepid wayfarers, once past the Speedway's gargantuan maw, may yet turn away upon arriving at Daytona State College – the museum's interior meekly beckons through an insipid timeshare-esque lobby – but brave seekers who venture in will be culture-shocked into submission by five very serious exhibits. Until May 12, the SMP's bottom floor features the work of Irina Rozovsky, Natan Dvir and Dana Popa's in Russia, Israel and Moldova. On the upper floor, work by Janelle Lynch and Lorena Guillén Vaschetti is displayed through April 14. All five artists confound the viewer with chilling questions of personal identity in an uncertain world.

Pulling back the covers to reveal the stained mattresses and dark corners of today's global culture, the three downstairs artists photograph listless working-class Russians, sun-baked Israelis and sad, dehumanized Eastern European sex workers. These last are pitiful, covering their faces or turning away from the camera, and in Not Natasha Popa contrasts their lost childhoods with too-bright religious icons and household fabrics. Look for the swaddled baby, held in desultory fashion, a symbol of future's hope lost.

On the other side of the wall, Dvir's portraits of Arab teenagers in Israel (Eighteen) spew anger and hostility at the camera. Israel's social system scars these unsmiling young people, dark and glowering, cocooned in bright neon fuchsia and lemon-tinged bedrooms. It's like unwrapping a candy only to find a lump of hot coal burning your hands. By contrast, in One to Nothing Rozovsky's vision of Israel is all ancient stone walls and silent, stoic workers. Her series This Russia is over-bright; one thinks of the urban, underlit nighttime so common in postmodern Russian art. Frayed woolen gloves, an opera dress on a woman posing in muddy rubble, and a skeletal tent frame in "The Customer" dampen these sunny, too-white places. Surface brightness conceals a darkness within and prepares you for the work upstairs.

Lynch reveals what is hidden in Los Jardines de Mexico – "portraits" of gnarled tree stumps suggesting inner spirits; high irony in the overgrown jungle that has taken over a mass grave for homeless and unidentified people. Sentimentality unfortunately creeps in, especially in her images of weedy, abandoned children's playground equipment. But her work is stunningly sharp, crisp and vivid, tendering green restfulness and retinal pleasure.

By contrast, Italian photographer Vaschetti's blurry vintage images induce a frantic state. Historia, Memoria y Silencios is a fraction of her mother's old slides, which she rescued from the garbage, re-photographed and enlarged after her mother "lifted the weight of the family past" off her daughter's shoulders. Vaschetti presents unfocused beach vacations, jaunts to the mountains and odd bits of city and country life: a child in a suit sitting in a mountain road; a shadowy man in a dark doorway. These few intimate details of her relatives defy her mother's act of disposal, yet the soft-focus nature leaves an unslaked thirst for focus. Vaschetti, longing for closure, failed to find it in these ethereal, vaguely sinister photos. Instead these photos increasingly unsettle the viewer as they beget worse and worse imaginings.

Conventional encounters with beauty will not be found here. Instead our world's sketchy, uncertain present seems a comeuppance for the moral capital we frittered away in the past on sex slaves, unmarked graves, sublimated racial hostility and duplicitous, murky ancestry. This exhibition as a whole serves as a milestone in a world of fear and ambiguity as we step gingerly into the future.