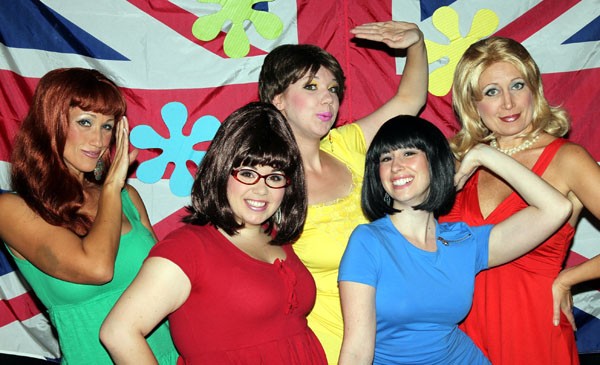 In watching Shout! the Mod Musical, now on stage at the Winter Park Playhouse, one would never surmise that anything of importance occurred during the 1960s other than an explosion of groovy fashion, singable pop tunes and colorful art. Yes, the show's creators, Phillip George, David Lowenstein and Peter Charles Morris, do offer a passing nod to the advent of feminism and the general loosening of social strictures, but Shout clearly owes more of its thematic structure to the white-bread world of inoffensive and insular '60s TV shows like Laugh-In, Hullabaloo and Shindig!

No matter. It's always more fun to recollect the innocence of youth, with its fond remembrances of adolescent love, AM radio and Beatles haircuts, than the serious aspects of the decade. So rather than revisit a time when America was tearing itself apart over political assassinations, race riots and the war in Vietnam, why not cross the Atlantic to an England that was merely "swinging like a pendulum do?"

Five mini-skirted lasses with fine voices take us on that journey, offering admirable cover versions of some of the better-known British hits originally sung by Petula Clark, Dusty Springfield and Lulu, among others. Heather Alexander, Natalie Cordone, Sarah-Lee Dobbs, Candace Neal and Kate Zaloumes all have their show-stopping moments, and under the musical direction of Chris Leavy, harmonize effectively while twisting and frugging the night away as they perform director Roy Alan's period choreography.

While Shout's music is its key component and main delight, its humor is decidedly sketchier. Many of the jokes get cheap laughs by insulting Americans, the Brits themselves, or naturally, the French. But there are some truly funny bits as the women respond both vocally and in mime to a pair of oily voiceovers trying to sell them hip clothing or useless cosmetic products guaranteed to fulfill all of their emotional and relationship needs.

The evening's highlight has got to be a stoned-out version of Shirley Bassey's Goldfinger, with the ensemble vocalizing all of the instrumental effects from the original soundtrack. Nancy Sinatra's These Boots Are Made For Walkin' also gets a fine treatment, and who can sit still whenever they hear the Isley Brothers classic, Shout? (Yes, a few tunes from the states have snuck in.)

As a historical document, Shout! The Mod Musical is a dud. As a nostalgic look at an era that featured Britain's ascendancy in the realm of popular music, and as a showcase of its female singing stars in particular, the show is entertaining and highly pleasurable. These old tunes may not be on anyone's iPod, but they still exist on vinyl, tucked away somewhere in drawers and boxes and, more importantly, on the recurring tape loops inside every baby boomer's head.