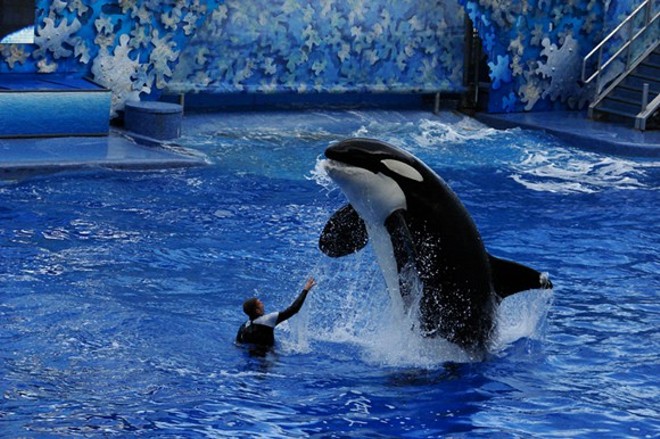 Photo via Wikipedia
While some at SeaWorld have been infiltrating the enemy, others in the company are busy filling their luggage as they move to a new position. A massive shakeup in leadership was announced ahead of SeaWorld’s quarterly results report.

SeaWorld San Antonio’s President Dan Decker is leaving the company. Carl Lum, who currently oversees Busch Gardens Williamsburg and Water Country USA, will be heading to San Antonio to replace Decker. Lum served as the VP of Finance for Busch Gardens Tampa before moving to his current position at Williamsburg in 2010.

Dr. Christopher Dold is moving up from VP of Veterinary Services to Chief Zoological Officer as Brad Andrews shifts into a new role as Zoological Director Emeritus. Andrews will oversee conservation efforts and new product development.

SeaWorld also announced a new Resort Development Group. This new division in the company will focus on resort construction and development efforts that SeaWorld’s CEO Joel Manby announced in November. The new Resort Development Group will be overseen by Steve Iandolo, appointed to the newly created Vice President of Resort Development position. Iandolo is familiar with Orlando having formerly served as the Creative Director – Hotels at Universal Orlando. While at Universal Iandolo oversaw the opening of the Portofino Bay, Hard Rock and Royal Pacific resorts. He also worked on the paused Universal Dubai and Shanghai projects. He most recently worked at Herschend Family Entertainment where he served in a similar role as the new one at SeaWorld under the leadership of Manby.

This leadership shakeup is just the latest move that SeaWorld CEO Joel Manby has done since coming to the Orlando-based entertainment company. While at Herschend Manby expanded the company well beyond the theme park base through new resorts, entertainment (including purchasing the Harlem Globetrotters and Ride The Ducks) and stand-alone attractions, such as the operational rights to Stone Mountain in Georgia. Manby has been clear on his focus to invigorate the pre-existing SeaWorld parks with new offerings while also looking to better use the property they own with new resort investments.