EDWARD P. JONES The words elicited from this reticent Pulitzer Prize-winning author should make for an interesting evening when he appears for the intimate Winter With the Writers series at Rollins College. Jones isn't known for small talk or self-aggrandizing, and he has answered way too many obvious questions already about how he – the 50-something, educated son of an illiterate hotel maid and restaurant worker raised in poverty in Washington, D.C. – was able to write a debut novel that went all the way to the top in 2004. The Known World is a fictional accounting of the residents of the imaginary county of Manchester, Va., in 1855; in particular, it's a story about a free black man who owns slaves to work his plantation. According to Jones, the book is neither a statement on racism, nor is it historically accurate; rather, it's a reflection of the boundless imagination of a natural writer. (8 p.m. at Bush Auditorium, Rollins College, Winter Park; 407-691-1159; free)

SASHA Stay with us – this gets a little confusing, but it's worth it to pay attention. Like many other people, we've been left feeling powerless when it comes to helping the Asian tsunami victims. After you Paypal some money to the Red Cross, your options get limited. We've been to some of the locally organized benefit shows and, although they were well-intentioned events that raised decent amounts of money, the familiar environs and rosters of local bands meant that they didn't feel very special. This event – rather, events – will be special, since it's not every day that an internationally famous DJ drops into town to play a double-club gig, all in the interest of raising money for other people. After the bottom fell out of Orlando's dance-club scene (thank Glenda!), we've still managed to get our fair share of techno and house superstars in town for various gigs; and even though Sasha's current status as a Florida resident might mean his forays into The City Beautiful are more frequent, we guarantee you there are several other big cities around the world that would kill to have him play two intimate gigs like this in one night. In other words, folks, this is a Very Big Deal. Why would this be confusing? Well, there are two gigs. The first is at Pulse; it starts absurdly early and is absurdly expensive (hey, it is a benefit), but admission is limited to the first 250 people and the party includes food from the fine folks at Hue. The second show kicks off at Blue Room, with some local DJs spinning until Sasha shows up. The latter gig is bigger (and was cheaper until tickets got scarce), but not a whole lot less intimate, with only about 500 tickets being sold. There will be auctions of signed vinyl and photos, and all the money will be going to UNICEF. Excellent, especially if you can get past the fact that someone decided to mix up a special drink in honor of the victims, but was thick-headed enough to call it the "Surge." (7 p.m.-11 p.m. at Pulse; 407-649-3888; $100/sold out; 9 p.m.-3 a.m. at Blue Room; 407-843-2583; $100 standing-room-only tickets, $1000 for table of four; www.getinvolvedorlando.com)

TWELFTH NIGHT While the Rollins College Department of Theater and Dance is talking up its production of Twelfth Night as the latest chapter in its "ongoing love affair" with Shakespeare, it would be just as accurate to say that the show represents another milestone in its audience's newer but no less intense love affair with actress Jill Jones. A junior who's already performed well-received turns in Extremities and Oscar & Felix: A New Look at the Odd Couple, Jones is taking on the role of Olivia in the Bard's comedy of mistaken identity and gender impersonation – this time presented with an extra layer of cross-dressing subterfuge. Basically, the character that Jones' Olivia falls in love with has been changed from a woman masquerading as a man to a man masquerading as a woman. "There's something interesting about that," Jones understates. After this Night is over, the actress will shift her focus to the upcoming Orlando International Fringe Festival, for which she has hopes of working with old friend (and former iMPACTE! Productions stock player) Josh Horn. Also expect a Fringe show starring Jones' sister, Sara, who recently wrapped a weeklong cabaret festival at her own school, the University of Central Florida. Any more activity, and you'll need the theatrical equivalent of Yahoo! Instant Messenger to keep up with these Joneses. (8 p.m. at Annie Russell Theatre, Rollins College; through Feb. 26; 407-646-2145; $5-$19)

SAM VERELLA BENEFIT Sam Verella, former owner of ARS Studios, died unexpectedly Dec. 31, 2004. As both a family man and an integral part of Orlando's heavy-rock scene, his loss was felt by many, and these two benefit shows – organized by Clint Campbell and Kevin Ladd, each of Will's Pub and members of local bands – have gathered some surprising lineups, both to honor Verella and to raise money to help out his family. Campbell met Verella three years ago while working the door at Will's. "Sam knew that I was interested in recording," he says. "I didn't know anything about it. He told me that I should hang out with him at the studio and that he would teach me whatever I wanted to learn." Ladd's last two CDs were recorded with Verella, but their relationship was more than just professional: "We were good friends for about five years. I worked on his house. Our wives were pregnant together. I had to do something for him." That "something" wound up being the reunion of two fairly legendary local heavy bands, The Kill and Skrape. Next week will be another benefit, this one at The Social; don't worry, we'll let you know about it, too. (5:30 p.m.: 3rd Limb, Milka and The Kill; $8; 9:30 p.m.: In This Day, Bastard Pie and Skrape; $12; Will's Pub; 407-898-5070)

STARS ON ICE Now, we know that figure skating isn't a typical interest of the hard-living, exertion-phobic Orlando Weekly readership. But you know who goes crazy for the stuff? Mothers! So why not take dear old Mom to see reigning Olympic champion Sarah Hughes, two-time champ Ekaterina Gordeeva and a host of other toe-loop specialists spin themselves into a blade-dulling tizzy? It's a great way to say "I love you" to the old broad when she least expects it (given, that is, that you're still on speaking terms). And if you're worried that the entire extravaganza will be too redolent of sequins and schmaltz for your Boitano-battered soul to withstand, remember that the evening is presented by Smucker's, which should inspire a whole passel of inappropriate remarks you can blurt out at crucial moments. Like, "Man, those Smuckers can skate!" Or, better yet, "I paid top coin to see a triple axel, so move your asses, you Smuckers!" (7:30 p.m. at TD Waterhouse Centre; 407-849-2020; $25-$58)

KYNDA One of Orlando's few touring jam-rock bands, Kynda has announced its plans to disband at the end of the month. The group is now touring through Jacksonville, Fort Lauderdale and Miami before playing these final shows at the location of their first gig. "It's sort of like an old dog going home to die," founder Tony Hume says. They began as cover band 4:20 back in 1996, funkifying Grateful Dead and Phish tunes; when they began strumming out more of their own tunes, they changed their name to Kynda. The band spent much of its time touring the country, but it was the last tour that did the guys in; the appeal of living out of suitcases while spending time away from the young'uns had worn off. The split is amicable, but no less depressing for jam fans. In order to ease the pain, Kynda embarked upon a final run of shows, highlighted by a February gig at Hard Rock Live at which they performed every song they had ever written, in chronological order. At these final two shows at Reilly's – which will be the last full-blown Kynda gigs; an intimate acoustic show is scheduled for next week – Kynda plans to play each of their 100 songs, which hurts our heads considering the band has played 1,000 shows together and has never repeated a set. "We'll probably end up playing past closing time," Hume says. Hand us the coffee, boys. (10 p.m. at Reilly's Lantern Pub; also Sunday, Feb. 20; 407-351-2260; free)

EUGENE CHADBOURNE Over the course of a career spanning several decades, multi-instrumentalist/singer Eugene Chadbourne has worked with heavy hitters in both the free jazz and underground rock circles, and released an innumerable amount of haphazard recordings in the process. Drawing inspiration from the likes of fellow innovators and longtime collaborators including John Zorn, Derek Bailey and Camper Van Beethoven, Chadbourne's signature oddball approach is to channel any array of musical genres through his unique, idiosyncratic vision, which usually results in a mercurial blend of acid-country, rock distortion and avant-jazz: Chadbourne has been known to chaotically reinterpret everyone from Johann Sebastian Bach to Jimi Hendrix. But more than likely, he'll always be remembered as the weird guy who once played an electric rake with blenders for a backing band. This visit through town, which sees Chadbourne briefly reunited with über-percussionist and collaborator Han Bennink, should be one for the books. (with Han Bennink Duo; 10 p.m. at Will's Pub; 407-898-5070; $10) 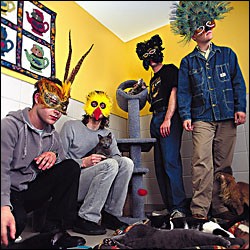 BEEP BEEP We're a little over Omaha. From what we gather, once you dig your way through the 400 feet of snow on the ground, the streets are paved with cool, and postmodernism drips from municipal taps. We like the bands and all, but dammit, we want our backwater to get a little acclaim. We may not have anyone in Orlando as self-important and overrated as Conor Oberst (well, anyone other than us, that is), but we think we've got an answer to Beep Beep. This Omaha band features members of The Faint and Criteria, and plays a hip, knowing brand of indie pop with plenty of bottom-end flourish and dance-music keyboard-playing. And that's just fine. But what Omaha doesn't have is The Zax, consisting of members of … well, some local high school. The Zax play saccharine, '80s-style pop on their keyboards, but they have absolutely no sense of irony. Really! And they've got a giant, plate-metal keyboard stand that spells out their name. So take that, Saddle Creek; you know we've got you beat. (with The Zax, Fashionista; 8 p.m. at The Social; 407-246-1419; $8)