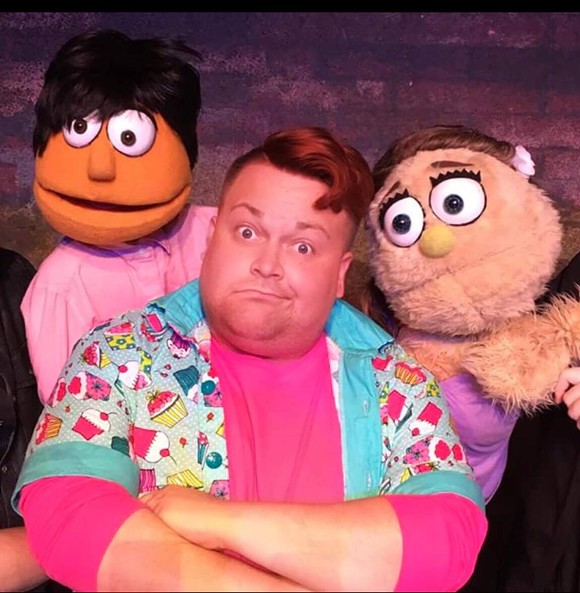 Photo provided by Clandestine Arts
Joshua "Ginger Minj" Eads drops his drag to play "Brian" in 'Avenue Q' with Derek Critzer as "Princeton" and Savannah Pedersen as "Kate Monster."
Joshua Eads is internationally known as "Ginger Minj," thanks to star-making appearances on "RuPaul's Drag Race." But those of us in Orlando's theater community remember him as a talented actor in or out of a dress, which he'll again demonstrate this weekend as "Brian," in Clandestine Arts' limited run of Avenue Q at Bay Street Players in Eustis. Photo courtesy Clandestine Arts
We asked Eads why he chose to take on the role of the loveable everyman in director Derek Critzer's production, and here's what he had to say:

Joining the cast of Clandestine Arts’ Avenue Q was just meant to be! For the past three years I’ve spent my Octobers in Texas, playing Dr. Frank-N-Furter in Rocky Horror, but there was an issue with the rights this year and the show was canceled, freeing up the last two weekends of October for me.

I’ve been touring non-stop in the midst of filming two tv shows and three movies (my latest with Jennifer Aniston) and recording my second album, so I originally intended to take the time off as a vacation and recoup before heading back out on the road through the end of the year. Had it been any other person asking me to do any other role, I probably would have said no thank you and hibernated for a while, but Derek is a friend who has always been there and believes in me, even before Drag Race.

I love drag and I love where my career has taken me, but my first love will always be Theatre and I so rarely get to play honest-to-goodness boys anymore. It has certainly been an interesting challenge taking the femininity out of my body language! Avenue Q is a show I’ve always loved and Brian is the character I’ve always most identified with. He’s just a regular guy who wants to make people laugh and maybe make a little money doing it. He’s got his faults as much as anyone else, but he’s loyal and loving, and I’d like to think we have that in common.

Clandestine Arts' Avenue Q runs Oct. 26 through 29, with performances at 8 p.m. on Thursday through Saturday, and 2 p.m. on Saturday and Sunday. Bay Street Players is located at 109 North Bay Street in Eustis.

Tickets available online at baystreetplayers.org, or call (352) 357-7777 for more information.