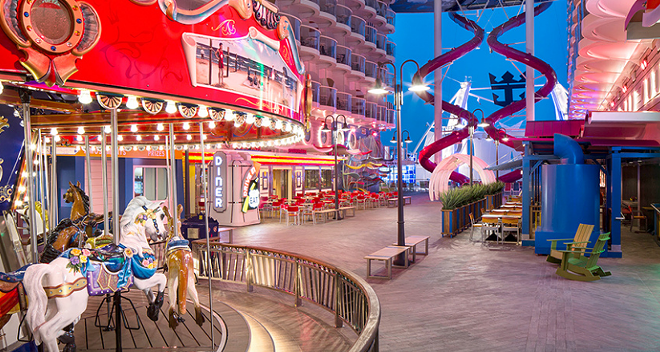 Royal Caribbean gave new details on the massive cruise ship, including confirmation that it will sail out of Miami with its sister ship, Allure of the Seas (which is the only ship out of the now four Oasis line ships to have never held the "world’s largest" title). This will continue the trend of having the entire Oasis family of Royal Caribbean ships being based out of Florida.

The 6,780-passenger ship will feature many of the same amenities as the current world’s largest cruise ship, Harmony of the Seas. The ships, which are the same length, have the same layout: seven neighborhoods including the Central Park that has become so iconic for the Oasis ships. Symphony’s Central Park will feature 12,000 plants. The ship will have 2,775 staterooms, 28 more than Harmony of the Seas, with the highest number of ocean-view cabins at sea. Most details of the more than 20 dining options have yet to be announced, but Royal Caribbean did confirm Jamie Oliver's Italian will be included.

Five pools have been confirmed for the new ship, including one in the adults-only Solarium. The Harmony of the Seas didn’t feature a pool in its Solarium, a move that proved to be unpopular with many. Royal Caribbean CEO Michael Bayley has confirmed that Symphony’s Solarium will be a departure from what they’ve done previously. Details beyond the new pool have yet to be shared.

All five pools will feature lifeguards after Royal Caribbean confirmed last month that it is planning to roll out lifeguards at all of its pools. The only other cruise line to feature lifeguards at all pools is Disney Cruise Lines.
Another difference from Harmony is a yet-to-be-announced new attraction. Few details on the new experience are known, with Royal Caribbean only saying it’ll be “a new scale of daring.” There should be updates to the 10-deck Ultimate Abyss dry slide as well.

Other amenities include Royal Caribbean mainstays like the Aqua Theater, the FlowRider surf simulator, a carousel, rocking climbing walls and the robot-serviced Bionic Bar.

After doing some Mediterranean sailings beginning in April 2018, Symphony will make a transcontinental cruise to its new home port in Miami, where Royal Caribbean will be opening a massive new terminal it has dubbed “Crown of Miami.” This $250 million, 170,000-square-foot terminal broke ground earlier this month.

Don’t get too comfortable calling the 18-deck Symphony the "world’s largest," though, because Royal Caribbean just announced they’ve begun planning a fifth Oasis ship and if history is any indication, Symphony might be losing its title once the new ship is delivered in 2021.