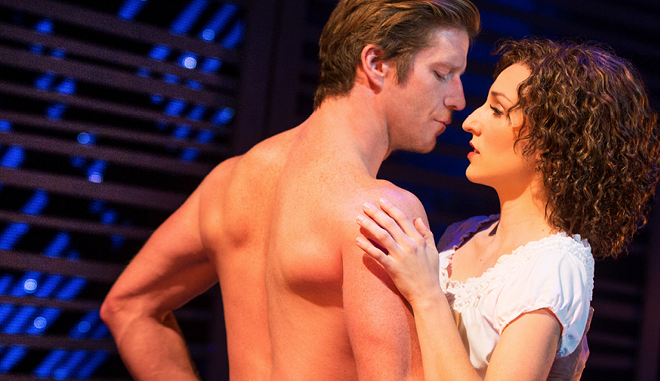 Photo by Matthew Murphy
Despite having grown up vacationing at Jewish resorts just like Kellerman’s, the Catskills summer camp that is the setting of Dirty Dancing, I’ve never been a big fan of the 1987 film (must be my pesky Y chromosome). The fan-favorite flick has followed so many other stories in the journey from stage to screen, and while I can’t say I had the time of my life, the touring production visiting Orlando’s Dr. Phillips this week includes some unexpected high points beyond the iconic dance lift.

In adapting her own original screenplay to the stage, writer Eleanor Bergstein made a wise move by subtitling the show “The Classic Story on Stage” instead of calling it “Dirty Dancing: The Musical.”

Unlike in most theatrical adaptations, Dirty Dancing’s characters don't unnaturally burst into song; instead, most of the music is presented diageticaly, either emerging from an onstage radio or phonograph, or performed live by an 8-piece band within the context of the story. That allows all of the soundtrack’s pop hits (“Time of My Life,” “Hungry Eyes,” “She’s Like the Wind”) and 60’s classics to be shoehorned in as background music without interrupting the dialogue or modifying lyrics to fit the plot.

With singers Adrienne Walker and Doug Carpenter soulfully delivering most of the vocals, the leads are left free to focus on their dancing and acting. Christopher Tierney can’t quite recreate the young Patrick Swayze’s smoldering swagger as working-class dance instructor Johnny Castle, but the the former Hubbard Street Dance performer far outshines the originator on the floor, especially when paired with Jenny Winton’s Penny. Rachel Boone looks remarkably like Jennifer Grey (at least from the 12th row of the orchestra), and exudes Baby’s idealism and awkwardness, lending a gloriously goofy sense of discovery to her growing self-awareness. Mark Elliot Wilson and Margot White provide gravitas and warmth as Baby’s parents, and Evan Alexander Smith is suitably slimy as the caddish waiter Robbie.

Unfortunately, following the peppy (if over-packed with plot) first half, the production’s promise deflates after intermission, when the stretched-thin story stalls into a slow slog towards the dance finale. Bergstein’s book brings to the forefront issues of racial equality and women’s liberation that were likely overlooked by many of the film’s fans, but the efforts at social consciousness are undermined by the sloppy, rushed staging of several crucial emotional moments, such as the intimate conversations between Penny and Baby. It doesn’t help matters that opening night was plagued by an unbalanced sound mix and multiple microphone miscues, making it difficult to discern important dialogue over the omnipresent background music.

When the anticipated climactic dance number finally arrives, choreographer Michele Lynch’s recreation of Kenny Ortega’s original moves hits all the the right marks, hammering home the big lift and reprising it for good measure. Based on the audience’s enthusiastic reactions from the opening beats to final bows, it’s clear why Dirty Dancing has been successful on stages in Australia to Europe for over a decade. But it’s equally obvious from this tour’s frustratingly fixable flaws why it never made it all the way to Broadway.