Review: ‘Crimes of the Heart’ at Theatre Downtown 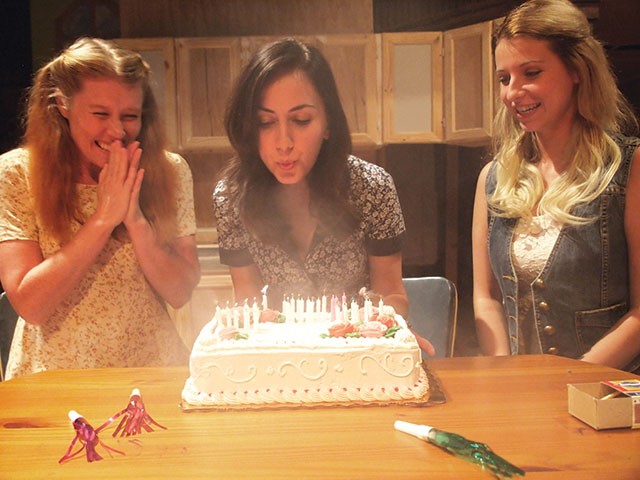 Is anything as fantastically frustrating as family? Family can bemuse, befuddle, even break your heart, and still bring you back again and again out of unconditional love. The above could apply equally to the Magrath sisters, the central clan in Beth Henley’s Crimes of the Heart, and to my relationship with Theatre Downtown, the Orange Avenue institution that’s currently presenting the Pulitzer Prize-winning play as part of their 25th anniversary season.

Lenny Magrath (Natalie Reed) is having about as bad a 30th birthday as you could imagine. A sexless, strait-laced spinster-in-training straining to care for her ailing grandfather, Lenny has lost her beloved horse to a lightning strike, been needled by her narcissistic cousin, Chick (Brenna Arden Warner) and resorted to lighting her own celebratory candles. To top it off, Lenny’s prodigal songstress sibling Meg (Vera Varlamov) is back in town, just in time to steal bites out of her birthday sweets and welcome baby sis Becky “Babe” Botrelle (Sarah French) home from jail after shooting her state senator spouse in the stomach.

The trio’s dynamic is as old as the Bible (or Charlie’s Angels): the serious brunette, the wild redhead, the simple blonde – and each sister has her own painful past to reveal. Lenny feels doomed to loneliness by an undersized ovary, while Meg left her true love (Frank Casado) in the lurch and with a limp. But Becky’s secrets, which culminated in the attempted murder of her husband, are the kind that could get someone lynched in 1974 Mississippi.

It’s no surprise that so many skeletons are dragged out of the closet in Henley’s three-act dramedy, which was nominated for a Tony award for Best Play in 1982 and later became an Oscar-nominated 1986 film starring Diane Keaton, Jessica Lange and Sissy Spacek. But it is refreshing to see strong, complex women take center stage at Theatre Downtown, where I’m more accustomed to seeing male-heavy classics or campy musical comedies. Director and costume designer Fran Hilgenberg has leavened the kitchen-sink dramatics by mining the play’s prodigious black comedy, illuminating the hysterical humor that often hides just beneath the surface of soul-crushing grief.

Most crucially, Hilgenberg has carefully cast her trio of leading ladies, who, despite superficial dissimilarities, appear authentically sisterly when sitting around scenic designer Mike McRee’s delightfully dated dinette. Reed reveals the vulnerability beneath Lenny’s rigid exterior, while Varlamov (despite an indeterminate dialect and unfortunate wig) satisfyingly taps into Meg’s sublimated rage. French’s performance, however, is the one that elevates the production above typical community-theater standards, delicately balancing on the tightrope between insane and insecure. Though her Babe may seem sweetly spacey, that’s a mask that conceals a seething capacity for vengeance; watch her eyes twinkle with bloodthirsty delight as her defense attorney, Barnette Lloyd (Jeremiah Morris), describes his “personal vendetta” against her gutshot groom.

French’s name should be familiar from her roles here and at Mad Cow in the early aughts, and it’s fantastic to have her on an Orlando stage again after an eight-year absence. (I’m arguably biased because she starred as Janet in my 2004 production of The Rocky Horror Show.) She’s been in Los Angeles during the intervening years, performing educational theater in schools across Southern California and writing and performing with Improv Olympics-winning sketch comedy troupe Monster Party (search YouTube for “Knotsie” for a sample). French has temporarily returned to Central Florida while she films an untitled Netflix series (ironically also starring Sissy Spacek) in Key Largo.

Theatre Downtown supported several of my early Orlando shows, including the Rocky referenced above. Even if I don’t visit as often anymore, when I do it always feels a bit like coming home. Like any home, it has its endearingly annoying quirks: the AC-free lobby, the epically ambling curtain speeches, the ambulance sirens slicing though subtle scenes. But more importantly, there’s a sense of community – nay, family – that has sustained Theatre Downtown for a quarter-century, as when patrons donated last November to cover unexpected electrical improvements that cost nearly $15,000.

That bond – so rare in this transient town – is why I’m concerned by rumors about plans landlord Florida Hospital has for the land beneath Theatre Downtown. Founders Frank and Fran Hilgenberg currently have no comment, but we can expect an announcement about their future in the coming months. In the meantime, they are focused on their season’s remaining shows: another revival of A.R. Gurney’s Sylvia with an all-new cast; Broadway’s recent Billie Holiday tribute, Lady Day at Emerson’s Bar & Grill, directed by Paul Castaneda of GOAT and starring Desiree Perez; Tracy Letts’ bawdy, bloody Killer Joe; and their traditional large-cast Christmas Carol. I’ll be in attendance, as long as I can still go home again.