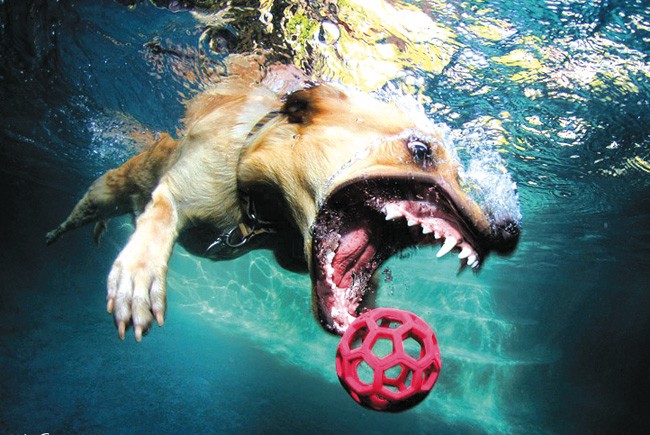 Even if you haven’t been inside an art gallery in years, you’ve probably seen Seth Casteel’s work. Earlier this year, people started posting his photo albums all over Facebook, and the images went viral. He takes vivid underwater dog portraits that capture both the physical impact on a dog’s physiology when its body explodes into a pool of water and (seemingly) on the dog’s brain when it goes into overdrive chasing a toy and suddenly finds itself flailing and trying to catch its dog-paddle balance without losing sight of the precious, precious ball. Don’t think LOLDogs – think high-end art portraiture that reminds you that man’s best friend is a pretty intense predator and athlete. That cute furball that sleeps on your couch is only one small part of his make-up.

Things we’ve learned from Casteel’s work: Dogs keep their eyes wide open underwater, and when they are diving after a toy in a pool, they look rather like nightmares. Eyes bulge, mouths gape, teeth bare, legs splay, bodies arc – dogs are transformed from the familiar to foreign in these exquisitely detailed and technically masterful portraits.

Casteel is coming to Orlando on March 18 to take photos at the University of Doglando, a training and day care facility in East Orlando. He’s not doing a show, but he is taking reservations for portraits, which will be shot in Doglando’s canine dock-diving pool. For $175, you get a sitting – well, a swim session – with Casteel, which includes two 5-by-7-inch prints of your choice. (You can purchase additional prints or files a la carte, as well.) Dog owners can reserve a spot by contacting Doglando at 407-574-3160 or emailing [email protected] Only dogs with an interest in the water and a passion for a tennis ball or toy are encouraged to attend – you want your underwater portrait to be intense, not full of fear and loathing.