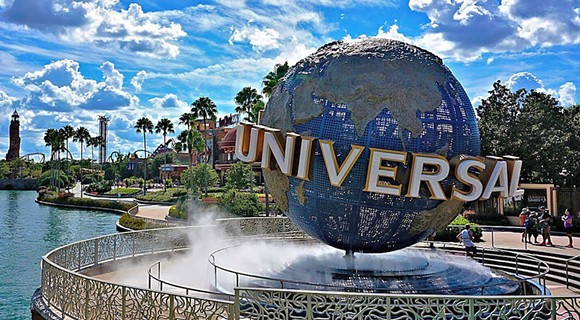 Photo via Universal Orlando
Studies have shown that crime rates increase around new hotels, bars, restaurants and other attractions. Now we know, thanks to new research, that crime rates actually double within a mile of Universal Studios Orlando.

Universal Orlando's "urban high-crime area designation" has been questioned in the past, but the new academic paper, published in Justice Quarterly, backs up the label. The study seems to go even further, indicating that theme parks themselves cause the increases in crime.

Researchers at four universities, including the University of Central Florida, University  of Texas at Dallas, and Australia’s Monash University, used census data to review crime rates near Universal, and found that crime rates increase as you get closer to the resort.

More than 4,500 census blocks in Central Florida were reviewed in the study, which examined more predictable crimes such as violence, property offenses and narcotics violations, over a nearly two-decade time period. Homicides and rape were not included, due their relative rarity and to account for spatial variations, a common practice in reporting.

Simply put, having more people increases the number of targets at risk for victimization.

This new report finds that crime within Orlando is concentrated in the downtown area and the southwest area, near Universal Orlando and International Drive. The area in downtown that saw the higher crime rates were lower-income communities like Paramore and the areas near recreational facilities like sports stadiums. The results were consistent across multiple modeling. The statistically significant correlation showed crime rates dropped on average 14 percent per kilometer, the further you moved away from Universal Orlando.

Dr. Alex Piquero of the University of Texas at Dallas is one of the researchers behind the study. He explained that while this study looked at Universal Orlando, due to readily available data in the city of Orlando, the results would likely hold up when looking at other theme parks.

"I’d suspect that there would be more similarities than differences," says Piquero. "Disney [World] in Orlando, for example, caters to adults, with the kinds of entertainment, food and alcohol options. So, I would anticipate that you would see similar findings at Disney."

He went on to say that parks which focus on different demographics may not find results as extreme as those found in Orlando. Universal Orlando is known for their adult-focused events, like Halloween Horror Nights and Mardi Gras. Parks, like Legoland or Sesame Place, which focus on younger demographics, could potentially see different results.

"Legoland, however, may be a different issue because you may have a different set of people going there," says Piquero. "In the end, however, what also matters significantly are the kinds of places really close to the theme park."

Orlando leads the nation in the number of fast-food restaurants per capita, and we have some of the highest concentrations of bars and lodging establishments in the country. Using the models developed for this new study, results showed that a single new lodging establishment, restaurant, or bar could cause an increase in crime rates by up to 19 percent.
Orlando is also home, of course, to some of the busiest theme parks in the world. Dr. Piquero noted that the results, while significant in Orlando, may also not be as extreme with the lower-attended regional parks.

Results showed that a single new lodging establishment, restaurant, or bar could cause an increase in crime rates by up to 19 percent.

"Nevertheless," says Piquero, "more work needs to be done with other theme parks of various sizes in different parts of the country to see if our results are generalizable." That's in part because the study could be summarized as "more people = more crime."

Tourists are frequent victims of crime. Dr. Piquero and his colleagues in the paper noted that previous research pointed to a number of causes for this, including diminished situational awareness, greater exposure to intoxicants, and an over-reliance on third-party guardianship, along with the higher probability of tourists carrying valuables or cash.

The increase in tourists, or any non-residential population, can skew census data.

"As a good example, take New York City. The resident population is not the same as the 'working' population, where many more people are in the city every day. The same is true for Orlando and the theme parks," explained Piquero.

Simply put, having more people increases the number of targets at risk for victimization. Piquero noted that the data used also makes it difficult to understand who the victims and offenders are, due to that information not being included in the data sets used for this study.

Despite the data showing that areas around theme parks can be dangerous, Piquero doesn’t want visitors to fear the theme parks. He believes tourists should enjoy themselves but be more aware of their surroundings.

"In the end, we do not want to leave people with the perception that going to theme parks is dangerous," says Piquero. "I do it regularly. But just because you go on vacation to let work or life troubles subside a bit, it does not mean that you can let your guard down."