Disney’s Polynesian Village Resort is undergoing one of the largest remodels in the resort’s 50-year history. Now we know more details on what to expect at the South Pacific-themed resort when it reopens later this year.

Images released by Disney Parks and shared on the company’s TikTok show a complete overhaul of the rooms, which previously featured dark wood tones and tropical touches. The new room switches out the generic tropical look for one that leans heavily on Disney’s Moana. One wall features a bright Moana print, while characters from the 2016 film can be seen throughout the room. Warm colors contrast with sand and wood tones throughout the room.

Throughout the space, there are bold touches from Moana. A large framed picture of the princess is centered on one wall, while a two-tone rendering of Maui can be found in the wallpaper. Hei Hei the Chicken makes an appearance near the coffee maker. 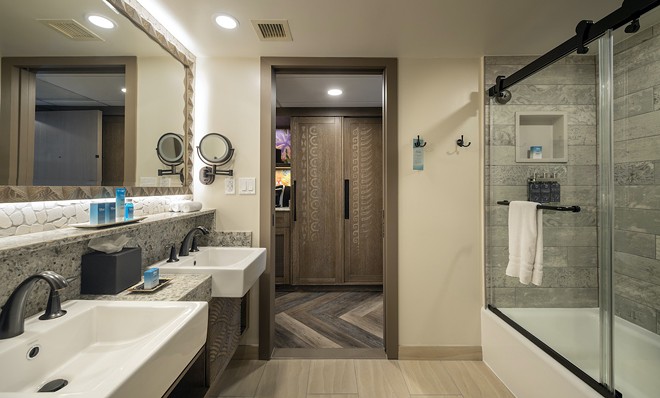 The move to lean so deeply into the characters is a bit of a surprise. In recent years many of the resort’s hotels have shifted away from such in-your-face character design. The move to downplay the intellectual properties that define the global entertainment company can also be seen in the updated World of Disney store at Disney Springs. The store’s former larger-than-life cartoon aesthetic was replaced by something that looks more like an Apple Store. 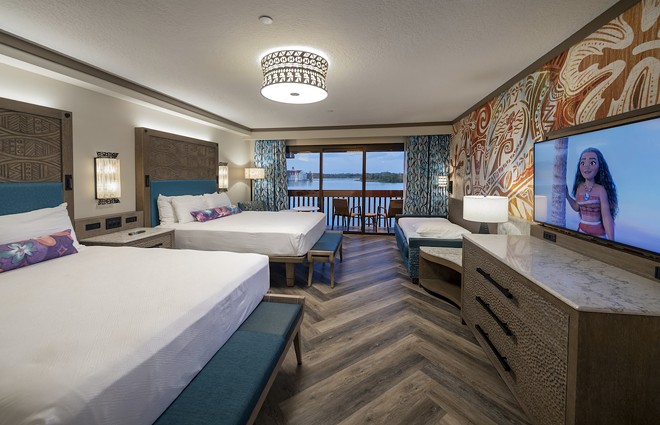 Disney previously channeled their franchises into heavily themed “Story Rooms” debuting in 2009. The first of those was themed to Pirates of the Caribbean. It features pirate decor, enhanced flooring, and themed furniture, including pirate-themed bed frames. Princess and the Frog-themed “Story Rooms” came online two years later and had a royal princess theme, including fiber-optic fireworks in the headboards. The Art of Animation also features similarly heavily themed rooms.

Both Universal Orlando and Legoland Florida have also found success with highly themed rooms. But at Disney World, the trend was quickly reversed as the resort moved toward a more generic look. 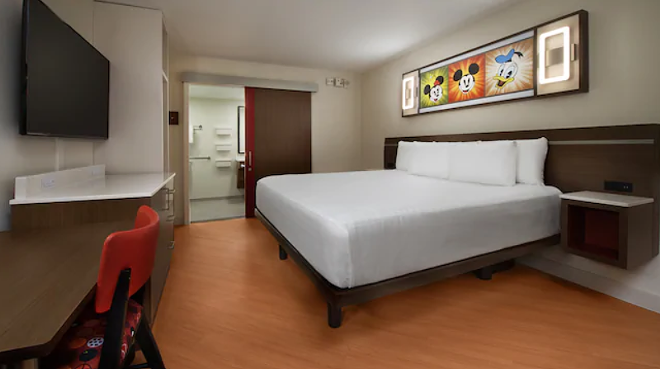 Coronado Springs, All-Star Movies, Pop Century, Port Orleans and other resorts have all been updated within the past few years or are currently undergoing updates. None of them feature characters as heavily as the new Polynesian rooms.

Instead, most of them look like a typical low- to mid-range hotel room with a single piece of Disney artwork framed on the wall. Those with Murphy beds feature a second piece of artwork found on the bed's backboard. The Port Orleans rooms also include curtains that have characters on them. The Pop Century and All-Star rooms, which feature a color scheme and flooring nearly identical to Motel 6’s newer rooms, look identical and include no apparent connection to the separate resort themes. Even the framed picture is the same at the two resorts.

Since 2009, Disney has tried to go after wealthier clientele and, in the process, has moved away from some of the simpler offerings that helped make the resort into the defining cultural juggernaut that it is today. A more generic but sophisticated style can be seen in many of the resort’s more recent additions. At Disney Springs, the McDonald’s made way for Vegas-style steakhouses, and old classics like Planet Hollywood had to remodel to fit in with the new higher-end atmosphere. The shift isn’t just found in Florida; Disney had proposed its own luxury resort at Disneyland (a project that is now canceled) and is remodeled a wing of one of its Paris hotels to give it the look of a "modern art gallery" filled with Marvel artwork.

At Disney World, the Gran Destino Tower at Coronado Springs is possibly the best example of this recent trend. The tower, its dining and entertainment, and its rooms all feature practically zero acknowledgments that it is located within the most recognizable resort destination on earth. Instead, the entire addition has a high-end Southwest spa feel.

According to industry insider Jim Hill, this was on purpose: The expansion was designed to appeal to high-ranking business travelers attending conferences at the resort. Convention hotels have a distinct luxury-meets-simplicity style that was clearly being replicated at Disney World. The lone exception would the updated rooms at Animal Kingdom Lodge, though again, no real acknowledgment of Disney’s vast library of intellectual properties are found in the rooms.

Business travelers and convention-goers are cash cows for hotels — in 2018, an average convention-goer in Orlando spent on average more than $1,100 per day. Since the mid-'90s, Disney has continued expanding and updating its convention centers while also marketing other on-site options for business events. But after a year of no business travel and the rise of virtual platforms, many expect that slice of the industry to never fully recover. That leaves resorts that were leaning on these travelers to find new options.

Disney typically takes years to approve projects, so it is unlikely the character-driven design of the new Polynesian rooms is in reaction to the decrease in business travelers. Still, it could be an acknowledgment that the company understands it must appeal to those who visit Disney World for Disney characters.

Rooms featuring the Incredibles were tested at the Contemporary Resort in 2019. That resort will undergo a soft-goods refurbishment starting in April. While this means no major updates to the room itself, it’s possible that at least some of those Incredibles flourishes seen in the test rooms will be included.

It’s still too early to tell if the Polynesian’s rooms will be the exception or the new trend at Disney World. As more non-Disney resorts open nearby, including on-site at the Swan Reserve and the more than half a dozen hotels in Flamingo Crossings, Disney must figure how it plans to differentiate itself.

The Polynesian Resort is scheduled to reopen this summer and is currently accepting reservations beginning in July.