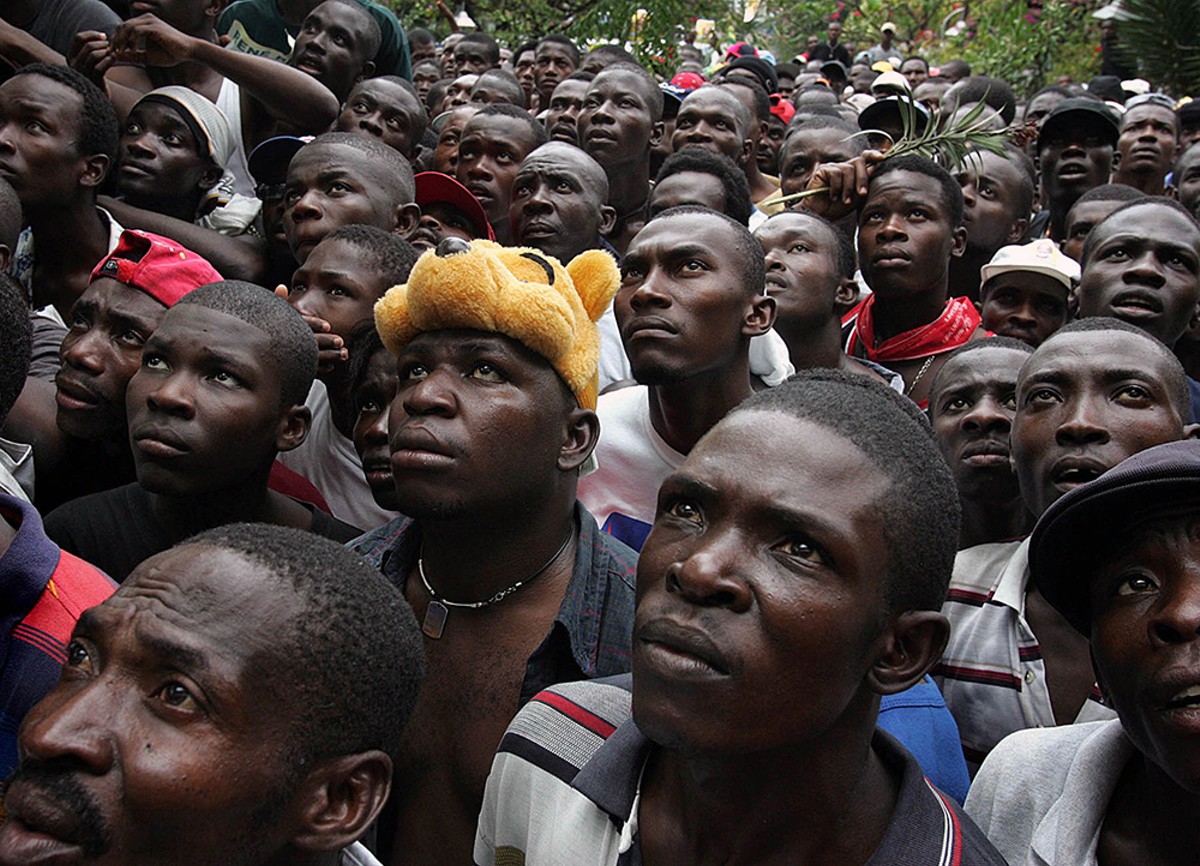 The Florida Prize in Contemporary Art has emerged as an important stage for the voices of Florida's contemporary artists, and it's significant that it's juried and curated here by the Orlando Museum of Art – it isn't a traveling show come to town, or a received corporate gift. It is therefore one of the most essential exhibitions in Central Florida annually. This year, 10 potent artists present (to varying degrees) deft social commentary via installation, video, sculpture, photography and good ol' painting. Miami-based, Peruvian-born artist William Cordova won the Florida Prize this year, with Miami-based, Haitian-born photojournalist Carl Juste taking the people's vote at the show's opening-night party.

What all the art has in common is a distressing (or distressed) take on the sour times we're living through. It's a chicken-and-egg problem trying to figure out whether the current craze for dystopian art has a causal or a coincidental correlation with this rotting world of ours, but, as near-future apocalypse prophet William Gibson noted in a recent interview with New York magazine, "Much of the planet's human population, today, lives in conditions that many inhabitants of North America would regard as dystopian. Quite a few citizens of the United States live under conditions that many people would regard as dystopian. Dystopia is not very evenly distributed."

It's not very evenly distributed throughout this show, either; but it's there, coursing through the veins. The Florida Prize exhibition closes Sunday, Aug. 20, so if you haven't already, you've got just a few weeks to witness it – if you dare.

Warnings. This year, I see cultural and social warnings everywhere in the art on exhibit. It's like we're all helplessly on some kind of horrid highway under construction, and the art here is like the "Caution – men working" signs telling us what's coming.

Well, this is the dourest, most severe group yet. The Florida Prize started as an explosion of color and texture and movement, and each year it has gotten more intellectual. Some of the works this year felt almost bloodless, though most claimed to engage with blood or conflict or pain.

Let's start with Rollins College art professor Dana Hargrove's looming wall. She described it to our reporter Esteban Meneses as a reference to borders, to Hadrian's Wall protecting England from Scotland, where she grew up.

The huge scrap-cardboard installation has a street quality about it, in contrast to the studio-born, crisp and colorful building blocks inside the gallery. Hargrove's cairns are exquisite, as always. They're very architectural. 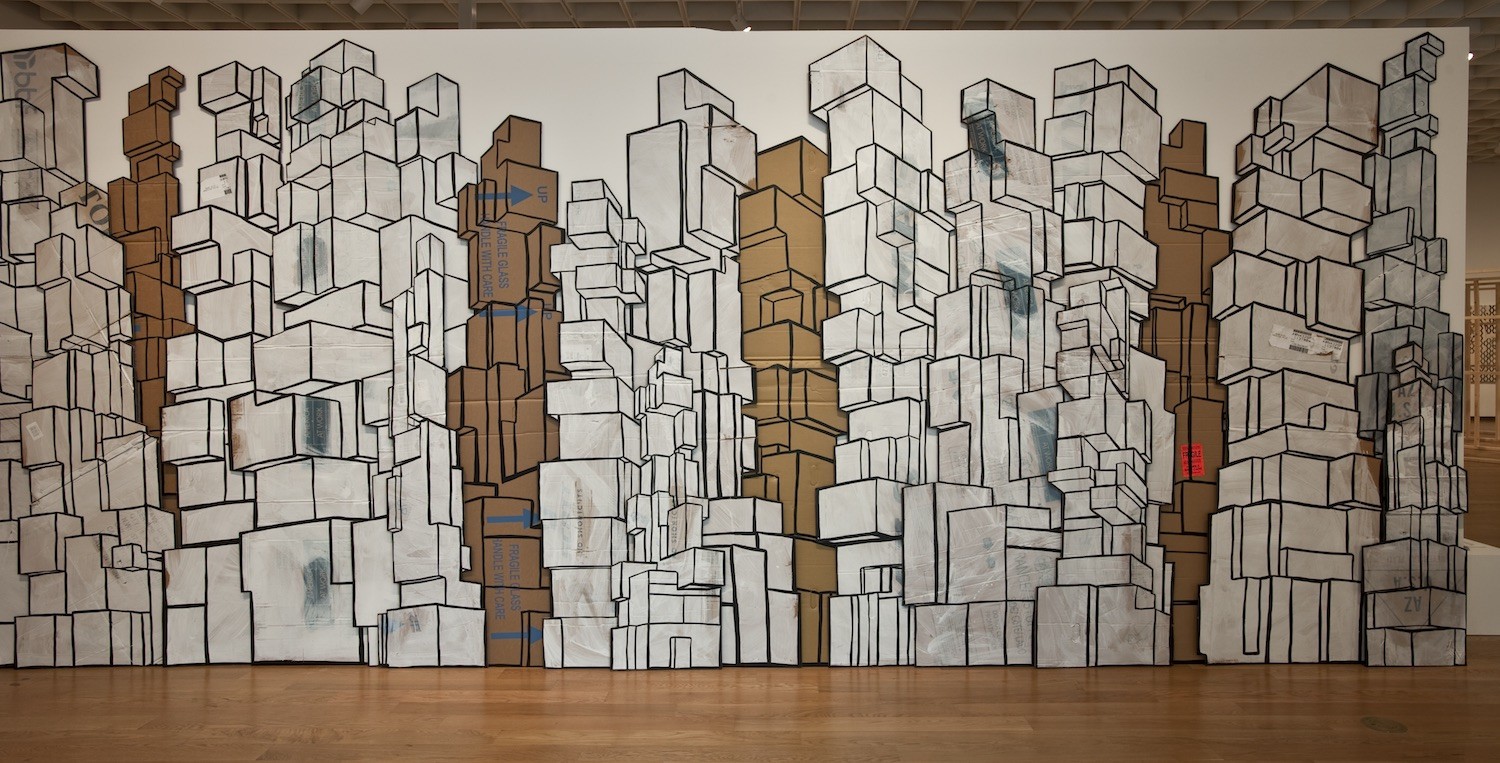 The rainbow cairns are very pretty and sharp and clean, but the battered cardboard wall has a grim quality that resonates with the rest of the show. Very good choice to install it as the opening piece.

Sharp-edged and clean also characterizes Chase Westfall's work. The Gainesville gallerist and artist juxtaposes clean, static grids over terrorists, human and animal body parts. The grid imprisons them. "Blue Barricade," for example, blocks the subject matter from the viewer. And then the "Replica of Syrian Fence" is quite clean and nice, until he explains it is ISIS' favorite execution fence. The effect is chilling. Or it could be. Things here are so pristine, there isn't a spot of blood on it, so he has to tell you what it is.

I particularly appreciated "Untitled (Memorial)," a delicate pendant of that fence that interrogates the fetishization of violence in religion's name – if it seems repugnant to wear a representation of that fence as jewelry, what does that say about crucifixes?

Iglesias' interactive drawing/projection will grow over time as visitors add to it, and there are various other interventions with the drawings – video, web.

Transforming the black-and-white information into a video and then, ultimately, into "yes" or "no" is an awful lot of conceptual process reminding me of so much of what we all do now: filter out all the noise in our presence – Facebook, TV, whatever – in order to make a decision.

Speaking of "an awful lot of conceptual" well, hoo-hah, what did you make of Miami artist Domingo Castillo's two video screens on poles, attended by a clutch of cheap office wheelie chairs?

One screen flips through classical nude portraits with cheeky slogans, the other a history of citrus promotion in Florida. The two screens were interesting spatially, subtly interactive. The right eye sees beautiful female forms, while the left eye sees oranges, commercial images. The brain mixes them together visually but the signal was drowned out. It was like we have more pressing matters than Florida's vanishing beauty right now. I don't know; if television is a cold medium, this was definitely on the cool side.