All the Tudor ladies 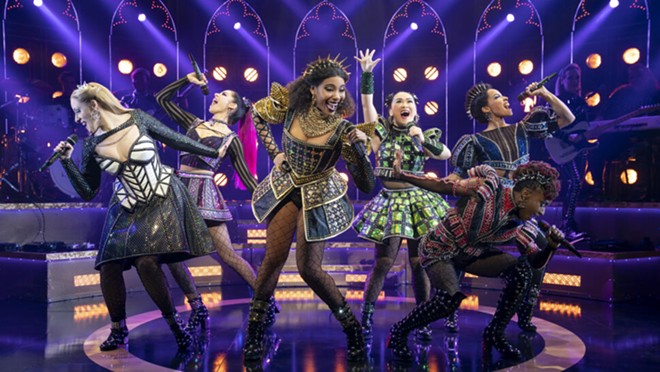 If Hamilton cracked open the door for contemporary musicals about historical figures featuring multi-ethnic casts, then Six has kicked that door open in stiletto boots and fiercely strutted through it. Few would have guessed that a pop song-cycle about the six wives of England’s King Henry VIII could successfully grow from the Edinburgh Fringe to the Great White Way — with stops on the West End and Norwegian cruise ships along the way — but Toby Marlow & Lucy Moss’ infectious soundtrack has become a worldwide phenomenon. (If you haven’t heard of it, ask any tween girl.)

The national touring production of Six visiting the Dr. Phillips Center this week shows Orlando audiences what all the fuss is about.

Despite only having a single, simple set (designed by Emma Bailey, dynamically lit by Tim Deiling), this tightly paced 80-minute production is a feast for the eyes, thanks to Moss and Jamie Armitage’s polished direction, Carrie-Anne Ingrouille’s MTV-ready choreography, and costumer Gabriella Slade’s rhinestone-studded corsets.

Moreover, it’s a terrific showcase for the powerhouse vocal talents of the show’s six co-starring queens, who are backed by a blistering all-female band. It’s difficult to pick a favorite performer among this superb sextet, which included dance captain Cassie Silva as Katherine Howard on opening night (understudying for Didi Romero), along with Gabriela Carrillo as Catherine Parr and Storm Lever as an Avril Lavigne-inspired Anne Boleyn.

But Khaila Wilcoxon’s Beyoncé-style Catherine of Aragon stole the show, as did Olivia Donalson as a Rihanna-esqe Anne of Cleves, and Orlando native Jasmine Forsberg (as Jane Seymour) brought the house down belting the evening’s best ballad.

When a show like Six is able to draw a new audience to the theater, deliver catchy tunes with witty lyrics, and still get you out the door before 10 p.m., it seems petty for me to nitpick that the “most abused ex-wife” framing story that supposedly ties the show together is hastily resolved, or that the finale’s uplifting feminism feels superficial.

But as a middle-aged white guy, I’m practically the opposite of this show’s target demographic. Just listen to the devoted fans shrieking at every “What’s up, Orlando?” shouted from the stage, and watch them lining up afterwards for merchandise, and you’ll know these Six have struck their mark.