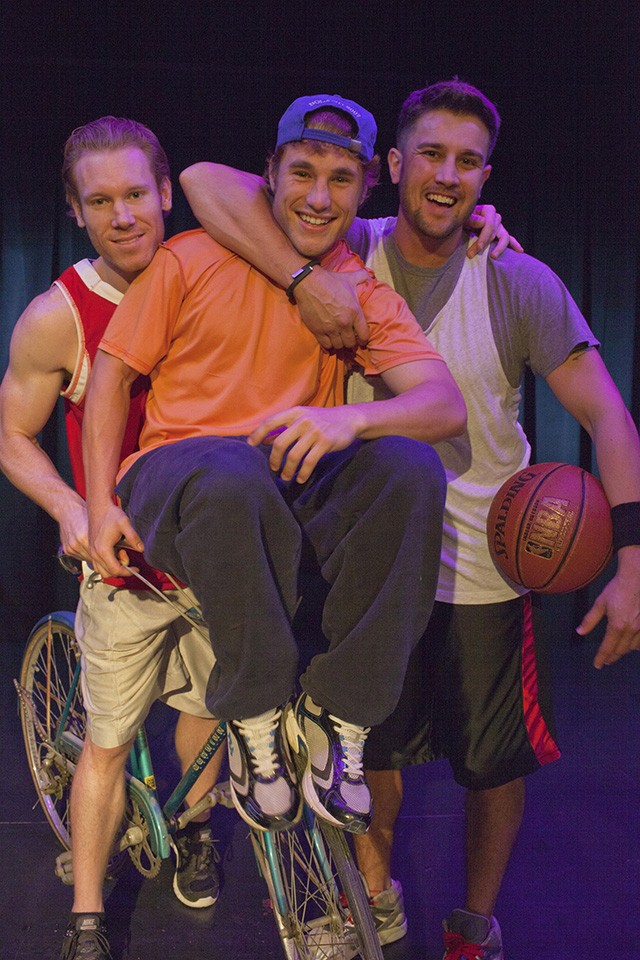 Two weeks ago, Live Active Cultures talked with one of the stars of The Book of Mormon, and last week's column came to you from Orlando Shakes' PlayFest. In this issue, we split the difference with the debut of a brand-new play featuring friendly folks from Utah who cross a continent being really effing nice to everybody. After its recent pre-Manhattan presentation of Disenchanted, downtown's Abbey theater is hosting the world premiere production of True Fans, which runs through Nov. 24. I spoke with London-based playwright Bill Rosenfield a few days before the show's opening on Nov. 15 and learned about the long, strange trips taken by both the author and his true-life characters.

True Fans is inspired by a 1999 documentary of the same name. Filmmaker

Dan Austin chronicled the 100-day bicycle pilgrimage he took with his brother Jared and their friend Clint Ewell from Venice Beach, Calif., to the Basketball Hall of Fame in Springfield, Mass. This trio of Utah Jazz superfans survived on $10 a day and carried a basketball signed by American "heroes" (all portrayed in the play by the same three actors) they met along the way, which they hoped to enshrine in the hall. Austin's film, which he later adapted into a book, was a surprise hit at several film festivals and has a small cult following. (More about Austin in this week's Know It All.)

Rosenfield discovered the movie more than five years ago during an outdoor screening at the touring Mountainfilm Festival in Watercolor, Fla., finding it "so quirky, and funny, and life-affirming … my brain opened up to it." Upon returning home to England, he purchased a DVD copy online and contacted Austin via email, eventually securing the stage adaptation rights. He says he and Austin went back and forth in discussions over the script: "Dan is a very trusting guy … I had to be very careful not to invent things that would be unfaithful to his themes. [Some prospective producers] asked for them to swear more or take drugs – I didn't want to sully his reputation. But it isn't a line-by-line approval process; as a filmmaker he knows that [some] liberties have to be taken."

In this loose adaptation, those liberties are extensive in both dialogue ("I think there is one line from the film that is in the play") and in plot points: A passing reference to a schoolteacher on screen turns into a principal incident on stage, while a key sequence involving Calvin Klein is eliminated entirely. "Friends of mine [who have seen both] are amazed that I saw the movie, and that I saw my play in that movie. But it's the same spirit, and that's really what I was going for." In transforming it for the stage, Rosenfield has bulked up the running time from a 41-minute short to a 105-minute two-act. "The film is really a springboard for the play, and that's why I'm careful to have the credit line ‘inspired by the documentary film.'"

Despite his affection for the film, Rosenfield's "dirty little secret" is that "I'm not a basketball person, and I'm not a bicycle person. For me the play is very much like The Wizard of Oz; it's a journey play about self-discovery. … What I responded to [was] the idea of having a passion, learning from it and following it." Following his own passion has taken Rosenfield on a journey through the best of Broadway – a freelance gig coordinating CD reissue packaging turned into a 20-plus-year career as an executive producer overseeing the creation of more than 65 cast albums, including Assassins, The Who's Tommy and the recent revival of Hair. "I was very successful in choosing certain hit shows very early on and committing to them, and avoiding overhyped shows [that] look like they couldn't miss but always do. … The shows that I'm proudest of are the ones that wouldn't have gotten recorded otherwise, [like] Once on This Island [and] Songs for a New World."

But despite his wealth of experience, realizing that he was "the oldest guy in the room" in a youth-oriented industry inspired Rosenfield, who had written scripts on the side for several years, to formally transition careers in 2011. "I'm going to leave this party before I stop being invited," he says he thought. "The only way for me to be taken seriously as a playwright is to say, ‘I'm not doing records anymore, I'm a playwright.'" Even so, he has no aspirations of going back to Broadway with the show. "My goal is to sell the stock and amateur rights. I don't view the play as a New York play; I view it as a regional and community theater play, because it's so minimal in its needs and fairly inexpensive to produce."

"It's an unusual story to have on stage, and I think that the way we're telling it is unusual and fun," Rosenfield concludes, comparing the play's layering of laughs with "something a little bit deeper" to a certain musical. "People should walk out of True Fans going, ‘Oh, it's just like The Book of Mormon, with less cursing!'"