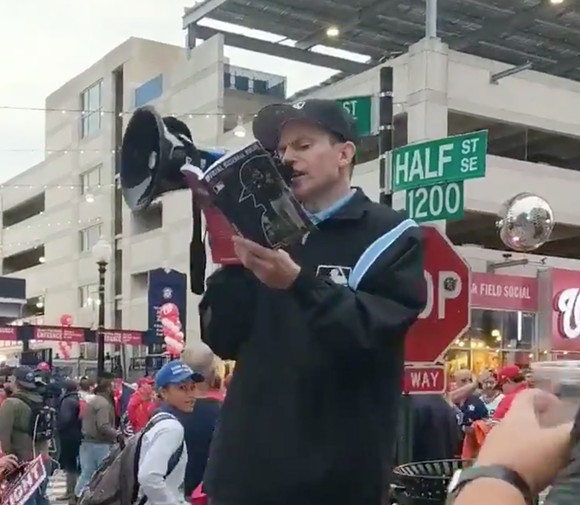 Screenshot via Kathy @tittergrrl/Twitter
Performance artist and onetime Orlando resident Brian Feldman is again making waves for his public theatrics, this time in Washington, D.C., in honor of the World Series.

Feldman, whose lighthearted performances are often surprisingly emotional, announced on Facebook his newest act would be called "You’re Out! Brian Feldman Reads the MLB 2019 Official Baseball Rules Book." Staged on Friday in front of Nationals Stadium, the event was apparently a hit. Video of Feldman shouting the rules of baseball through a megaphone – and over the voices of street evangelicals – is now going viral on Twitter.


MVP so far. This guy reading the MLB Handbook to combat the awful religious proselytizers who show up for big games. They looked so annoyed and confused. #WorldSeries #Nats #FINISHTHEFIGHT pic.twitter.com/QpfhZf9EYf

This performance comes almost exactly one year after his 2018 "Wawa Shabbawa," staged at an Orlando Wawa and sponsored by OneTable, a national nonprofit which makes Shabbat dinner more accessible for millennials.

In 2012, Feldman moved from Orlando to D.C., where he continues to stage performance-art pieces in the District, when he isn't traveling or returning to Orlando. Feldman's move to D.C. didn't come without its challenges. Over a weekend in 2016, Feldman was mugged while getting off a bus with his bike. Beaten and kicked until he was unconscious, he recovered in a D.C. hospital from a concussion, broken nose and broken vertebrae. Friends and fans rallied around him with a GoFundMe.

In February of this year, Feldman returned to the City Beautiful to stage a greatest-hits of his past performances, including "#txtshow," in which Feldman reads aloud from a stage anything texted to his cell phone by members of the gathered audience. That piece, originally staged 10 years prior, was but one of his many delightful spectacles before leaving the city.

In 2009, to point out how dangerous Orange County's roads are for pedestrians, he staged "Pedestrian, or Walking: Impossible," in which he crossed 12 of the region's most dangerous intersections.

In 2010, to prove how asinine Florida's laws forbidding gay marriage were, he performed "Brian Feldman Marries Anybody," in which he promised to legally marry any woman who showed up at the Orange County Courthouse at a specific date and time. There, he married Hannah Miller, before the two annulled the union in January of 2011.

In 2011, he created a performance piece called "24 Hour Embrace," in which he and his father engaged in a full-body hug for 24 hours straight. On Mother's Day 2015, Feldman’s 24 Minute Embrace showcased the artist in a 24-minute hug with his mother, Marilyn Wattman-Feldman, on the Seneff Arts Plaza lawn in front of the Dr. Phillips Center for the Performing Arts – an act which they then took on the road to D.C. and Philadelphia.

If those sound trivial and silly, well, you just have to be there to understand, and that's the point. It's gratifying to know Feldman, who this publication once called "an indomitable artistic spirit with a mind rooted squarely in the civic good," is still making an impact in the nation's capitol.

You can follow Feldman's performances and find out about his next events on his Facebook page.
Stay on top of Orlando news and views. Sign up for our weekly Headlines newsletter.