Elliot, a Soldier's Fugue overlaps time and words to create, as the title announces, a fugue — a polyphonic composition. Quiara Alegría Hudes has degrees in playwriting and music, which may explain how she masterfully weaves poetry and monologues (and precious little dialogue) to tell the story of three generations of a Puerto Rican family who have served the U.S. military in times of war.

A nominee for a 2007 Pulitzer Prize, Hudes' drama is largely written in a passive narrative voice that can be difficult for actors to make active and proves to be a challenge for director Patrick Braillard and his cast at Mad Cow Theatre. The script, more often than not, leaves the cast static and, despite obvious passion for the material, the actors ultimately come across as detached from what they are saying. Detachment isn't what you hope for when experiencing live theater, particularly when the subject matter is foremost in the minds of the public: war.

Jenny Weaver, for example, is a skilled actress, but often in this show doesn't appear to relate to the material, especially when confronted with a rambling monologue about gardening. Weaver relies on a stock of facial gestures that seem to be what she thinks is the proper reaction, as opposed to anything she is actually feeling.

As the titular Elliot, Michael Kutner delivers the strongest performance in the cast of four (which also includes Benjamin Rush and Dave Heuvel), but his portrayal of this hardened, cocky Marine is as clichéd as it is bold. The list of predictables doesn't stop there: Scenic designer Alan Bruun's set incorporates a backdrop of blue camouflage to serve as the sky; the actors perform on a platform with rounded corners reminiscent of a dog tag. James B. Hemphill even uses a camouflage gobo in his lighting design.

Hudes succeeds in illustrating the simple point that Hispanics from the U.S. have fought in Korea, Vietnam and continue to do so in Iraq. She compares and contrasts the three wars and how the different generations react to the conflicts. Hudes also reveals the irony of similar events happening in each era. In the end, though, the playwright's words don't give us enough to capture our hearts.

In addition to her Pulitzer nomination, Hudes received a 2008 Tony nomination for the book to the much-lauded In the Heights; she's clearly becoming an important voice in contemporary theater. Elliot, however, will likely become a forgotten part of her canon.

It takes courage rare to Orlando to present a play with an unpopular subject matter — particularly in the face of current economy — and for that Mad Cow Theatre should be commended. Unfortunately, Elliot is not the visceral indictment of the Iraq War that one would hope. 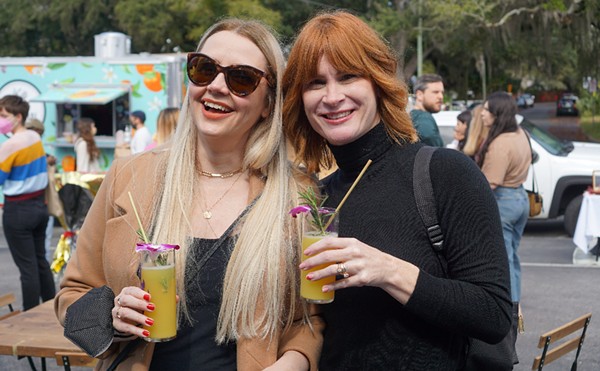