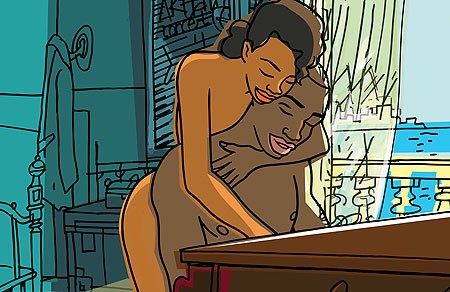 Hey, Oscar watchers, welcome back! If you listen to the chatter, 2011 was a depressing year for animation films. Pixar screwed the pooch, as expected, with Cars 2, Rio was a thing (I've seen it and I can barely remember it) and Happy Feet 2 ... well, I kinda liked that one. Actually, to this traditionally animation-harrumphing critic, 2011 was just fine, thank you very much. The Adventures of Tintin did its job efficiently, a couple of the nominees below tickled me and if it didn't clock in at only a fucking HOUR, Disney's Winnie the Pooh would've been the frontrunner, in my opinion. What a delightful, respectful, sing-along throwback that one was! And say what you will about her, but Zooey Deschanel was straight born to provide a Pooh soundtrack.

But alas, critics don't vote for these things. They really don't! The people that make them do. Here's what they liked:

Right off the bat, I haven't seen it, and neither have most critics. Sigh. Let's go to one of the lucky few, Leba Hertz at the San Francisco Chronicle! "A charming little French animation (not suitable for very young children,) directed by Alain Gagnol and Jean-Loup Felicioli ... [with] animation that sort of combines folksy and expressionist art." (psst - I don't think she's seen it, either) Will it win? Nope.

Again, I haven't seen it. Let's go to Andrew O'Hehir at Salon! "Balancing the tropical primary colors of pre-revolutionary Cuba with a wintry, neon-flavored vision of bebop-era Manhattan, Chico & Rita is an ecstatic musical and visual celebration, taking its cues from Gauguin and Picasso in one direction, from Dizzy Gillespie and Tito Puente in another." Sounds awesome. But no.

Technically the aesthetic pick of the litter, Panda 2 was a marvel to take in, all fluid, forward motion and, despite being years into an overstayed welcome, career-wise, Jack Black's comedic verve. So why wasn't that enough for me? I think it boils down to the DreamWorks animation scripting process, which seems designed specifically to beat any surprise out of the plot and replace that with stale pop-culture references. It just leaves me cold, even with the best kind of window dressing. No.

If I'm being totally honest, I giggled throughout. Something about Antonio Banderas voicing a kitty cat (as opposed to a bee) tickles my inner (and, frankly, outer) Pillsbury. The action flows nicely, the characters mostly work and Banderas is a vocal force to be reckoned with. But the actual story lacked in cohesion and momentum and Zach Galifianakis as Humpty Dumpty provided about as much zest as a Perkins server picking up his last paycheck before hopping on a bus to military school. Still, hee hee, kitty. But no.

Verbinski is the biggest name in the category and will likely be rewarded for returning to kid-friendly fare (one of his first outings was the surprisingly decent Mousehunt), but while the picture looked amazing – such detail! – Johnny Depp's voice work did little for me, as did the cowboy-Chinatown arc. Plus, let's be honest: We're all just waiting for The Lone Ranger, right? Right? Anyone?