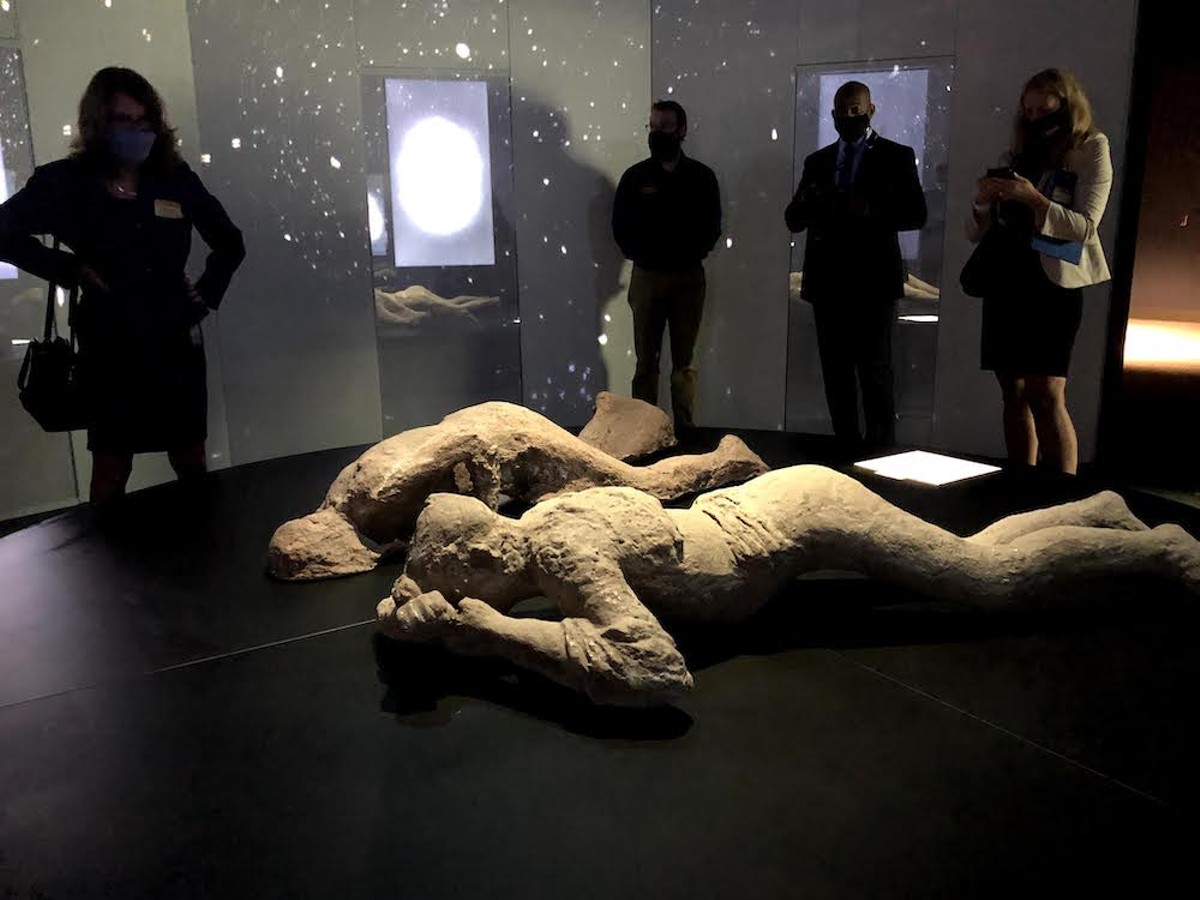 In their time, they were admired as one of the most advanced societies on Earth. But when undeniable warnings of destruction were delivered, a surprising number decided to dig in their heels, seemingly assured of their immunity from the inevitable. And so, despite their apparent sophistication, they embraced their extinction, and their agonies were immortalized as eternal warnings against inaction in the face of Armageddon.

The above sentences someday could easily serve as an epitaph for America, as our COVID cases continue to increase – or even civilization in general, in light of the accelerating climate crisis. But for right now, I'm talking about the ancient inhabitants of Pompeii, whose remarkable achievements and tragic devastation are dramatically documented in a newly opened traveling exhibit at Orlando Science Center.

Pompeii: The Immortal City was originally scheduled to debut at OSC back in June, as the third and final stop on the Italian artifacts' tour of the United States. Like every other cultural event, it had to be postponed by the pandemic, but rather than cancel the exhibit entirely, OSC has made it the centerpiece of its socially distanced fall/winter season. Although the Center has been reopened to guests for the past several months, I personally hadn't set foot inside it – or any other Loch Haven museum – in nearly half a year, prior to attending last week's media preview of Pompeii, which is open to the public now through Jan. 24, 2021.

It's apparent OSC has taken tips from the local theme parks, because they employ similar forehead temperature checks, face-mask mandates and 6-foot spacing reminders on the floor as Universal and Disney. For Pompeii, they've gone even further and issued time-specific entry tickets, to avoid overcrowding in the 10,000-square-foot gallery. I admit that I did hesitate to interact with the exhibit's touchscreen displays (as interesting as their virtual archaeological excavations looked) because there were no sanitizing wipes readily available. Otherwise, I felt as comfortable touring OSC as I do visiting the major attractions, which is to say "safer than at the supermarket."

Pompeii's presence in Orlando was made possible in large part by Orange County, which granted OSC a total of $798,000 from the "blockbuster fund," which directs Tourist Development Tax money into large-scale cultural events that will attract visitors from outside the area. (Creative City Project's Immerse festival, which was canceled for 2020, is the blockbuster fund's other chief recipient; the bulk of TDT money goes toward the Orange County Convention Center's debt and operations, as well as tourism promotion and arts.)

Orange County Arts and Cultural Affairs director Terry Olson says OSC's exhibit "is an important thing that people from farther away will want to come [to]. There have been other Pompeii exhibits at other places, but none of them have had this amount of artifacts that are actually from Pompeii [and] have never been outside of it before."

During Pompeii's media preview on Oct. 23, Orange County Mayor Jerry Demings said, "I can tell you that the Board of County Commission wants to ensure that our community remains a vibrant community; that we do invest in the arts." However, he acknowledges that the TDT revenues that arts funding relies on have "declined significantly" from $30 million a month to less than $5 million.

"I believe that because of the resiliency of our community, we will recover, and we will see those tourist development tax revenues begin to increase," says Demings, "albeit my best guesstimate is that it will likely be second quarter of 2021, because from the convention side of things ... we have conventions now that have canceled or rescheduled – some 97 of them – into January and February of next year."

Visitors begin their journey through OSC's exhibit with a CircleVision 360-style video depicting the development and destruction of Pompeii through computer graphics and surround-sound effects. After that Epcot-esque introduction, visitors wander at their leisure through galleries detailing the city's grandeur, from its sky-scraping construction cranes (powered by giant human gerbil wheels) to prodigious wine-producing capabilities. While Pompeii's advancements in glass-making and surgery must have seemed like science fiction in its own era, I was most fascinated by the exhibit's more prosaic artifacts, like a blackened loaf of 2,000-year-old bread.

It isn't until immediately before the exhibit's exit that you confront Pompeii's legacy of death, in the form of two prone figures – one identified as a slave, the other a possibly pregnant woman – lying face-down on a circular platform, bathed in ethereal music and drifting digital ash. These castings are modern copies of the famous 19th-century figures, and their postures of obvious pain evoke the same empathy as the originals I saw in Italy decades ago. For all their society's science and culture, they failed to save themselves, and ended up frozen for all time. Will history say the same about us? Hopefully we'll all have a clearer answer to that question after next Tuesday.