Orlando Rep. Anna Eskamani is just one of the voices in Jaimz Dillman’s production of ‘The Vagina Monologues’

When Eve Ensler's The Vagina Monologues debuted off-off-Broadway in 1996, the titillating title alone was enough to brand it as edgy political theater. A quarter-century later, after being name-checked on Sex and the City and performed at countless celebrity fundraisers, one would hope our society has evolved enough that a collection of speeches about female body parts should no longer seem so taboo. But take one look at the current conniption over Pixar's Turning Red for daring to depict menstruation, and you'll know this frank discussion of everything gynocentric is still both dangerous and necessary.

Since that's the case, the end of Women's History Month seems the perfect time for director Jaimz Dillman's star-studded live readings of The Vagina Monologues at Timucua Arts Foundation. (The 8 p.m. show on Saturday, March 26, is already sold out; check eventbrite.com for tickets to the 10 p.m. show.)

Dillman, a Sanford native who is best known as founder of the Corsets & Cuties burlesque troupe, began her performing career at SAK Comedy Lab, and has worked at all three major theme park resorts as well as fan conventions like Spooky Empire. Along the way, she put her improvisational hosting skills to service for two prior Vagina Monologues fundraisers produced by friends, and decided now was the time to mount her own.

"Coming out of COVID, I realized that we all needed to stretch our performing legs a little bit and get back into the swing of things, and I reflected on some experiences I had in the past and things that I wanted to re-create or give back to the community. And The Vagina Monologues, when I performed it, was such an empowering and powerful piece," says Dillman.

"The two different times that I performed it, I was in two different situations: The first time I was a young single young mother, and the second time, I was newly married. So you know, at different times in your life, different pieces are poignant to you in different ways, and I wanted to bring that back to the production."

To bring Ensler's words — which cover topics from tampons and douches to wartime rape — to life, Dillman eschewed auditions and instead turned to her personal contacts (or as she says, "beautiful people and beautiful humans that are personally friends of mine") to assemble a who's-who of Orlando actresses, including Tymisha Harris (Josephine), Nicole Dupre (Opera del Sol), Summer Aiello (Universal Orlando), Sarah Lee Dobbs (Orlando Fringe Critic's Award) and a dozen more.

"I basically reached out to anybody that I could think of that would voice a specific monologue in that piece, and I could hear their voices coming through as I was reading it," says Dillman, whose show is financially sponsored by Carla Stanton with Mainframe Real Estate; proceeds will support One Heart Women and Children (oneheartorlando.org). "And everyone said yes, so it's kind of blown my mind how it's all coming together."

One name on the cast list that blew my mind was State Rep. Anna V. Eskamani, a rising star in the Florida Democratic Party who successfully flipped House District 47 in her 2018 campaign, and earned a following by fighting for citizens against Florida's byzantine unemployment system during the initial pandemic shutdown. "I have been a longtime fan of The Vagina Monologues and when asked to participate to support One Heart for Women and Children there was no way I could say no!" said Eskamani in an email interview. 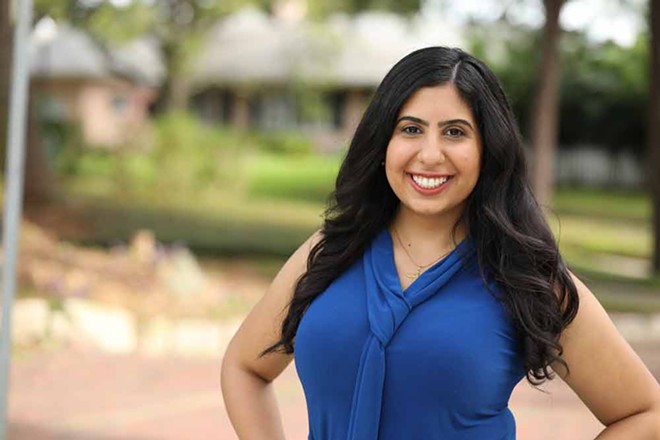 Although Eskamani has no previous on-stage experience, she did technical theater in high school, and calls herself "a lover and supporter of the arts." To prepare for her theatrical debut, she says she's been reading her lines and practicing on the way to and from Tallahassee during the legislative session. She's performing the monologue "Hair," which she says is one "a lot of people can relate to. There are such narrow beauty standards that people — especially women — feel pressure to fit into. 'Hair' challenges that standard and reminds folks of why you should love the hair on your body!"

Sadly, a shadow hangs over this show due to its sudden relocation from its originally scheduled venue at Häos on Church Street. This production was one of several local shows to pull out of Häos last week after the sudden departure of entertainment director Blue Star and her Blue LaLa Entertainment, which follows the property's purchase by developer (and recent DeSantis appointee to the State University Board of Governors) Craig Mateer.

"I am so proud of this team of beautiful humans that we have met along the way in the last 2 years," Blue wrote in a posted statement. "We are so proud we gave the [LGBTQIA+] community a safe space and created a concept that was thoughtful and fresh. ... Please find us elevating Orlando to the next level because that's what we do."

Even that cloud had a silver lining when Timucua swiftly stepped in to offer their space and "ended up being our savior," as Dillman says. Still, it's clear that a quarter-century after Ensler first spoke out, strong women still face an uphill struggle. If that pisses you off, here's Rep. Eskamani's parting advice: "Get involved; don't shrink in your advocacy or presence, get bigger and louder! Our state is moving in the complete opposite direction of progress, from the 'Don't Say Gay' Bill to the 15-week abortion ban. We need to be united in our opposition to these dangerous policies and stand together, loudly and proudly!"