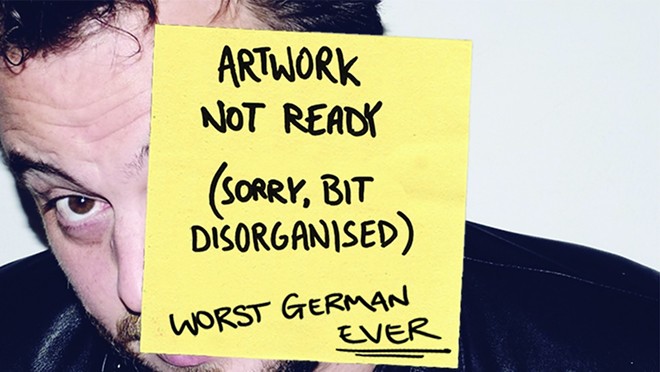 Last May, standup comic Paco Erhard earned explosive laughter from Orlando Fringe audiences with 5-Step Guide to Being German, which I called “a fast-paced hour of international humor.” For his follow-up, Paco Erhard: Worst. German. Ever., Erhard focuses his politically incorrect wit on his newly adopted home of America, and the results are even more chaotically hilarious, provided you fall left of center on the political spectrum.

Like a dirty-mouthed DeTocqueville dressed in a Mickey Mouse-meets-Misfits T-shirt, Erhard shares incisively absurd observations generated by his journeys across the USA, taking merciless aim at our health care, gun laws, xenophobia and general geographic ignorance. If jokes lampooning fascists, poop pornography or organized religion disturb your sensibilities, skip this show; anyone with a liberal sense of humor (or stiff libation) will likely be laughing too loud to take offense.

A few punchlines may get lost in translation, but Paco’s propulsive pace and infectious inquisitiveness propel his set past any uneven patches. This new show is still a work in progress, and Erhard dispels any stereotypes of German efficiency with his disorganized piles of notes littering the stage, so I’m looking forward to his production returning with more polish at May’s festival.

The only element that’s missing is any information on how Erhard successfully navigated the bureaucracy to become a legal U.S. resident; with immigration increasingly in the headlines, there has to be a story or nine (not nein) to mine from that material.