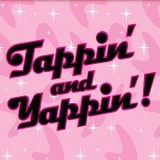 “No one wants to hear songs and stories from an old has-been,” Cindy Starr’s agent tells her toward the end of Tappin’ and Yappin’! While Starr may be a has-been, Joy Andersen, who plays Starr, certainly isn’t, as she shows off some decent acting chops, satisfactory singing and competent dancing during her 45-minute show. But because Anderson, unlike the character she plays, never was a celebrity (make-believe or otherwise), we’re mostly left wondering “what’s the point?” while watching a repetitive and unimpressive cabaret concoction.

The fictional Starr is essentially an amalgamation of real personalities from the world of film, television, lounge circuit and dance, especially tap legend Ann Miller. Starr began as a chorus girl in 1932, moved on to low-level fame with Jimmy Sparkles and the Sparklers, got her movie break with Hoofers from Hollywood, and then finally struck gold with the song “Ya Gotta Have Gams,” before sinking into the world of sub-par variety shows and Christmas specials. Hey, at least the latter gave her the chance to croon such memorable numbers as “Give Me a Big, Big Package for Christmas.”

Written by John B. deHaas, directed by Andrea Canny and choreographed by Andersen herself, with live electric piano accompaniment by deHaas (as Johnnie Ivories, in an amusing, perfectly understated role), Tappin’ and Yappin’! takes us through those career highs and lows, but never delivers enough originality or laughs to make up for the fact that, in the end, we don’t really care what happens to Starr. Making it more tedious at the performance I saw were three instances of audience involvement that fell flat, including one involving yours truly. (Trust me, no one comes to Fringe to see or hear me.)

You may enjoy the innocent fun of Tappin’ and Yappin’!, and Anderson was admittedly well received at the show I attended. But when all is sang and done, this tune-filled, slightly campy musical comedy is lacking a raison d'être.