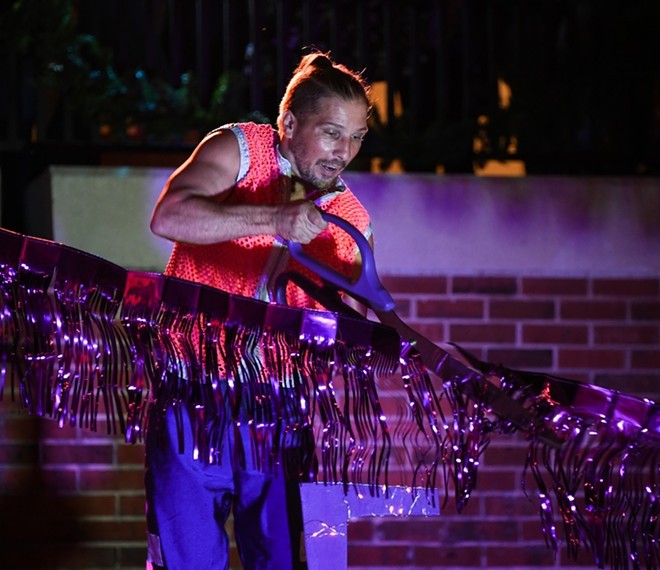 The festivities kicked off Wednesday evening with a ceremonial ribbon-cutting conducted by a chair-stacking acrobat from WeFlip, followed by previews of the 20 shows participating in the Mini-Fest.

Over the following four days, Mini-Fest and the new ArtSpace received a warm reception from patrons, with outgoing producer Lindsay Taylor reporting that they reached their total ticket sales projections by Saturday night. And visiting artists raved about Orlando, especially our expanding downtown food scene, although not so much about the frigid weather.

The 2023 Fringe Winter Mini-Fest wrapped up with a brief awards ceremony, where Paris Crayton III’s Bloodline came away the big winner, with both the Staff Pick award and the Critic’s Choice (selected by yours truly). This deeply moving one-man show puts the playwright in the shoes of both his paternal grandfather Paris and his father Paris Jr., as he bravely traces the impact of their traumas on his own life with remarkable empathy for their flaws.

Righteous anger at racism rubs up against rebellious explorations of sexuality, all wrapped up in Crayton’s carefully crafted prose, which is both achingly poetic and authentically raw. Director Dennis Neal helps Crayton clearly delineate the many time and character jumps of his story using little more than a hat and some stools, skillfully shifting his physicality and vocal cadences instead of employing set changes. Perhaps most importantly, Bloodline provides an all-too-rare onstage example of positive Black masculine affection, which is affecting to watch regardless of your race or gender.

In addition, a Critics’ Choice award — selected by both myself and the Orlando Sentinel’s Matt Palm from the shows we both saw — was presented to Jon Patterson’s How I Met My Mother (read my full review).

Nods also went to Erika Kate MacDonald’s The Barn Identity, which took home the Heartstring Award, and Bonnie He’s A Terrible Show for Terrible People was named “Fringiest of the Fringe.” Physical comedy is typically dominated by white dudes, so He’s Hello Kitty-accessorized, coquettish character is a breath of fresh air, as she acrobatically assaults unwitting audience volunteers in her endearing search for love. I appreciated how He’s genital-centric humor manages to be puerile without being explicit ... that is, right up until the gag-inducing gross-out finale vigorously leaps across every line of taste and decency.

Finally, the Patrons’ Pick went to VarieTease’s On the Move, which was inspired by Blue Star’s saga of moving into and then out of HAOS across the street. VarieTease: Genesis, that show’s sequel, premieres Jan. 26-29 as the first mainstage production in Fringe ArtSpace’s inaugural season.