A can’t-miss show for devotees of the maestro, thanks to this cast of big voices. 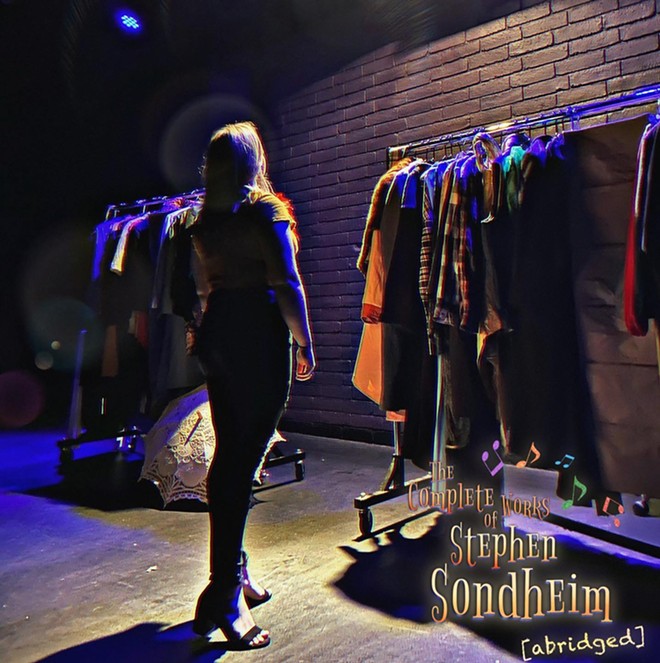 image via the production/Facebook
Are you the type of musical theater obsessive who knows Patti LuPone’s personal policy on mid-show photos, laughs with recognition at the mere mention of the name “Bernadette” (no “Peters” required) and is still feeling salty about Jerry Herman’s snarky 1984 Tony Award acceptance speech? Then have I got a Fringe show for you! Writer-performer Brian Jager (who is also behind The Spider Queen) and co-writer Jarrett Poore join with Rachel Hope Ihasz, and Marissa Volpe to lovingly lampoon Stephen Sondheim, the late great master of intricate lyrics and unhummable tunes.

Starting with some brief biographical background, the quartet buoyantly launch into a mash-up of Sondheim’s early lyrical work on West Side Story and Gypsy (with a dash of Candide for good measure) before tackling his Broadway triumphs with Hal Prince and James Lapine. Reimagining Follies as a 1970s version of RuPaul’s Drag Race is delicious, while the suggestion that Into the Woods will still be around in a hundred years when we’re all deceased sent a shiver up my spine, and Poore & Jager’s witty rewritten lyrics mesh impressively with Sondheim’s original rhyme schemes.

Simultaneously singing and spoofing all of Sondheim’s notoriously challenging classics is a seriously tall order, but this troupe has the musical talents and comic timing to pull it off. You can certainly enjoy this show strictly based on the cast’s stellar singing abilities, but (unlike some similar condensed Shakespeare comedies) you really need to know Sondheim’s repertoire in-depth to get the most out of it. Inside jokes about Broadway and Orlando’s arts scene fly faster than even the most ardent Playbill collector will be able to catch; many of the references got past me, but there’s always another coming right along.

My biggest critique is that the show has three endings — a false finale, an extensive coda recounting Sondheim’s bloodiest hit, and yet another encore involving a mostly forgotten flop — which is at least one ending too many. That structural imbalance aside, The Complete Works of Stephen Sondheim (Abridged) is a can’t-miss show for devotees of the maestro, thanks to this cast of big voices who aren’t afraid to commit to the bit.